Ancient Greek Architecture - Temples, Towns and Theatres Content from the guide to life, the universe and everything 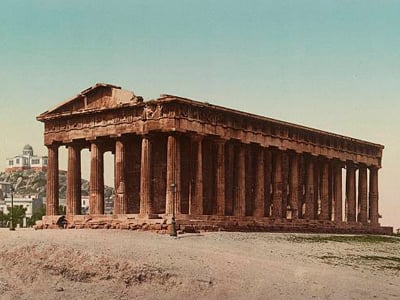 For about 1,000 years the conglomerate of what is known today as Ancient Greece was the predominant culture in the Mediterranean. It would also influence Europe for many centuries to come. The first known signs of an important culture on the territory of what is today the state of Greece are from the two Bronze Age cultures that are known as the Minoans and the Myceneans.

The Minoan culture is named after the legendary king Minos of Crete. Its most important building is the Palace of Knossos, an impressive structure originally consisting of a maze of over 1,000 rooms in buildings that were up to five storeys high. No fortifications were found. In the centre of the palace was a large rectangular courtyard; just like the many similar courtyards and open hallways in smaller buildings, it was used to access surrounding rooms. Very often interiors and exteriors were only separated by rows of columns, which led to a fluid transition. No rooms for religious practices were distinguished from others. The Minoan culture disappeared in about 1400 BC, probably because of a natural disaster.

In contrast to the Minoan culture, the Myceneans built large fortifications and a hierarchy of different building parts is visible. Symmetry and the axial approach to a building became important. With their most common building type – the megaron – the Mycenean culture laid the foundation for sacred Greek temples as well as profane houses. The megaron consisted of a single rectangular room that later acquired an added entrance hall and columns in front of the entrance at the narrow side. 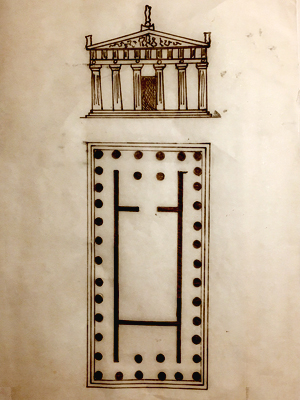 Greek temples combine aspects of both Minoan and Mycenean architecture. The buildings themselves are symmetric on an axis and there is not only a hierarchy between building parts but also the temples stand alone by themselves. On the other hand, the way to approach these temples does not follow an axis but rather happens from one side. The megaron is still visible as the central chamber of the temple, which contains the statue of a god, but the entrance hall with columns evolved into one or more rows of columns that encircle the whole temple. Only priests were allowed to enter the chamber with the god's statue; the altar for offerings was outside the temple in front of the door so the statue of the god could 'see' the offerings when the door was open.

In the beginning holy places were only marked with encircling walls. The first actual temples were built in the 8th Century BC and were made of wood and air-dried bricks. They looked like Mycenean megarons. In the 7th Century the columns from the entrance were extended to a row of columns encircling the whole central chamber, and a gable roof was added on the facade, with gables on both narrow sides1. In the 6th Century the temple appeared in its finished form with two entrance chambers (one on each narrow side) and columns on both narrow sides of the central chamber, two gabled facades, and one or two rows of encircling columns. The building originally made from wood and bricks was completely transformed to stone, while the shape stayed exactly the same and was not influenced by the change in material.

Three different 'orders' of columns were developed, each order encompassing different proportions and decorations. This did not only affect the columns themselves but also the decorations above and the distance between them.

The Doric order was the first to be developed in the 7th and 6th Century BC. It has a plumper and simpler appearance than the others. The columns sit on the floor without a base, and the shaft is fluted (meaning it has many grooves basically from bottom to top) and has a slight bulge at the bottom. A simple capital sits on the top. Above the columns there is a frieze of triglyphs (a triglyph is a rectangular ornament consisting of three vertical raised lines and creases between them) directly above the columns and centered between them. Between the triglyphs are either plain fields or reliefs. Some say the triglyphs were meant to be reminiscent of the sides of wooden beams. Above this is a relatively simple cornice2.

Ionic columns were developed in the 6th Century BC and are more slender than Doric columns. They have a round base as well as a square plate below the base. The capital has four volutes – spiral ornaments. There are no triglyphs but either just a plain frieze or an ornate relief between them. The cornice is large, cantilevered3 and exhibits many ornamental decorations.

Corinthian columns, which were developed in the 5th and 4th Century BC are even more slender. The capital gets wider at the top and is decorated with two rows of acanthus leaves which are topped by eight small volutes. Above the volutes is a plate with a flower in the middle of each side.

Symmetry and harmony of all parts was the goal. This led to certain difficulties like the corner columns of the Doric order not standing exactly below the ornament above them (because otherwise half of the column would have carried thin air) or the need for the whole temple including its base to in fact bend upwards towards its centre to visually make it appear right. While the architecture of Greek temples was based primarily on modules, they were not used arbitrarily. There were always visual corrections to make the appearance right.

It has to be remembered that, contrary to what 18th and 19th Century 'archaeologists' imagined, the Greeks lived in a very colourful world. Like other public buildings, temples were painted in vivid colours. Reliefs and statues, in particular, were intended to look more realistic and for this reason they were painted.

In later times the orders could also be mixed and were not used in the strict form they were used before. More complex building shapes with multiple storeys were developed as well as large symmetrical buildings with several terraces.

What is today known as Greece in antiquity was a conglomerate of separate city-states. A city-state is the so-called polis. Each polis had its own government and jurisdiction and often they were also in direct competition with each other. These city-states started to develop during the 8th and 7th Century BC and soon spread throughout the Mediterranean area.

The agora was the town square and marketplace of an Ancient Greek polis, a place to meet others and trade. It was surrounded by a series of unconnected buildings, standing next to each other without any greater concept. In addition to the ones mentioned below each agora also had temples and altars.

On one or more sides the agora was usually flanked by a stoa. The stoa was a long building with columns on one side and a plain wall or rooms on the other. It could be used for many different things like trade or work, as offices or for communal gatherings. Later examples are even two storeys high. Wider buildings also had one or two rows of columns in the middle and not just on one side. While outer and lower storey columns often were Doric in design, inner and upper storey columns were mostly shaped in Ionic or Corinthian design.

There were also buildings connected with democracy, providing a place for the people's assembly of a city to gather. The Pnyx in Athens, for instance, was a large platform looking down on the agora that was used for political discussions. Many important decisions were made there. It was built in different phases from about the 5th Century BC to the 3rd Century BC and in the end consisted of a speaker's platform and an auditorium similar to an amphitheatre that could accommodate many thousands of people.

Another important building at the agora in Athens was the heliaia, the surpreme court. It was a simple rectangular enclosure without a roof – like a courtyard - where the jurors conferred. Originally it may just have been a free space surrounded by a barrier.

The last important building of the agora was the bouleuterion, the meeting hall of the city council. It was a vaguely square room with benches arranged in steps, shaped in a U or half-circle. At the bottom in the centre there was place for a speaker.

During the Hellenistic period (336 BC - 0) cities became better-planned layouts with groups of buildings shaping different areas. Very often they were also arranged in different terraces on a hill. Infrastructure like water pipes and libraries became more and more important.

For Ancient Greeks theatres were not simple places of pleasure as all plays also had a religious aspect. Greek theatres were originally built from wood but later stone was used instead. Existing theatres were also rebuilt in stone. They were always built into the landscape – often with the additional bonus of providing a great scenic view for the audience. Builders used the natural shape of a hill to create stepped rows of seats for the audience, which were oriented in a half circle around free space in the centre. This circular space at the bottom of the auditorium was the orchestra, where the actors performed their piece. People of importance would have special seats right by the orchestra. Opposite the audience and behind the orchestra there was a building used as a backdrop and as changing rooms. This building could include several moving parts with scenic pictures for different settings and other stage machinery. It was called a 'skene' and could have up to two storeys.

Because of their religious significance theatres also had a temple and altar.

The Roman Empire conquered Athens in 89 BC, which meant the end of the predominance of Greek culture in Europe. Romans, however, admired the Greek arts and other cultural achievements and therefore copied a lot of the Greek artistic ideas and remodelled them for their own needs. Thus the influence of Greek architecture did not end there, but went on to inspire many future styles and ideas.

Everything floats5, but the Greeks continue to leave their impression on human culture.

Top image supplied by the Library of Congress.

1This type of temple is the so-called 'peripteros'.2A cornice is a decorative element that usually spans the whole length of a building and defines different horizontal areas on the facade. They can be located for instance above the base, below the roof, between two storeys or define a horizontal band of windows. Simple cornices are just raised stripes of plaster. More elaborate versions are built up of concave and convex shapes or even ornamental decorations that repeat many times over the length of the building.3So it sticks out from the facade rather than being fully supported by the columns.4Think 'cell' - the windowless chamber in the centre of the temple.5Panta Rhei - everything floats - a famous quote by the philosopher Heraclitus who wanted to describe that nothing ever stays the same and everything is in a constant state of flux.