Ancient Roman Architecture - Buildings for the Masses Content from the guide to life, the universe and everything

The architecture of Roman antiquity is based on both Etruscan and Greek influences. The Etruscans ruled over a large part of Italy until they were cast out in about 510 BC by the Roman Republic. The Romans also admired Greek arts and architecture but did not find them very practical. Following their conquests they even brought back architects to work for them. No buildings were thoughtlessly copied from Greek prototypes, they were always adapted to Roman needs. In many cases Greek shapes were reduced to being only a decoration for Roman constructions. The Greek orders1 were adapted by adding even more decorative elements.

During the time of the Roman Empire a vast number of buildings for infrastructure and public uses were built: bridges, aqueducts, large housing blocks, basilicas, thermae (bath houses) and theatres. Additionally there were buildings made solely for the purpose of representation, like triumphal arches and columns. Many new building types were developed for all the new achievements of the Roman culture. Very complex systems of rooms were developed to suit the needs of the public as well as private housing. Public buildings were often richly decorated with stucco, statues, paintings and mosaic floors.

Where Greek architecture saw a transformation from wood to stone and therefore vertical and horizontal lines prevailed (like beams and pillars), Romans mastered the art of building arches and vaulted ceilings, shapes much better suited to stone and bricks. Both were built with a wooden frame of the right shape onto which the bricks were laid. The frame was removed once the vault or arch was finished and the bricks could carry themselves. The art of building arches was brought to Italy by the Etruscans, but it was refined by the Romans. They regarded the circular arch as a perfect form, perfect enough that earlier Roman designs for bridges often did not only have arches but also full circles, which were completed below the water surface.

A completely new way of building was opus caementicium – Roman concrete – made from limestone, volcanic stone, and small pieces of bricks and stones that were poured into a casing of bricks, stone or wood. Elaborate wall decorations made from marble or stucco could be attached to these concrete walls or the casing itself could be made in decorative patterns. Opus caementicium was one of the greatest achievements in building history.

The Romans built streets with pedestrian crossings and fresh water pipes2 as well as sewer pipes. Aqueducts that brought fresh water to the Roman people had arches shaped perfectly for carrying the weight and could maintain a steady slope of 2% over several kilometres of pipes to keep the water inside flowing.

The Roman forum took over the functions of the Greek agora as a large square with buildings of different functions relating to urban public life. In many (planned) Roman cities the forum was placed at the intersection of the most important streets where it had space for markets, political discussions, social gatherings and matters of jurisdiction. Around the forum there were often temples, basilicas, public baths and amphitheatres. 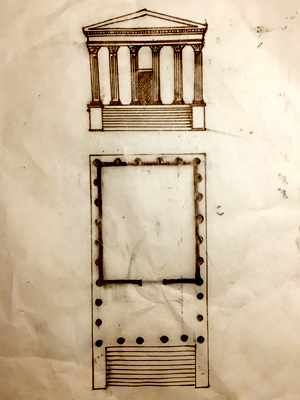 Roman temples are not only influenced by their Greek counterparts but also by Etruscan temples. They do not consist of one or two rooms symmetrically surrounded by columns but instead have a defined entrance with columns. The columns at the sides are often only decorations on the closed sides of the cella, the room where the image of the god is kept. Just like Greek temples the Roman temples were not meant to be entered by the public; ceremonies and events took place outside and only the priests entered the temple itself. The whole temple was raised on a platform with wide steps leading up to the entrance at the front, which was shaped as a portico with columns topped by a triangular gable. The back of the temple often had no decorations at all. Inside there was often a vaulted ceiling.

In addition to rectangular temples there were also round temples with a round cella encircled by columns. Round shapes or mausoleums were adapted from the Etruscan tumuli (burial mounds).

A very special temple was the Pantheon, built in 118-125 AD (after two previous versions of the building had been destroyed by fire). Its portal looks like a typical Greek temple with Corinthian columns that carry a gabled roof. This entrance however leads to a circular hall topped by a perfectly round dome with a circular hole in its centre. The round lower section of the room is divided into two 'storeys', the lower one having round and square alcoves with columns between them and the hall. The upper storey has decorative windows and pillar-shaped ornaments. The interior ceiling of the dome has been coffered3. It is made completely out of concrete. The dome of the Pantheon has a diameter of 43 metres, which was the largest dome ever built until the completion of the Hagia Sophia in 532 AD. Its dimensions get thinner at the top and are chosen for the best stability while having as little weight as possible. The complex statics4 with a difficult system of arches and pillars make the Pantheon a masterwork of architecture.

The basilica was a long, rectangular building with two rows of columns inside running along its length. Between the pillars in the middle the roof was higher than above the aisles at both sides. Because of this shape windows in the walls above the columns could bring more light into the building. Sometimes basilicas could have four aisles instead of two. The end of the nave (middle part of the building) could end in a semicircle.

The basilica could take over the functions of a covered market space, bank, court of justice or general gathering space.

Bath houses already existed in Greek antiquity. They were often incorporated in gymnasiums, the training facilities for sportsmen. The Romans much refined them and made baths one of the most important public buildings in their cities. They were not only used for cleaning the body but also socialising and doing business. There were also training facilities and massages were offered to visitors. Very often the thermae show a symmetrical layout with the same rooms for men and women. There were changing rooms and rooms with pools of water with different temperatures as well as saunas. Even public toilets could be included. Floors and some walls were hollow so smoke from an oven which was heated from the outside of the building could serve as a floor and wall heating system.

In contrast to Greek theatres, Roman amphitheatres were not placed somewhere in the landscape on a conveniently shaped hill, but were built as separate buildings in settlements. After Rome burned in 63 AD a new prototype for the Roman theatre was built: the Colosseum5. Three storeys of arcades (arches resting on pillars) shape the outside of the amphitheatre. The facade is decorated with the shapes of Greek columns of all three orders: Doric at the bottom, Ionic above and Corinthian at the top. Staircases and vaulted corridors right behind the facade distributed spectators to the rows of seats of the theatre. Sun sails attached to the inner rim at the top of the theatre brought shade to the spectators. The whole theatre was not dissimilar to a modern sports stadium.

Triumphal arches were large buildings which were erected for the sole purpose of providing visual propaganda for the current leaders. They were erected to remind of great triumphs, anniversaries, the founding of a new city and other important happenings. The large arches could be extended on all sides by adding more similar arches 'rhythmically', which became an important feature in architecture. Triumphal arches were completely covered in reliefs and inscriptions telling of the important things they should make everyone remember. On the top there were usually large statues.

A similar structure was the victory column - these were large columns on a pedestal also decorated with reliefs and statues.

Apart from a large number of amazing buildings, the Romans also gifted the world with the first work ever written about architecture. In the 1st Century BC Vitruvius wrote his still-famous work De architecture libri decem – Ten books about Architecture. In these ten books the world's first-known architecture theorist wrote about all the achievements of architecture and civil engineering of his time. Everything from temples to building materials and water pipes can be found in Vitruvius' books. His work made a lasting impression, especially on Renaissance artists and architects, as is proven by Leonardo Da Vinci's 'Vitruvian Man' and Palladio's I quattro libri dell'architettura (Four books on Architecture).

The die was cast6 for the Roman Empire. Its downfall and the rise of Christianity did not mean a sudden change in architecture. New buildings suited to the new monotheistic religion were developed from the shapes of Roman architecture.

Photograph courtesy of the Library of Congress.

1The Greek orders of columns 'Doric', 'Ionic' and 'Corinthian' were systems of specific decorations and dimensions applied to buildings.2With its fountains, baths and other pleasures involving heavy water usage, Rome in antiquity needed more water per person than modern cities.3A coffered ceiling is divided into numerous decorative sunken rectangular panels. The rectangles' frames provide full strength and support for the structure while the thinner, sunken sections considerably reduce the ceiling's overall weight.4The statics of a building define how loads are distributed on load bearing elements of a building and how these load bearing elements must be shaped and dimensioned to form a stable system - meaning the building does not collapse.5Also known as the Flavian Amphitheatre.6'The die (singular of 'dice') is cast', in Latin Alea iacta est, was, according to Roman historian Suetonius, Julius Caesar's dramatic statement before he crossed the Rubicon River into Rome on 10 January, 49 BC in defiance of an order by the Roman Senate. This phrase is often used to mean 'to pass a point of no return'.