The Birth of the Book: From Roll to Codex Content from the guide to life, the universe and everything 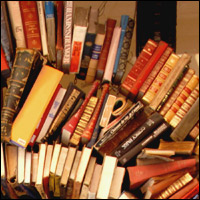 Look at the nearest book to hand. The likelihood is that it has a front and back cover, a spine between them and words printed on both sides of individual pages. This familiar form is known as a codex, but books have not always looked like this. This development is probably the most important change in the production of books prior to the invention of printing.

Before the invention of paper, the nearest equivalents were papyrus and parchment. Papyrus was usually used in rolls, and parchment for codices, but there are examples of parchment rolls and papyrus codices. Papyrus is a type of reed which grows in Egypt. The pith of the reed was extracted and crushed together to form sheets. Parchment was made from animal skin, especially sheep and cattle. It was stretched and cleaned, then cut to size. Papyrus had to be imported by other countries, but parchment could be made anywhere with livestock.

In ancient times, most information of some length was written on a roll. These were made of long sheets of parchment or papyrus (usually the latter) glued together. Customarily, only one side was written on and they were rolled up to be stored, with the writing on the inside to protect it. Contrary to how they are normally shown in films, rolls were read horizontally, with the rest of the text rolled up protectively on either side of the section being read. Text was written in columns of several inches in width, which prevented too much of the roll having to be unfurled at once. The use of rolls seems to have originated in Egypt, but spread across the Graeco-Roman world.

A standardised length, of about seven to ten metres, developed over time. Longer works would require more than one roll, which would have to be stored together and read in the correct order.

Scribes usually left big gaps at the beginning and end of the writing, as these parts of the roll were most subject to damage. The name of the author and the title of the work were written at the end to reduce damage, but this made it more difficult to identify the piece.

A codex is essentially what we now consider to be a book. Codices seem to have developed from the occasional use of tablets to write on. For shorter writings, such as notes, the ancient Greeks and Romans often used wooden tablets with a layer of wax over the top. When the message was no longer required, the top layer of wax could be scraped off and the tablet could be reused.

Sometimes several tablets were attached together to form a sort of concertina, similar to a book as we now think of them. It was not uncommon to have two tablets attached together in this fashion, but archaeologists have never discovered an example with more than ten leaves. The term used for tablets attached together in this fashion was codex. It was impractical to attach too many tablets together, so the Romans began to use small notebooks of similar design. These used parchment sheets instead of wax tablets – similar to modern notebooks. This was the origin of the book in its modern form.

From Roll To Codex

The development of the codex can be largely credited to Christianity. While other Christian texts often took other forms, bibles were almost always written in codices. This was probably because during the first few Centuries AD, Christians were still persecuted. A codex was easier to carry and conceal. They may also have been trying to differentiate their religious texts from those of the Jews, which were copied on rolls, and from pagan works, which were also written on rolls.

Codices had several other advantages. Finding a specific bit of text is much easier in a codex than a roll, especially following the introduction of page numbers – though initially, page numbers were probably used to make sure the binders attached the pages in the correct order. In addition, codices can hold a great deal more information than rolls. A codex could hold about six times as much writing as a roll could, because like modern books, they could have hundreds of pages. Codices were also more durable than rolls because of their covers, and the need to unravel a roll each time it was read placed strain on the material.

The change took place between about the 2nd Century and the 4th Century, by which time the majority of texts were being written in codices. In medieval times, rolls were usually used for record keeping, but codices for literature.

This development was by no means inevitable, but modern readers should certainly be grateful. Imagine lugging four scrolls with you to read the latest novel on your morning train commute or at the beach.