Arts of Roman Antiquity - Naturalism and Idealism Content from the guide to life, the universe and everything 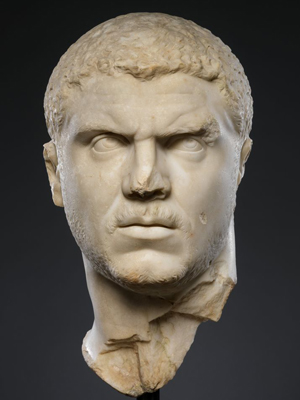 According to legend, Rome was founded in 753 BC by Romulus, who was the city's first legendary king. In reality findings show that settlements in the area of the city of Rome date back to at least the 10th Century BC.

The Roman arts style was extensively based on the arts of the Greeks but also shows Etruscan influences. Greek colonies existed in southern Italy and with the conquest of Greece, arts as well as artists were brought to Rome and many statues were copied from Greek originals. Roman paintings mostly appeared as murals and served to enhance the architecture.

In 510/509 BC the Etruscan kings were cast out of Rome, where they had reigned for a few generations. The Roman Republic was founded, with the state ruled by the Senate (Patricians) with two elected ruling members. During the 500 years of the Roman Republic a large area came under the influence of Rome. By the 3rd Century BC the whole Mediterranean was ruled by Rome, 200 years later followed Carthage, Gaul and countries along the eastern Mediterranean. The Roman law was developed and written down for the first time; this is the foundation of the laws of the western world.

Struggles for power between influential families led to the downfall of the Republic during the 1st Century BC. Julius Caesar came to power and was declared pontifex maximus in 63 BC. He became Dictator and despite his assassination, the Senate lost its influence.

After the assassination of Julius Caesar in 44 BC his adopted son Octavian (Augustus) became Roman Emperor. He and his successors expanded the Roman Empire over almost all of Europe, northern Africa and south-western Asia. In 330 AD Constantinople was made the second capital of the Roman Empire, which led to the partition into eastern and western Roman Empire and ultimately to the downfall of the whole Roman world. In 476 AD the last Roman Emperor was deposed. Instead of being the capital of the most powerful force in the known world, Rome slowly became the centre of Christianity.

Like the Greeks, Romans liked to install marble and bronze statues in public places. However, the Roman motive was to enhance their reputations and political status. Many of these Roman statues were in fact copies of Greek statues. The Romans thought no further improvement in style was necessary because they regarded Greek sculpture as perfect. There was no separate Roman style. While there was a visual development in the genre of portraits, this cannot be seen in purely decorative or religious statues. Remarkably there are no major regional differences in style throughout the whole Empire. Roman artists always worked on demand. To produce the desired sculpture they mixed Greek styles of different epochs which best served their subject and that way created something new.

In the beginning the Romans usually made complete statues or herms - plain rectangular pillars with a head and shoulders. From the 1st Century BC onwards the Romans also produced realistic portraits as busts to honour the dead. Contrary to their Greek predecessors, Roman republican sculptures were very realistic in showing the individual features of people – men and women. Even wrinkles and other imperfections are shown. Public likenesses were a way for politicians and other members of the upper classes to gain attention.

It was a Roman tradition to bring back sculptures from new territories to Rome where people could view them in public exhibitions. With the conquest of Greece statues of gods and mythical figures were imported to Rome and used to decorate temples as well as private luxury homes. As the supply of original artworks slowly dwindled and ethical problems with plundering now-Roman areas started to rise, copies of Greek statues started to be made. There were also original artworks in the spirit of the idealised Greek sculptures. Later, the Emperors also set up statues of gods in public places and in public buildings to demonstrate their generosity.

Portraits gained more and more importance as images of the Emperors were used as propaganda. The style of these images was adapted to local tastes. Idealised representations of the Emperor appeared throughout the Roman Empire and therefore other people's portraits were also more and more idealised. They still showed individual features, but signs of age and imperfections were no longer desired. The further development of portraits also led to the development of equestrian statues.

An important aspect of sculptural art during the time of the Roman Empire was also the development of reliefs which told about important deeds. Multiple colourful reliefs on a triumph arch or other structure could tell a whole story of a war or other important event. Gods, allegorical figures and historical persons could often appear next to each other in one scene to tell about an important event. A completely new type of relief came into fashion in the late 1st Century AD, when the Roman middle-class started to decorate their tombs with reliefs of all of the important things they did in their lives – like being a successful builder or merchant, etc. In the 2nd Century sarcophagi made in a Greek style came into fashion. They were decorated with reliefs of mythological scenes and later also battles. 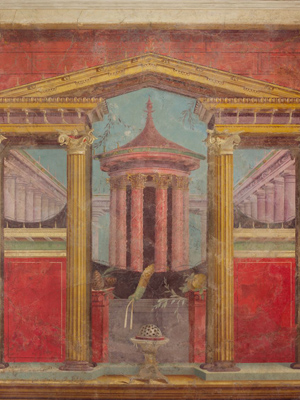 Roman houses and public buildings were decorated with marble (or imitations made from stucco), mosaic floors and very colourful paintings. These paintings were therefore no stand-alone pieces of art but served to enhance the architecture they were attached to. As these paintings were best conserved in the antique city of Pompeii - which was buried by the eruption of the volcano Mount Vesuvius in 79 AD – arts history defines four 'Pompeiian styles'.

Just like statues, Greek panel paintings1 and artists were imported to Rome after the conquest. There were also many copies of Greek pictures in Roman houses, but local tastes also always had an influence. Most of the murals were painted as frescos, meaning the paint was attached to the still-wet plaster, which made it more durable. Details could be painted in secco – on the dry plaster. Pictures were often already finished when they were attached to the right space at the wall and could also be removed again and attached at a different place. The first known paintings show battle scenes.

At the time of the first Pompeiian style (200-80 BC) walls are decorated with painted stucco that imitates a wall with a base, cornice and colourful stone blocks above.

The second Pompeiian style (80-15 BC) takes over the arrangement of horizontal zones on the wall from its predecessor. Above a base there is a zone decorated with floral garlands, masks, detailed landscapes and even life-sized people. Very often the paintings also give the illusion of alcoves and other architectural elements.

In the third Pompeiian style (15 BC–63 AD) walls are divided into vertical as well as horizontal zones. There is a defined centrepiece on each wall. Paintings often imitate Greek paintings. Illusions of architectural elements are not shown anymore.

The wall decoration of the fourth Pompeiian style (63-79 AD) continues to be arranged symmetrically, often a painting in the centre is accompanied by complex illusions on both sides, showing perspective paintings of architecture and views to non-existent places.

After Pompeii was destroyed there was still a large variety of paintings. Many so called 'mummy portraits' - paintings of deceased people which were attached to their mummies - on wooden panels or linen are maintained, they were painted with coloured hot or cold beeswax2 or in tempera, which uses pigments bound in egg yolk. Murals lost their importance in favour of mosaics. Hunting scenes with many different animals were a very popular motif. The mosaics were made mainly of small cut stones, but also other materials like glass or terracotta which were laid into wet mortar.

The Fall of the Empire

The Romans continued the Greek practice of writing about arts and tried to define them. Works of the Greek Classic and Hellenistic period were seen as superior. What is known as Roman arts today usually served a purpose and was therefore not seen as arts and not discussed by theorists.

The slow downfall of the Roman Empire and Christianisation did not result in a sudden change of art. Though the taste of Roman citizens did not change, the crisis meant that less money was spent on new art. With far fewer artworks produced, slowly, techniques were lost.