Plato - Eminent Greek Philosopher and Writer Content from the guide to life, the universe and everything 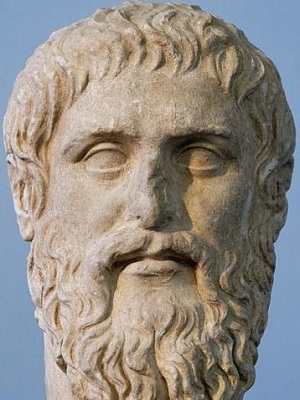 Although there have been many philosophers worthy of note, Plato is the most influential person in Western philosophy - his successors may not always agree with everything he wrote, but they almost certainly make reference to him in their own work. Plato covered a wide variety of human experiences in his books, so his work continues to provide fascination to philosophers and general readers alike.

He didn't say much about himself in his philosophical works, but there is a letter attributed to him which gives more details about his life. He was mentioned in writings by his contemporaries Aristotle and Xenophon. Also of some use in piecing together his life is Lives and Opinions of Eminent Philosophers, written by Diogenes Laertius in around 300 AD and which includes a book about him.

Plato was born in about 428 BC in Athens, Greece. A few sources say that his true name was Aristocles and that Plato 'The Broad' was his nickname, but other sources indicate that there were several people living at that time who were also called Plato, so it was not an unusual name.

Plato was the youngest son of Ariston and Perictione, both from wealthy and well-known Athenian families. When his father died, his mother remarried, and Plato grew up mainly in his stepfather Pyrilampes' home. According to Aristotle, Plato was taught by Cratylus. Cratylus in turn had been taught by Heracleitus, who believed that the universe was created from the element of fire. Socrates was a friend of Plato's family and Plato became his disciple in about 410 BC.

As the Peloponnesian War had been raging since 431 BC, Plato spent some time in military service and then moved into politics when the war ended. He mentions in his work Apology that he attended the trial of Socrates in 399 BC and was one of the people who offered to pay a fine as Socrates' punishment instead of the death penalty. The offer was to no avail. One of the speakers in Plato's dialogue Phaedo explains that Plato was unwell on the day of Socrates' death so he didn't witness Socrates carrying out his own execution by drinking hemlock.

Nevertheless, Plato was scarred by the event. He left Athens and went travelling. In Egypt, he learned about the water clock (clepsydra). This was a piece of equipment used to measure the time by recording the amount of water that passed through a narrow opening over a particular period. Plato realised the water clock's importance and brought the concept back to Athens when he returned from his travels. In Sicily, he became involved with politics again and developed his theories about government by philosopher kings that was documented in his work The Republic. In Italy, he encountered the Pythagorean School and learned of mathematics and logical thinking.

The Academy1 was the school Plato created in Athens and to which he devoted nearly all the rest of his life. His main aim was to tutor the future political leaders of Athens, to improve their minds and behaviour and hence to improve the society they governed.

The main subject that pupils of the Academy would have been taught was mathematics, in line with the Pythagorean method. Plato's name is known in mathematics as he is linked to the Platonic Solids - the tetrahedron, cube, octahedron, dodecahedron and icosahedron - three-dimensional geometric objects with all faces having the same shape. These were used in philosophy to represent the elements of the universe as the Greeks viewed them. A key concept that the Academy taught was proof by deduction from known things, which Plato made use of in his philosophical works.

Aristotle was a pupil at the Academy, as were several other well known figures in Greek history. Aristotle went on to found his own school, rather than taking up a position in the Academy, but the Academy continued after Plato died in about 347 BC, with his successor as head of the school probably being elected by a vote.

Socrates believed that writing philosophy down was not worthwhile, because teaching and learning could only be effectively carried out through face to face dialogue and discussion. Even though Plato was a disciple of Socrates, he wrote2 a considerable number of books. He wrote on a variety of topics, from mathematics and logical deduction, through love and friendship to politics.

Almost all his writing was in the form of dialogue, and many of the dialogues involved Socrates discussing topics with his younger followers. That fact has led to much academic discussion about whether the writings constitute records of Socrates' philosophy, or whether Plato was just using Socrates as a mouthpiece for his own philosophy. The truth is probably a mixture of the two. The setting of the scene of the conversations was important to Plato, as well. As a result, much of his writing is devoted to describing the location of the dialogues and the people involved.

Many of the books address two or more topics as the conversations between the main characters evolve and develop, and many of the dialogues fail to reach any particular conclusion about the topic under discussion. However, the dialogues do cause people to think, and also indicate that Philosophy is a broad subject so neither Socrates nor Plato have all the answers to its questions.

The Republic is one of the most well known of Plato's books. In it, he sets out his concept of the ideal government (formed of philosopher rulers) in a dialogue led by Socrates, and compares the ideal to other models of government that were known at the time. The book also addresses the question of what justice is, and includes some discussion of poetry.

Another section, 'The Myth of the Cave', considers the nature of reality and perception. Plato imagines a group of people chained to a wall in a dark cave who see the shadows of objects outside the cave projected on to another wall. The people name the shadows things like dog, bird, and tree. Later, one man escapes from the cave and sees the light of day. He realises what a tree is, and what the other things actually are, and understands that all he had ever seen before were the distorted shadows on the wall. He returns to the cave and tries to teach the others the truth, but they prefer the world of shadows that is familiar to them.

This is what has become known as Plato's 'Theory of Forms' - that an object in real life is actually only a representation of the true form of the object. The theory also applies to abstract objects, such as love, goodness and beauty - all real examples, such as beautiful people, are only representations of the true beauty that philosophers strive to appreciate.

Another key text by Plato is the Meno, as it introduces the 'Doctrine of Recollection'. One of Meno's slaves, who has not had any formal education, discusses geometry with Socrates. In the course of the conversation, Socrates causes him to agree that a square with an area double the size of a given square has sides of length equal to the diagonal of the given square (a special case of Pythagoras' Theorem). This process is used to argue that the slave remembered the fact from another time, before he became a human. Modern readers can see that Socrates asks leading questions, and the slave only has to use simple arithmetic and logic to answer them, so the process is not quite working as Socrates claims, although education is taking place.

The concept of 'Platonic Friendship' evolved from consideration of discussions of love and friendship in his works such as The Symposium and Lysis. Plato's writing about the life and death of Socrates, in the Apology and related books, is hugely important to history as well as to philosophy. Plato's influence is broad, extending into the realms of the sciences and the arts, and his ideas still have relevance today.

Image copyright © Marie-Lan Nguyen
1So named because the parkland in which it was situated was once owned by a legendary man named Academos.2Which is lucky for us as modern readers.