The Voyagers, the Golden Record, the Pale Blue Dot and how Tricky Dicky Trumped Thomas Jefferson Content from the guide to life, the universe and everything 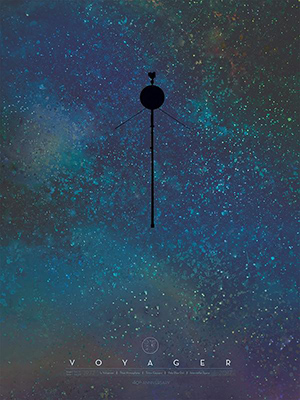 Human beings are a very curious race, that is, we're always asking questions - small stuff like, 'Have we got enough milk for breakfast tomorrow?' right on through to the big questions like, 'Is there life on Mars and is it possible for humans to go there?' One day we may know the answers but for now we're just taking baby steps into space. Astronauts have visited and walked on a tiny part of the Moon and we have sent mechanical rovers to explore Mars. Beyond Mars there have been probes to the outer planets Jupiter, Saturn, Uranus and Neptune. We even know now what dwarf planet Pluto and its family of moons look like close up, thanks to the New Horizons spacecraft flypast in July 2015. New Horizons couldn't hang around the Plutoid neck of the woods - using the momentum it had built up it's heading for the Kuiper Belt object 2014 MU 69, which should be reached in January 2019. New Horizons will keep on going. Something else we hope will keep trekking into the vastness of deep space are the Voyager probes.

The initial concept of sending spacecraft to the farthest reaches of our Solar System was proposed in the summer of 1965, when it had been calculated that all four gas giants would soon be in favourable alignment, which only occurs once in 176 years. Richard Nixon was the US president from 1969 until 1974. He was told by NASA personnel that when the last favourable alignment happened, his predecessor Thomas Jefferson had missed the deadline. A chuckling Nixon approved the go-ahead for two probes and the project work began in 1972. Each craft would carry a 'message in a bottle', just in case they happened to be discovered by any extra-terrestrials.

The spacecraft were ready to launch in August 1977. At that time there was a lot going on on planet Earth. SETI detected the 'Wow!' signal. Elvis Presley shuffled off the mortal coil - his passing caused worldwide grief and he remains an enigma. Voyager 2 was launched, followed a couple of weeks later by its twin, Voyager 1. Their missions within our Solar System have their own detailed h2g2 entry.

Voyager 1, being on a faster trajectory, reached Jupiter first in March 1979, and had arrived at Saturn by November 1980. Voyager 2 got to Jupiter in July 1979, and passed Saturn in August 1981. It then took five years to reach Uranus in January 1986 and three years later it encountered Neptune before continuing its journey out towards interstellar space at over 34,000mph. The weird and wonderful things discovered along the way by both Voyagers have kept those interested in astronomy happy for decades - eg Jupiter has a ring, Galilean moon Io has active volcanoes, Uranus spins on its side, Neptune has a great dark spot and its largest moon, Triton, orbits in retrograde motion. Triton and the other moons have their own h2g2 entry.

And here is a YouTube video of some Voyager images

SETI founder Frank Drake1, Carl Sagan and Sagan's wife Linda Salzman helped put together the Golden Record which contains the sounds of Earth. Only two copies were created - one for each Voyager. There are recordings of 55 different languages ranging from Akkadian to Wu. Greeting any aliens who might find it one day is the voice of Carl and Linda's six-year-old son Nick Sagan, who says: 'Hello from the children of planet Earth'. The records contain a diverse selection of music, songs, animal sounds such as birds singing and whalesong, and weather phenomena like crashing thunder and howling wind. There are 115 Earth-related images including pictures of people, animals, buildings, transportation, the Golden Gate Bridge, the Great Wall of China, a leaf, trees, and a sunset with birds. There are also instructions in symbolic language on how to play the record. Out of all the submitted photos, only one was rejected - that of two people, a man and a pregnant woman. You might wonder what was wrong with it but the couple were in their birthday suits, and it was deemed unacceptable by NASA.

Once the official objectives were accomplished, it was decided at the suggestion of Carl Sagan to turn Voyager 1 around and take one last look, before the cameras were turned off, at the planets of our Solar System. On 14 February, 1990, a collage of photos of our family of planets was taken. On one there was a small dot, the size of a pixel, enclosed within a sunbeam. It was the Earth. At a press conference, Sagan pointed out this pale blue dot and said that everyone we ever knew, everyone who has ever lived, lived there. All of the drama of daily life, with its greatest triumphs and heart-rending tragedies, plays out there. As far as we know, the only life in the Universe abides there. Earth is the only home we know and it's our responsibility to take care of it and leave it in good condition for future generations. Carl Sagan died in 1996 aged just 62, but the memory of his achievements lives on.

In August 2012 Voyager 1, travelling at six miles per second, left our Solar System and entered interstellar space. It was the first human-made object to leave the heliosphere, the protective bubble created by our parent Sun. For the 40th anniversary of the launches, NASA designed a special poster. Both Voyagers are carrying a little bit of all of us out into the Universe. They will likely carry on trekking where nothing from Earth has gone before, forever. They have the capacity to outlive us as a species and it's quite comforting knowing that something of humanity will still exist even after the Earth has been swallowed up by the expanding dying Sun2, provided they've not been intercepted in the meantime, of course.

1He devised the Drake Equation to estimate the chances of the possibility of intelligent life on other planets.2The Sun has enough hydrogen left to last another four billion years.