The Routemaster Bus - Big, Red and Shiny Content from the guide to life, the universe and everything 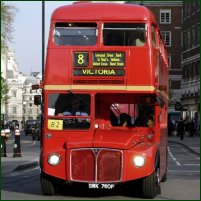 London, the capital of the United Kingdom and arguably the greatest city1 in the world, has a number of images that are famous throughout the world. Buildings such as St Paul's Cathedral, The Tower of London and The Houses of Parliament, as well as iconic figures like the Beefeaters and the royal guards in their Bearskin hats are seen on postcards sold in shops across the capital. Just as often, those postcards contain one of London's famous methods for getting around; the black cab, the tube train and the double-decker Routemaster Bus.

Although these buses are now withdrawn from regular passenger service, they remain part of the cultural history of the capital. The Routemaster was a front-engined bus, the driver sitting next to the engine in his isolated cab. The back of the bus was open on the pavement side, allowing passengers to hop on and off anytime the bus was stopped.

In the 1950s, London Transport (LT) was looking to replace its fleet of trolleybuses and commissioned AEC to build the Routemaster (or RM), which first appeared on the streets in 1959. They also replaced the similar AEC RT buses that were also being used at the time. The original design plan was for a 17-year operating life span, but the fleet was only withdrawn from service half a century after the original prototypes were built in the LT works at Chiswick.

The 64-seat RM and the extended 72-seat RML production ran to 1968, giving a total of 2644 vehicles. Throughout their history, most of the buses were fitted with new engines and refitted to extend their working life. The RML, which had an added 2ft 4in (71cm) in the centre, had a weight of 240lbs (109kg) per passenger - much less than that of most other buses.

Two luxurious versions were built for Green Line Coaches. The RMC and extended RCL had air suspension, electric doors, wider seats and were made with a higher ratio rear axle and extended fuel tank to allow running on longer routes at higher speeds.

Northern Counties, a regional operator in Northern England, ordered 50 RMFs, which were based on the extended RML but with various details changed. These were the only Routemasters to be built for running outside London.

A series of 64 coaches were also built for British European Airways. Based on the RML, the BEA RM (or RMA) had larger engines and were designed to tow a trailer up the M4 to Heathrow Airport. Although these could easily run at 70mph (113km/h), they were limited to 50mph (80km/h). These went on to serve on the X15 route in East London.

The specifications for the RM and RML were as follows:

In the 1970s, new regulations came into force. One Person Operation2 (OPO) was made legal for double deckers3 and bus companies were encouraged to purchase buses that had engines in the rear. They were also asked to buy existing models rather than commissioning their own. This spelled the end for the RM; however, it would be another 30 years before they were finally replaced. During that time, four generations of replacement buses had come and gone from the streets of London.

The design had a number of advantages over most designs that tried to replace it. The lightweight construction with a strengthened body instead of a chassis - most of the components were attached to sub-frames - gave it a weight of 7.75 tons, still a couple of tons lighter than the most modern designs. Even though it seated 64 people, it weighed around the same as the 56-seat RT bus. This light weight meant that fuel costs were significantly lower than almost all other double-decker bus designs. They also were remarkably stable and could be subjected to large angles of lean.

To many people, the biggest pain of a modern bus journey is waiting for other people to get on and pay the driver. You are almost guaranteed that some people will, after having been waiting doing nothing at the bus stop for 20 minutes, spend ten minutes searching for change to pay the driver and that at the next stop an irate passenger will spend another ten minutes reprimanding the driver for being late. These problems didn't occur with a Routemaster, as people got on and off and their tickets were checked by the conductor while the bus was on the move. People could hop on and off when the bus had slowed for traffic (normal in London) without having to wait for the nearest stop4. Drivers were also safe from being abused and assaulted by drunken passengers, though conductors weren't.

The buses were easy to maintain and were also relatively comfortable, with flat floors on each deck. However they had their drawbacks as well. Firstly, after the 1970s when one-man operation was legalised, the costs of employing both a driver and conductor had to be taken into account. Secondly, the issue of disabled travellers and people with pushchairs, prams and heavy shopping: the high entrance meant it was difficult to get on board the buses. Thirdly, there was the safety aspect: people could attempt to get on and off at any time, which could easily lead to accidents.

A prototype, the FRM1, which used 60% of the RM's parts (though it had the engine at the rear and the platform and stairs at the front) was made. However, it wasn't taken up.

British Airways, Northern General and London Country started withdrawing their buses in the 1970s. Many of their buses went into service with London Transport. LT started its Routemaster withdrawal in 1982; many buses were scrapped, reduced to skidpan and driver training duties or, in light of deregulation, sold to other operators across the country. LT stopped its process of withdrawal in 1988; by that time, RMs were in service in places such as Uttoxeter, Bedford, Clydeside, Perth, Reading, Southend-On-Sea, Halifax, Edinburgh, Southampton, Blackpool, Dundee, Hull, Carlisle, Manchester and Burnley. The recession of the early 1990s caused most of these buses to be withdrawn from service, as the companies were unable to justify the costs of employing two people on each vehicle.

LT continued with its fleet and during the 1990s installed new Scania, Cummins and Iveco engines to most of its vehicles. Privatisation saw most of the buses being owned by private bus companies; LT still owned the buses for routes 13 and 19 and leased them to operators. The Routemaster routes were put out for tender in 1997 and all but one of them continued to be operated by Routemasters. Between 2001 and 2004, 50 RMs were refurbished by Marshall Buses and Arriva London giving them another decade of life.

While Mayor Ken Livingstone had given his support to the Routemaster, pressure from disabled rights groups and government disability legislation led him to phase out the Routemaster from service. As the contracts for running the routes came to their end, Routemasters were replaced by newer double-deckers and single-decker bendy buses.

Last Stop For The Routemaster

8 December, 2005 saw the RT back on the streets, along with older Routemasters. On 9 December, 2005, Routemasters were running the 159 route like other buses; however, by mid morning, they were replaced by modern buses as they got to the garage. Routemasters RM5, RM6 (in golden livery), RM54, RM 2217 and RM 2278 took part in the final procession. It left from Marble Arch just after noon, through a crowded Oxford Street, with RM2217 arriving in Streatham after 2pm, having taken ten minutes just to turn into the depot. Along the way, the press, the public and Routemaster fans cheered the buses, while disabled rights campaigners were there to jeer.

Many Routemasters have been put into service as tourist buses; often converted to be open-topped, these can be seen touring the landmarks in many of the United Kingdom's major cities.

The big, bright red London Routemaster bus, with its characteristic front end, was a star of both the big and the small screen during its lifetime... or was it? Contrary to popular belief, the bus used in some of the most well known film and TV productions to feature a red London double decker was a London Transport RT, the Routemaster's predecessor.

Before he became a Christmas ornament, Sir Cliff Richard was the UK's leading rock 'n' roll icon. Like Elvis, he made a number of films, the most famous of which had him taking a London double deck bus over to Europe and singing catchy pop songs.

Some Mothers Do Have 'Em

Michael Crawford as Frank Spencer roller-skated behind a bus in possibly the most well known scene from Some Mothers Do Have 'Em, but again, this was an RT not a Routemaster.

As well as naming the series after one of Cliff Richard's hits, Sir Cliff is a recurring theme since Rik is a fan. In the 12th and final episode, aptly titled Summer Holiday, Rik, Vyvyan, Neil and Mike rob a bank and make their getaway in a bus, imagining themselves to be like Cliff in the film, and yes, this time it is a Routemaster.

Where Are They Now?

Routemasters have been sold off to the general public since they started being withdrawn from service. Many are in the hands of enthusiasts and museums, whereas some people have bought them as a novelty, including a 17-year-old girl from Essex.

Two heritage routes have been introduced, mirroring the central parts of routes 9 and 15. 9 runs from the Royal Albert Hall past Piccadilly and Trafalgar Square and down the Strand to the Aldwych. 15 runs from Trafalgar Square past the Aldwych, along Fleet Street and past the Monument to Tower Hill. Both routes run every 15 minutes from 9.30am to 6.30pm.

1A very valid argument is that Greater London is not in fact a city.2Where the driver issues tickets as well as drives.3It had already been legal on single deck buses for some time.4This practice was warned against, with conductors trying on occasion to stop passengers, but it still happened regularly.