Piccadilly Circus, London, UK Content from the guide to life, the universe and everything 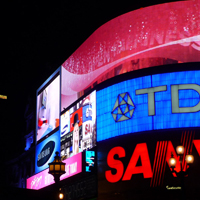 The centre-point of the West End of London, Piccadilly Circus features prominently on any tourist guide of England's capital. It should be noted that 'circus' in this case has nothing to do with animals and shows. What you'll find at Piccadilly Circus is a traffic intersection, albeit one surrounded by colourful, flashing neon advertising signs and featuring an aluminium statue officially called the Shaftesbury monument (though often incorrectly referred to simply as 'the Eros statue' due to the figure's resemblance to Eros, the Greek god of sexual love1).

Most people will find their way to Piccadilly Circus via its Underground station. Piccadilly Circus Underground lies on both the Piccadilly (dark blue) and Bakerloo (brown) lines. The station has various exits; just look out for the one that leads into the basement of Tower Records. This is a great place to meet friends because it's easy to see across the floor, which means that you can see if your friend/lover/relative has turned up. Additionally, there's something to look at while you're waiting for friends, which means it's not necessarily obvious to others that you're stuck on your own waiting for someone who might never show up.

Piccadilly Circus is near everything you would want to be near in London as a tourist. Attractions within walking distance include:

Piccadilly Circus lies on the edge of a district known as Soho. Once famous for its strip joints and seedy, back-street sex shops, Soho has recently cleaned up its act and now houses film, television, advertising and theatrical companies as well as a number of smart food outlets. Look out for a small café on Upper John Street called the Golden Square Sandwich Bar which does a lovely Penne Napoli.

Also nearby is Chinatown, which, as you might expect, is home to numerous Chinese restaurants. Most notable among these is The Won Kei on Wardour Street. It's generally regarded as the best Chinese restaurant in the city with cheap prices and, despite its rude waiters, long queues.

1The statue used to reside in the centre of a roundabout, but it has since been moved to the side. It now resides outside the well-established sports shop Lillywhites.