The Monument to the Great Fire of London Content from the guide to life, the universe and everything 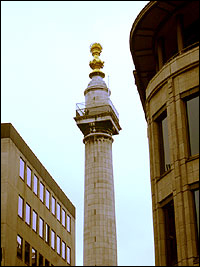 The word 'monument' is familiar to millions of people as the name of a London Underground station. The name comes from that of the pillar which is known simply as 'the Monument', and which was built to commemorate the Great Fire of London and the rebuilding of the city. The Monument is the tallest freestanding stone column in the world and has a fascinating history.

The Great Fire of London took place in 1666. The fire started in the early hours of 2 September, reputedly in a small bakery in Pudding Lane. It spread quickly and burned for five days. It destroyed most of the city, including thousands of houses and 89 churches, leaving nearly 65,000 people homeless.

After the fire, various schemes for rebuilding the city were proposed. In 1669, Sir Christopher Wren was appointed as Royal Surveyor and took charge of the rebuilding. His architectural genius can still be seen in the form of St Paul's Cathedral and the City churches. Robert Hooke, usually remembered as a scientist, was a close friend of Wren's and worked with him on many of these plans.

Plans for a memorial to commemorate the Great Fire were first drawn up in 1670. This monument was planned as a tall pillar, which would provide an impressive view over the city and would be clearly seen from London Bridge. A location was chosen on Fish Street, just 202 feet from the site in Pudding Lane where the fire is said to have broken out.

The final plan seems to have been a collaboration between Hooke and Wren. It took the form of a simple Doric column of Portland stone, with a viewing balcony on top. It took six years to build, from 1671 to 1677. The ornament for the top was the subject of much discussion. Wren originally planned a phoenix, but later felt that the spreading wings would be dangerous in high winds. He then favoured a statue of King Charles II. The final choice was the alternative preferred by the King, a simple copper urn with gilt flames.

The column is 202 feet in height, to match its distance from the reputed origin of the fire. Inside, it has a cantilevered stone staircase around a central well. 311 steps lead to a viewing platform 160 feet (50m) above ground level. The steps continue inside the pillar above the platform, and finally there is a vertical ladder through the flaming urn to a trapdoor at the very top of the Monument.

The dual purpose of The Monument, forgotten since the days of Wren and Hooke, was first recognised in recent times by the historian Lisa Jardine1. The Monument was designed as the setting for a series of physical experiments which needed heights. There is a cellar laboratory directly below the ground floor, designed by Hooke and Wren.

Hooke was already interested in the idea of a zenith telescope, which would make exact measurements of a selected fixed star. He hoped to discover evidence of the Earth’s annual motion about the Sun. The design of The Monument allowed it to be used in this way: the cellar laboratory could be used by the experimenter, while the hollow shaft could be opened to the night sky by a hinged trapdoor in the urn at the top. Unfortunately, this type of building was not stable enough to give the required accuracy of measurements, so Hooke was unable to use the Monument as he had planned.

The Monument is maintained by the Corporation of London. From 10am to 6pm daily, visitors can climb the 311 steps to the observation platform, 160 feet (50m) above ground level. This gallery originally had a simple railing, and was the scene of a number of suicides. After a maidservant threw herself over in 1842, the gallery was fully enclosed. The view of the City of London is still impressive. There is no access for the public to the underground laboratory or the steps and ladder above the platform.

As a monument to the Great Fire, the pillar is now an historical curiosity. It is still a good viewpoint, but no longer dominates the surrounding area. In the 21st Century, perhaps it should be recognised as a monument to the scientific as well as the architectural achievements of Hooke and Wren.

1To read more about this, try Jardine's book On a Grander Scale, the Outstanding Career of Sir Christopher Wren Harper Collins, 2002.