The Secret Policeman's Ball Content from the guide to life, the universe and everything 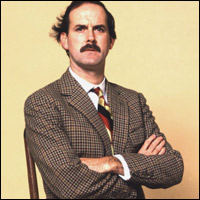 In 1976, representatives of a young charity called Amnesty International asked one of its supporters if he could think of any ways to raise money for the organisation. The supporter suggested he round up a few mates and put on a show, which, on the face of it, wasn't a very inspiring prospect. Fortunately for all concerned, the supporter was John Cleese and his friends were pretty much the cream of British comedy. The first show was a comic triumph, and the rest, as they say, is history — except for the bits that haven't happened yet.

Amnesty is an international human rights organisation. Founded in 1961 by a British lawyer called Peter Benenson (1921 - 2005), it campaigns for the freedom for political prisoners, and opposes human rights abuses such as torture. The charity's logo is a candle surrounded by barbed wire.

Arrive outside Anne's at about 10.00 for the first read-through of material for an ambitious charity show in aid of Amnesty International. As I'm parking outside Park Square East, I nearly run over Jonathan Miller.
– Michael Palin's diary, Monday 2 March, 1976.

This first show was directed by Jonathan Miller and organised by Cleese, whose job was largely to pull together a cast. Provisionally titled 'A Poke in the Eye (With a Sharp Stick)' and later televised under the title 'Pleasure at Her Majesty's', it set the bar extremely high from the start. The cast was dominated by the twin bastions of 1960s and 1970s British comedy: the Beyond the Fringe1 team, minus Dudley Moore, and the cast of Monty Python's Flying Circus, shorn of Eric Idle. With this stellar and distinctly Oxbridge2 line-up, it perhaps isn't surprising that the first show took a traditional revue format: a series of sketches interspersed with an occasional musical interlude.

The highlight of the show was probably Python's 'Courtroom sketch' with a lugubrious Cook (in for Idle) playing off against the manic rage of Cleese's prosecutor quite beautifully. Other classics included 'Custard pie', 'The dead parrot sketch', 'ASP', and of course 'The lumberjack song'.

Backstage, the cast were being recorded by a camera crew and Cook started a book on what time the show would finish. The first night, appropriately falling on Thursday 1 April3, ran until 2.15am!

Widely regarded as two of the finest sketch performers of their respective generations, these giants of English comedy would have a major role to play in the series of shows. They provided some of its most memorable moments and were the two longest serving cast members, as well as a formidable partnership.

As well as initiating and, for a number of years, organising the shows, Cleese starred in each of the first six, making the most appearances of any performer to date. The shows gave vent to his full range as a performer. As well as his famous 'Basil Fawlty' rage (usually directed at the oblivious Cook, as in 'Interesting facts'), he also played a fine Oxford philosophy don opposite Jonathan Miller, a proud Yorkshireman in the classic 'Four Yorkshiremen', and an extremely dull beekeeper being interviewed by a demented Rowan Atkinson4.

In 1987, when Stephen Fry and Hugh Laurie announced that 'Jim Cleese' was the winner of the 'Silver Dick' awards, Cleese (playing himself) came up to receive it and burst into tears of shame and humiliation as the pair began quizzing him about where his career had all gone wrong. Cleese surely deserves to be associated with The Secret Policeman's Ball more than anyone else.

With four shows to his name, Cook made his share of appearances and marked them all with his brilliance. He's perhaps the performer, more than any other, who deserves the title of comic genius. Often drunk, frequently uncertain of the precise script and, as a result, given to flights of comic inventiveness, Cook would often throw his fellow performers — especially the meticulous Cleese, who generally regarded improvisation as something you did in rehearsal. Despite this, Cleese wasn't above throwing changes into the mix, particularly at the thought that it might break the composure of old friend and colleague Palin.

Cook's masterful timing and delivery rarely let him down. One of his high points came at The Ball in 1979. After the first night's show, a review complained that the show was merely a collection of old sketches and the cast were reluctant to produce anything new and challenging. Cook's response was 'Entirely a matter for you'. The sketch picked up on the trial of Jeremy Thorpe, lampooning the judge's summation and, as Cook saw it, ludicrous display of partiality in favour of Thorpe. As usual, it was comedy with the most perfect timing and delivery.

This is an ideal opportunity. What with you being there and me being here. Seize it.
– Peter Cook as Sir Arthur Streeb-Greebling

Cook's last appearance was at The Ball in 1989, and saw him finally perform for Amnesty opposite his long-time comedy partner Moore. The pair gave the audience the 'Frog and peach' interview, as well as their own immortal sketch 'One leg too few'. It was a suitable way for Cook to make his final bow for the series. He died six years later.

The Evolution of Comedy

For the next few shows, the format — comedy stars performing their most popular sketches — continued, augmented by some major musical names such as Pete Townshend, Eric Clapton and Jeff Beck. But The Ball had always hosted the best of British comedy and this was drifting away from the traditional comic stable of Oxford and Cambridge revues. Fry and Laurie continued the tradition with some of their material, but the future was announced in 1981 when The Secret Policeman's Other Ball introduced a young Liverpudlian comedian called Alexei Sayle. Sayle was the compère of London comedy club The Comedy Store — the vanguard of the new 'alternative comedy' that was to sweep Britain.

This comedy was essentially traditional stand-up (standing in front of a microphone telling gags to an audience) but generally rejected the more traditional build-to-a-punchline formula in favour of a more rambling style in which jokes tended to turn up when they were ready. The Store also operated a strict 'no sexist no racist' policy that would be a hallmark of the new wave of comedians. These were the people who would become the new stars of comedy.

By the 30th anniversary show in 1991, celebrating three decades of Amnesty, the bill featured the likes of Frank Skinner, Mark Little (still, whether he likes it or not, most famous for being Joe Mangel in Neighbours), Julian Clarey and Jonathan Ross. It did, however, slightly let itself down with Rick Astley and Paula Yates. After cramming seven shows into 15 years, it seemed as if the last person had turned the lights off when they left. The Ball's long run was over.

A decade passed. Then, when all (well, alright, not all, but, you know, some) seemed lost, it was back.

In 2001 the comedy baton (which is probably some sort of humorous shape) passed to Eddie Izzard, another of these alternative comedy types. The show, now entitled We Know Where You Live, rounded up the likes of Harry Enfield, Vic Reeves, Phil Jupitus, and even Alan Rickman. The format was mainly stand-up from the stars, but there was a nod to the show's illustrious heritage when Izzard, Reeves, Enfield and Rickman delivered a deliberately hammy rendition of the classic 'Four Yorkshiremen' sketch.

The Goodness Gracious Me5 cast performed their 'Going out for an English' sketch — their most famous, depicting four young Indians going to an English restaurant in Bombay and behaving precisely as a group of young English people might in an Indian restaurant in the UK.

Five years later, in 2006 (for those of you who can't count), came another show. This was dubbed 'The Ball in the Hall' after its venue, London's famous Royal Albert Hall. Izzard took up the reins again and assembled another stellar cast including Patrick Stewart, Chevy Chase, Buffy star Seth Green, as well as Natalie Imbruglia, who joined Johann Lippowitz for his mime to her hit 'Torn'. Richard E Grant headed an all-star cast for a Cluedo whodunit. But perhaps the most striking addition to the show was the final performance from actor Jeremy Irons. He announced 'a different kind of stand-up now — no jokes' — and proceeded to talk through, with reference to a large screen, several specific cases of human rights abuses on Amnesty's books. The audience were duly reminded of why they were all there.

There isn't really any way to make this exciting or jazzy (which isn't so bad if you don't like jazz), but, for those who want to know, here's a show-by-show list with title, year and venue. It won't take long, promise:

1A revue put on by the organisers of the Edinburgh Festival and featuring Peter Cook, Dudley Moore, Jonathan Miller and Alan Bennett. The show was a huge hit and was widely credited with a shift in cultural ideas and the so-called 'satire boom'.2A word used to denote the frequent association, in areas such as the civil service and the Arts, of the universities of Oxford and Cambridge.31 April is traditionally April Fools Day, a day for playing tricks on your friends or, if you prefer, enemies.4Star of Blackadder.5Goodness Gracious Me was written and performed by an Indian cast, and mainly lampooned Anglo-Indian culture, such as the habit some Indians have of anglicising their names or demanding their children be doctors and lawyers.