Dudley Moore - Musician, Comedian, Actor Content from the guide to life, the universe and everything 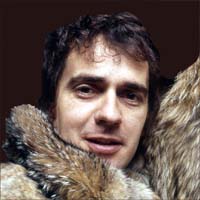 Dudley Stuart John Moore was born on 19 April, 1935. Coming from a working class background, this Dagenham lad was to struggle through his early childhood with a clubfoot and a mildly deformed left leg. Even after many corrective operations, he still had to run the gauntlet of name-calling and bullying. It is little wonder that he hid behind his musical talents.

As a six-year-old, Dudley sang in the church choir and from the age of eight was taught the piano - he really wanted to learn the violin, but his parents persuaded him to try the piano first. He did learn the violin when he was about eleven years old. Each Saturday morning he attended the Guildhall School of Music, where he was given aural training and lessons on the violin. It was at this time he learned the history and appreciation of music. From about the age of 14, Dudley played the church organ at weddings.

At about the age of 17, Dudley was advised by his headmistress to apply for a scholarship for Oxford or Cambridge. He was immensely proud to gain the scholarship for Magdalen College, Oxford. This three-year course gave him his Bachelor of Arts degree in Music. He was also a member of their jazz club and would often be found in the Student's Union cellars.

Remaining at Oxford for a further year, Dudley obtained his Bachelor of Music degree in composition before leaving Oxford at the age of 22.

At first, Dudley thought he would become a music tutor. Yet, by chance, he was to wander further down the road of jazz when a friend put on a record of Erroll Garner's The Way You Look Tonight.

I was just bowled off my feet by it. I'd never heard anything like it before. There's something so complete and rounded in his playing that it struck me immediately I heard it. In fact, he is, and will probably continue to be, one of the most complete of all pianists.

During the late 1950s Dudley joined the Vic Lewis Band, and then the Johnny Dankworth Jazz Orchestra, with whom he toured the States for a year. Upon his return, Dudley formed his own trio with Pete McGurk on bass and Chris Karan on drums. They recorded a number of times for Decca Records.

Dudley joined Peter Cook, Jonathan Miller and Alan Bennett in the comedy revue Beyond the Fringe at the Edinburgh Festival in 1959. The revue then played for two years in London before going to Broadway for a further two years. It was thought to be one of the greatest group comedy talents to emerge from Britain.

It was during the Edinburgh Festival that Dudley practised for hours on the piano, trying to emulate Garner's interpretation and style.

I remember the first time I got a glimpse of the style, how it felt to play it. The action of the right hand dragging behind the left, then the left dragging behind the right had sort of evaded me...suddenly it seemed to come. And it was almost as if I could see both hands doing separate things at the same time, which I hadn't been able to until then...I gained a lot from his approach to the piano, which is very earthy and outgoing as well as being very rich and full of contrasts.

Dudley's friendship with Peter Cook continued and when Cook bought out a Soho strip club in 1961, he turned it into The Establishment Club, which featured among its regular guest stars Frankie Howerd, Lenny Bruce and Barry Humphries. The Dudley Moore Trio played jazz for their audience in the cellar.

Peter Cook and Dudley Moore continued to work together throughout the 1960s. In 1965 the BBC booked them for several shows called Not Only....But Also, which showed their comic genius. It also gave Dudley a regular spot playing the piano. The cloth-capped idiots were to become icons. Peter Cook used to ad lib in some of their sketches, in an effort to make Dudley giggle or lose his lines - in theatrical terms this is known as corpsing. Dudley would often be seen struggling not to smile or laugh, and just as often, he corpsed! Their signature song 'Goodbye' was to become a national favourite. The duo's popularity ensured this series made an annual return to the television screens for the next five years.

Off screen, the duo created Derek and Clive; a pair of foul-mouthed bigots. Using 'adult' language and material, their recordings were only meant as a private joke. Soon the recordings were being circulated among the public. Seeing another business outlet, Peter Cook wanted to do more recordings. Dudley was reluctant as it could have damaged his career in the States.

The comedy duo teamed up again for Behind the Fringe in 1971. It was a resounding success in London, and went on to become a smash hit on Broadway during the 1973 - 74 season. They were given a special Tony award for their 'unique contribution to the theatre of comedy'.

Dudley went on to make a number of films with Cook during the late 1960s. With his musical talents he was called upon to compose film scores and so, during the mid-1970s, this became his full-time career. Cook returned home to Britain, as Dudley settled into his new life in Southern California. Their comedy partnership ended in 1977, except for their charity concerts for Amnesty International which was eventually immortalised on film in 1979 as The Secret Policeman's Ball.

While attending a therapy group for stress, Dudley met the film director Blake Edwards, who persuaded Dudley to take over the lead role in the 1979 movie, 10, opposite Bo Derek. George Segal had walked out on the production. Dudley made it a hit. Just two years later, he had another big film hit with Arthur, co-starring with Liza Minnelli, with Sir John Gielgud playing the role of his butler. Dudley was to receive an Oscar nomination for his role of Arthur.

During the 1980s Dudley released several albums of piano-based jazz between his film and stage work. It was during the early 1990s that his musical career was put on hold, while he concentrated on films. Unfortunately, Dudley would never quite manage to achieve the promise and success shown in his first big films. In 1995 he was fired from The Mirror Has Two Faces, produced by Barbra Streisand, because he couldn't remember his lines.

During 1990, Dudley achieved further recognition of his musical talents, co-starring with Sir George Solti in a Channel 4 series about the orchestra. His musical interests didn't lie entirely in jazz; Dudley was also a recognised classical pianist and composer. In 1993, he performed his Concerto with Michael Tilson Thomas conducting. It was about this time that Dudley experienced a number of minor heart attacks. He was found to have a hole in the heart, which surgery was able to correct.

During his concert tour with pianist Rena Fruchter, she noticed that when they played their duets, Dudley was beginning to play erratically. In May, 1999, he was to receive his diagnosis.

Rumours began to circulate that Dudley had a drink problem as his speech was slurred. Then, that he was on drugs, because he appeared to be stumbling and erratic when he was seen outside of his home.

Eventually in September, 1999, Dudley told the public of his debilitating illness. He had developed Progressive Supranuclear Palsy - an extremely rare, incurable condition affecting the function of the brain.

Whenever he was beset by depression or other illness, Dudley always returned to his music. He would find solace at such times in composing, or playing music. Tragically, his illness was to take away the joy of playing as his fingers stiffened and his eyesight weakened and blurred. He began to lose his balance and had difficulty speaking.

Dudley threw himself into raising funds for research into the disease and raising awareness of its symptoms. The Dudley Moore Research Fund for Progressive Supranuclear Palsy was the charity he formed.

Dudley released Live From The Aircraft Hangar, which is a collection of his previously recorded concerts. In April, 2001, Dudley held a gala concert in Carnegie Hall, New York, on his 66th birthday, which raised funds for PSP research.

Commander of the British Empire

In June, 2001, Dudley was proud to be named in the Queen's Birthday Honours list; he headed the 'Arts and Entertainment' list. Despite his illness, in November he travelled to Britain and received his medal from Prince Charles at Buckingham Palace.

Not Only... But Also

This well loved entertainer died at his New Jersey home on 27 March, 2002.

We wish you all 'Goodnight'