Barry Humphries - Comedian Content from the guide to life, the universe and everything 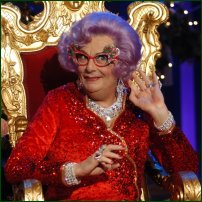 Barry Humphries is an Australian comedian who uses satire1 in his work as a character actor. He is well known for playing Dame Edna Everage (a housewife from Melbourne) and Sir Les Patterson (cultural attaché to the Court of St James), but there are many other characters in his repertoire:

These characters usually appear only in Humphries' revues, but Edna Everage and Sir Les Patterson have also been spotted on chat shows such as the British programme Parkinson, in American television series like Ally McBeal and even in pantomimes and musicals. Humphries plays Edna Everage with campness, while maintaining a straight face. Although he is dressed up as a woman, Humphries is determined not to be associated with drag acts. Edna Everage has even hosted her own British talk show, An Audience with Dame Edna, and Humphries has created a whole biography on her.

Away from these characters, Humphries is a man with two sons and two daughters. He loves reading, writes books and scripts for films, produces films and creates artwork. Humphries is particularly interested in the Dadaist art movement, to which he was first introduced by Robert Motherwell's 1952 anthology The Dada Painters and Poets. He has since used it in various productions, shows and acts.

[I would] disguise myself as different characters and I had a whole box of dressing up clothes... Red Indian, sailor suit, Chinese costume and I was very spoiled in that way...

Humphries was born on 17 February, 1934 in Kew, Melbourne, Australia and grew up in Camberwell. He was spoilt by his family, who tended to his every need. His father (a wealthy construction manager) was rarely there for him, so Humphries had to find a way of entertaining himself. One of his favourite pastimes was dressing up, which created an opportunity for the appearance of his first alter-ego, Dr Aaron Azimuth. Humphries also enjoyed reading and creating art, much to the disappointment of his parents. At one point his mum even gave away his books to the Salvation Army, saying that he'd already read them. Undeterred, Humphries rebelled against his parents and became a collector of rare books, a painter, a theatre fan and a surrealist.

It was quite hard teaching me because I interrupted a lot and didn't always do my homework.

Sunny Sam, as his parents called him, attended Camberwell Grammar School before moving to Melbourne Grammar School as his father's building business prospered. Humphries excelled in art and humanities, but his skills in mathematics and science left much to be desired. As a youngster, Humphries also had fun pulling pranks such as jumping onto a bus and kicking his accomplice, who pretended to be a blind man; imitating being sick on an aeroplane, only to then eat the contents; and pretending to be a tramp drinking from a bottle found in a bin, when he had placed it there prior to the stunt.

...entertaining people gave me a great feeling of release; making people laugh was a very good way of befriending them. People couldn't hit you, could they, if they were laughing.

When Humphries was old enough, he attended Queen's College at Melbourne University, where he studied law, philosophy and fine arts and appeared in university revues with songs and sketches. During his time at university, he created many pieces of satirical art, including an exhibit entitled 'Puss in Boots', which featured a pair of Wellington boots filled with custard, and a pretend pesticide called Platytox that claimed to eradicate the protected platypus.

After a couple of years at university, Humphries dropped out and pursued a career in performing arts, touring with the Melbourne Theatre Company. It was then that he created the character Edna Everage, through the sketch 'Olympic Hostess' that first appeared at Melbourne University's Union Theatre on 12 December, 1955. She was based on a woman who had appeared on the back of a bus while a twenty-year-old Humphries was playing a character from Twelfth Night.

My mother used to say that there are no strangers, only friends you haven't met yet. She's now in a maximum security twilight home in Australia.
— Dame Edna Everage

Humphries went on to appear at Sydney's Philip Street Revue Theatre and played Estragon in Waiting for Godot before sailing to Venice, Italy in 1959 and then moving to London, where he appeared at the Establishment Club, wrote for the magazine Private Eye2 and took part in the musicals Oliver! and Maggie May, in addition to Spike Milligan's stage and radio productions, such as The Bed Sitting Room. During his time in London, Humphries made many friends, including Dudley Moore, Peter Cook, Alan Bennett, Jonathan Miller, Spike Milligan, Dick Bentley, Willie Rushton and John Bluthal.

Never be afraid to laugh at yourself. After all, you could be missing out on the joke of the century.
— Dame Edna Everage

At first, people didn't take to Humphries' satirical sketches. His first revue, A Nice Night's Entertainment, which appeared in 1962, was hugely disliked. Nevertheless, Humphries was determined to make it in the world of show business. In 1967, he ventured into film for the first time, appearing in Bedazzled and later in The Bliss of Mrs Blossom (1968). He also appeared in BBC-TV's The Late Show, but he was always aware that his real passion lay in doing revues and playing Dame Edna Everage, despite the fact that he had previously been unsuccessful.

Then, in 1969, Humphries' revue Just A Show at the Fortune Theatre did better than all of his previous revues put together. It led to a cult following, the BBC television series The Barry Humphries Scandals and a role in Monty Python's Flying Circus. The following year, Humphries returned to Australia, where he took part in a film called The Naked Bunyip3 and The Adventures of Barry Mackenzie, which featured a whole line-up of celebrities. On the surface, Humphries appeared to be doing very well for himself, but underneath this façade was a man who had a relationship with the bottle and drank till the death of his first and second marriages, before being hospitalised. Since leaving hospital, Humphries has abstained from drinking alcohol and even tried to help his friend Peter Cook stop drinking.

Despite his battles with drink, Humphries remained successful. During the 1970s, he appeared in a variety of films and shows, such as A Load of Olde Stuffe (1971), Percy's Progress (1974), The Great McCarthy, At Least You Can Say That You've Seen It (1974 - 75) and Barry Mackenzie Holds His Own (1974), in which Edna Everage received a Knighthood from Prime Minister Gough Whitlam. Humphries also appeared in the sequel to Sergeant Pepper's Lonely Hearts Club Band and The Rocky Horror Show.

Following the success of the London production of Housewife, Superstar! at the Apollo Theatre in 1976, Humphries decided to try his hand at captivating American viewers, but was met with as much success as in his first days in revues in London. It wasn't long before Humphries returned home with the explanation:

When the New York Times tells you to close, you close.

Humphries next show to appear was Isn't It Pathetic At His Age (1978), which, like many of his revue titles, is reflective of his mother's utterances to him as a child. He was also in several theatre productions of his own and toured in Scandinavia, Germany, the Netherlands, Asia and the Middle East, and ended up in his home country with a tour entitled Getting Back To My Roots (And Other Suckers) in 2003.

To live in Australia permanently is rather like going to a party and dancing all night with one's mother.

Over the years, Dame Edna Everage has been the most popular character in Humphries' repertoire — by this time, she has her very own full-length life story to tell. The clothes that Edna wears are created by designer Bill Goodwin. The clothes reflect all that is Australian, such as the flag, its animals and the Opera House. Madge Allsop (Emily Perry) has been the only person to appear next to Everage in her acts.

[Edna Everage is] a perfect parody of a modern, vainglorious celebrity with a rampant ego and a strong aversion to the audience (whom celebrities pretend to love but actually, as Edna so boldly makes transparent, they actually loathe for their cheap shoes and suburban values).
— The Sydney Morning Herald

During the 1990s, Humphries took part in a range of television productions, including the children's comedy The Bunyip for Channel 7 in Melbourne and The Dame Edna Experience for London Weekend Television. Due to these popular programmes, Humphries won the Golden Rose of Montreux in 1991. Humphries also appeared in The Life and Death of Sandy Stone, Dame Edna's Neighbourhood Watch (1992), Dame Edna's Hollywood, Dame Edna Kisses It Better (1997), Spice World (1997) and Barry Humphries' Flashbacks (1999).

She likes 'Ally McBeal', particularly because Ally McBeal likes her. And she single-handedly brought the series to a close by appearing as a guest actress on the programme.

With the arrival of the new millennium, Humphries took his alter-egos to the US. Of course, Edna Everage was seen by the audiences there and Humphries soon found himself being asked to appear in Ally McBeal and write for Vanity Fair. Humphries' article in Vanity Fair was a response to a reader's question asking whether he could learn Spanish:

Forget Spanish. There's nothing in that language worth reading except Don Quixote, and a quick listen to the CD of Man of La Mancha will take care of that... Who speaks it that you are really desperate to talk to? The help? Your leaf blower?

Humphries' comment was met with a huge response of angry Hispanic readers, to which Vanity Fair responded with an apology. This was not the only event to stir emotions, for controversy came about on the eve of his 2003 Australian tour.

When I was offered the part of Frida I turned it down, and she was the second choice. I said 'I'm not playing the role of a woman with a moustache and a monobrow, and I'm not having same-sex relations on the screen...I'm not racist. I love all races, particularly white people. You know, I even like Roman Catholics.

In 2006, a set of stamps was created of Dame Edna Everage and Humphries punched a photographer, called a statue of Edna Everage into question (calling it too racey) and was given the key to Melbourne, where he was born.

I was born in this lovely town and I've never had a key to it. I've always snuck in while the door was ajar.

Over the years, Humphries has achieved a variety of awards, such as:

1A literary technique which pokes fun at its subject.2Humphries created the famous cartoon strip The Wonderful World of Barry McKenzie for Private Eye.3A Bunyip is a character that the Australian Aborigines created.