Dominoes Content from the guide to life, the universe and everything 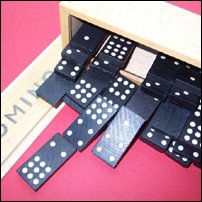 Dominoes is an ancient game, believed to have originated in China, with records dating back to at least 1120 AD. It is believed to be much older than that. It is thought that the game evolved from dice but in a flat two ended plane. Dominoes are elongated rectangular shapes divided into two equal-sized squares, each regular end measuring 25 mm square, making 50 mm by 25 mm in total, with a line carved or painted across the centre. This line is sometimes called the 'Waist'. This may also contain a brass pin known as the Spinner. On the face of these squares are carved or painted dots, or pips, representing the numbers from one to six. There are also dominoes with a corresponding number of blank faces. The number of dots decreases with each domino, starting with double six, then six-five, six-four, six-three and so on down to double blank so that every number is included. Individual dominoes are variously known as bones, cards, tiles or stones. A full double six set comprises of 28 dominoes. It is believed that the game was introduced into the UK by French prisoners of war from the Napoleonic Wars, and is allegedly named after Priests' black and white hoods, called 'Dominoes'.

Dominoes were originally made of bone or ivory, with a bamboo backing. The pips were either ebony inserts or a cross cut to represent a dot. Modern dominoes are often made of wood or white plastic resin with black pips or a black compound with white pips. However some have coloured pips, usually to assist children in playing, while others may be made of stiffened card.

As with other games containing various pieces, such as playing cards or dice, there are a variety of games that can be played with dominoes. The most basic form is the Standard or Block game, and its variant, the Draw Game. Two other popular games are also detailed below.

How to play Block and Draw Dominoes.

The player with double six starts play by placing it, face up, on the table. If this domino is not to hand, then double five is called for and so on down the doubles until a double is playable. If no double is played then the dominoes are returned and reshuffled and a new draw takes place.

Once a double has been played, the object of the other players is to match the ends showing, and play dominoes that match either end to clear their hand. All the remaining tiles are kept in an area called the boneyard. Play starts with the player to the left of the player who played the double. Checking their dominoes, if a domino has a matching end to the double, it is played at the corresponding end. Once played, the player takes a replacement domino from the boneyard, hence the term bone. There is a possibility that the expression came from the material that dominoes were once made of.

Play continues around the players until a Player has used all the dominoes in hand. If there are no matching dominoes in hand, then a domino is taken from the boneyard, and that turn is forfeited and passed to the next player.

It is usual for a player, when reduced to one domino, to spin their last domino to indicate that the player may go out on the next turn. This is usually only possible with decent dominoes with the brass pin in the centre. The ideal ending of the game is for a player to 'Chip Out' which is where a player has a single domino remaining in the hand which matches one of the ends in play, so ending the game with no dominoes to hand. The players with dominoes remaining add up the dots or pips on their dominoes and these are allocated to the winning player. If the winning player has dominoes remaining then the remaining pip or dot value is deducted from the allocated total. Play continues until a predetermined total is reached, the player with the highest score being the ultimate winner.

Scores are often kept on a Cribbage board, and a score total of 61 or 121 is often chosen, equal to a game of Cribbage.

There is a variation to this game called Draw dominoes. It follows the same game as above except, if a player cannot play a domino, then that player draws from the boneyard and continues to draw until a domino is picked that can be played.

How to play Fives and Threes

This game begins in the same way as the basic game, except that the first domino laid may be any in the player's hand. The objective is to play so that the sum of each end can be divided by either three or five, depending on the game being played. As an example, if the first domino laid is double-six, and threes are being played, then the player would score twelve, as 6 + 6 = 12. This score is added to on each play. Play continues until the predetermined total is reached by one of the players, who becomes the winner. Fives are played in the same way. The top score for a single play is 8 (double 6 and 3, or double 5 and 5) This is achieved by scoring 15 (3*5 and 5*3) The scores are usually recorded on a crib board, so 121 is the usual required end target. A pad of paper is just as easy The game can be played between two players but is normally a game for 4 people playing as 2 teams of 2. It can be played by 3 people, each trying to reach 121.

With any of these games, an additional rule may be played, called 'Muggins'. This is where a player scores points, but does not claim them, and play is about to continue. Any player, who notices, may call 'Muggins' and score those points for themselves.

There are strategies that can be used when playing these games. The main one is to block play. This is carried out by noting which dominoes opponents are playing or, more importantly, are unable to play. By careful calculation of what dominoes have been played, and so calculating the dominoes still in play, it is possible to determine which domino to lay from the hand which will force opponents to either play a domino that will enable an out, or to force the opponent to miss a turn.

For those bored with the double six set, there are now double nine sets with 55 dominoes, and double twelve sets with 91 dominoes. With double nines, play takes the form of a cross, i.e. the dominoes are played on each end and also off the waist. Double twelves work off each end, but also off each corner, in the form of an asterisk. There are many other variations of the games shown above.

In a number of instances, gambling of various levels, may occur. One popular form of gambling is by adding the pips remaining in each hand and paying the winning player the sum value of the pips at their chosen value1.

This is a triangular variation of Dominoes, produced by Pressman Toy Corporation, N.Y. c1970, and is still popular today. The game is a special favourite of children. The tiles are often made of card, although plastic, spinner-style Triominoes are also available, with a Scrabble-style tray to hold them. There are 56 Triominoes per game, with numbers ranging from 5 to 0 on each corner. Play is different to conventional Dominoes, as outlined below.

The game is played between two and six players. The tiles are laid face down and shuffled, as with dominoes, and then players draw from the boneyard, or 'well' as it is known in this game. If there are two players, then nine tiles are drawn, three or four players will draw seven tiles, and five to six will draw six tiles.

Play starts with the highest triple, working downwards until a tile is laid. If no triple then the highest tile is laid. Play works clockwise with each player adding a tile if possible. if no play can be made, then a tile is picked from the boneyard, and play passes to the next player.

When a tile is laid, then a score is calculated. A triple will score the sum of the three corners, with an added bonus of 10, for being a triple. If triple 0, then 30 points plus 10 point bonus are scored. Non-triple tiles score the value of the three corners. There are additional bonus that can be scored.

Dominoes have been used, on many occasions, in a variety of ways. One popular form is the art of domino-toppling. This is performed by placing dominoes on the narrow end, close to each other in a long line. Once erected, the leading domino is flicked, creating what is known as the Domino Effect (This led to the Domino Theory, that one effect sets off a series of similar events) and causing all subsequent dominoes to fall in sequence. Lines may also be turned into waves, or one domino can be used to cause two dominoes to fall, creating a fan effect.

Experienced topplers also use other apparatus such as pulleys, cars, balls, rulers and balloons, among other things, to create different and spectacular effects as detailed below.

This particular event has led to competitions to create the largest number of dominoes to be felled in this manner. There have been many complications, with dominoes accidentally being set in motion during set-up. This is generally prevented by removing key dominoes, known as blockers, as a safety mechanism until all dominoes are in place. Other problems have been vibration. This has caused problems in one of the most competitive Countries, Japan, due to earth tremors. Special stabilised floors are used to counteract this.

Possibly the most famous accident was in Leeuwarden on Friday, 11 November, 2005, where the Television Company, Endemol (Creator of Big Brother), was attempting to break the world record. A system of 750 safety gaps had been built into the set-up, using Breaker Dominoes, but a common house sparrow had managed to get into the building, and succeeded in knocking down 23,000 dominoes. The errant bird, evading capture, was subsequently shot by a marksman, causing outrage among animal lovers.

Dominoes used in these events are often coloured, so that a pattern, story or theme can be created, and are often televised. A couple of programs that have shown them regularly are Blue Peter and Newsround, produced by the BBC, in the United Kingdom.

However the dominoes are not necessarily laid solely on the floor. Many set-ups incorporate ramps, wheeled dominoes, flying dominoes... essentially anything which will cause a domino to reach another domino, and set the whole lot toppling. Fan sequences are regularly used, as are swirls, but the most exciting may possibly be two lines of dominoes falling in opposite directions. In 1974, the World Record, as recognised by the Guinness Book Of Records, was 11,111 dominoes, set by Bob Speca in the USA, reaching 255,389 in Japan in 1980. The first 1,000,000 record was set on Saturday, 2 January, 1988, in a now Annual Showcase by the Weijers Domino Productions, Netherlands, at 1,382,101. The record, set by the same group, was set at 4,079,381, on Friday, 17 November, 2006. The largest attempt by a single creator is 303,621 by Ma Li Huah in Singapore on Saturday, 16 August, 2003.

1When this researcher played regularly, the chosen value was an English halfpenny per pip.