Card Games Content from the guide to life, the universe and everything 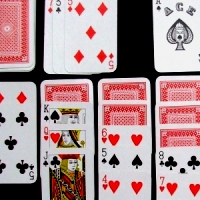 Where playing cards originated from is unknown, but they've certainly been around since the 14th Century. It has been speculated that cards have evolved from Tarot (which use the suits cups, swords, money and clubs), or that there's a connection with Hindu statues (which traditionally hold a cup, sword, ring and baton).

Speculation aside, the standard deck of cards that we are familiar with today, has evolved over the ages. Until Victorian times there were no Aces, but instead, for each of the suits, there was a card with just the number '1' on it. Interestingly, in the 18th Century, the Ace of spades bore a mark on it from to prove a levy on the pack had been paid to the government. (If your pack didn't have the mark on it, the punishment was hanging.)

Whatever the card design, cards have always been used been used for conjuring, divination and, of course, for entertainment. Over the centuries, certain conventions have emerged, which are covered here.

A Deck of Cards

A deck of playing cards consists of 52 cards, divided into the fours suits of hearts, diamonds, clubs and spades. Each suit contains cards numbered two to 10, the three picture cards (also known as 'court or 'face' cards) Jack, King and Queen, and an Ace card, which either represents 1 (when 'Aces are low') or the highest value card (when 'Aces are high')

In general, dealing tends to go around the table clockwise and starts with the person left of the dealer. Each player gets one card before going onto the next, and the dealing goes around the table until everyone has however many cards they are supposed to have. To avoid cheating the cards are dealt from the top of a face down deck.

For some games more than one card has to be dealt per go around the table. This can work by simply giving each player a higher number of cards each go, for example a packet of three cards. In some games though it actually varies due to what time of going around the table it is, eg 1st time, 2nd time. Any variations like this are usually covered in the rules of the game.

The widow is an extra batch of cards dealt to each player.

In certain games, the remains of the pack after the hands have been dealt but which the players have access to in the course of the game.

These are generally the collection of cards played in a round and representing victory in that round's play. Also to play a trick is another way to say to play a round. Now we will look at how to play and win tricks.

To start with a person 'takes the lead' and places a card, then each player follows their lead going clockwise around the table. The lead taker in the first trick is the person left of the dealer and for tricks after that the person who won the last trick.

The lead card defines the suit for that trick, now you can either follow suit, trump, or effectively throw your card down the drain as only the first two count for anything. However there can be penalties for wasting a card, these would be covered in the rules.

Some very basic rules of thumb regarding play:

When certain cards or a suit of cards is selected to be better than the rest they are called trumps. When using suits as trumps the cards in that suit are worth more than the cards of the other suits irrespective of rank. But within the trump suit ranking remains. Put simply the two of trumps can beat any card from any other suit, and the King (when Aces are low) or Ace (when Aces are high) of trumps is the most powerful card and so beats anything else.

When certain cards are used rather than a suit the details of how that will work will be dealt with in the description of the game.

There can be many different ways to choose trumps, but these three are most popular:

Choice of Partners for Partnership Games

This is usually done by drawing cards at random from the deck, the pair with the highest ranking cards form one partnership and the other two players the second.

Choice of the Initial Dealer

There are two main ways to choose the first dealer is chosen.

If through an error a game goes to pot the rules on what to do tend to vary from game to game, but here are some general guides.

A misdeal should be declared if during the deal a card in the deck is found face up, or if the rules of shuffling or dealing are broken.

If you have an imperfect deck wth duplicate, missing, and/or extra cards get a new deck or just forget it.