Poker - The Card Game Content from the guide to life, the universe and everything 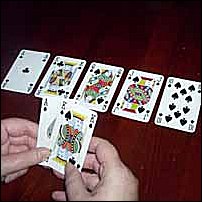 Poker is a card game that will forever be associated with hard-faced gamblers in the Old Wild West or in some gangster's speakeasy. It's a game of chance and skill that requires an exceptional amount of nerve, and a memory like an elephant for all the different terms and variations. This entry will introduce you to the game of Poker to you with a number of the terms and variations. However it won't tell you how to deal with a shootout if your caught cheating.

In this section we will look at the essential aspects of playing a game of poker, and we will cover where the game changes for the variations.

Banker - The banker is not really a banker, but more of a supervisor managing the stock of chips, the chips given to each player (including themself, if playing), and generally oversees play to make sure there is no cheating. A player may buy chips from the stock via the banker, and may sell excess chips back to the stock.

The Dealer - This job seems fairly self explanatory, and it is, except in the case of 'dealer's choice' rounds. In dealer's choice rounds, by agreement from all the players the dealer can set:

But the dealer cannot:

The Pot - This is the area in the centre of the table of play where bets (in the form of chips) are placed. It is located in plain sight of all players to discourage cheating and perception of cheating.

The Kitty - This is basically an amount of money set aside for drinks and new decks of cards (if it is a very long game). The money for the kitty is usually taken from any pot where there has been more than one raise, the amount taken is usually one betting unit, but the details are set by an agreement with all the players overseen by the banker at the start of the game.

The end time for the game should be clearly agreed before the start of play to avoid arguments and games going on so long it effectively means the players have permanently changed address.

One of the least well known rules is the decision making time limit, which is five minutes. If you fail to act in that time your hand is considered dead.

The following should be agreed on before play:

Play goes around clockwise, and follows the following pattern:

Remember this game developed into its present form in the Wild West, you and your fellow card slingers have to outplay, bluff and bet your way to the showdown when we see how strong your nerve or your hand is. But there are a few rules to remember. What follows is a list of rules that, if in the old west and you didn't follow them, it would mean you'd be shot or hung from the nearest high object:

Now this is one of the fun points of poker, you can say what you like about your hand true or not, play wrong reactions, give false impressions, discuss false strategies, heckle, be sarcastic, make up a short piece of music for banjo, praising or condemning the virtues of your hand, or buy a round to show your confidence at winning. The only thing that is inadvisable is to either always lie or always tell the truth as your cover will soon be blown and you will be left without a pot to micturate in. Also help is not allowed!

This is a list of possible hands starting with the best possible hand right the way down to the lowest value hand.

What is a wild card? Well there are two possibilities:

In either case it has to be agreed upon before you start and the value you give your wild card means it effectively becomes that card without any differences.

It's important to remember that there is no difference between a wild card playing, for example, the four of hearts and the real four of hearts.

Well first let's look at when to bet, betting intervals tend to vary between the variations you play, but there is at least one betting interval (obviously) but in most games there tends to be two or more. Now after one of the players opens the betting each player has to 'fold', 'see' the bet or 'raise' the bet (remember you have to announce exactly what you are doing before you do it).

Fold - means 'I'm out of here, gone, too rich for me' etc. This ends any active role in the hand.

See the bet - to put up an equal amount to the last amount bet.

Raise the bet - to put up more than the previous bet.

This is allowed in several types of poker, what happens is on the first round of betting you are allowed to check, which means you don't bet but stay in. Now if everyone checks the hand is over as there isn't much point playing without anything to win, but if even one person bets, we go onto the second round of betting where no one is allowed to check. Remember checking is only allowed in betting round one.

When Does this Betting Madness End?

Sandbagging is when a player checks to hide a good hand, or when two or more players keep raising the bet to force each other out of the game.

Freezing the Raise if two or more players are spending ages just raising and raising the bet. Freezing the bet comes in to play to stop everyone else falling into a coma before expiring from boredom. This happens when if after two or more raises any player who hasn't raised in this betting round says 'freeze the raise' or when one player on top of betting enough to stay in bets a previously agreed amount over the odds, usually two to five times the maximum bet, then the remaining players must drop out or equal the bet to stay in. Freezing the bet only lasts for one betting round.

A limit on raises is a better method of control and is agreed on beforehand. For example, a maximum of three raises by one player or in total by all players.

Bonuses are an optional idea where amounts are agreed for all players to pay for certain hands, for example 'Royal Flush'.

The Difference Between Closed (Draw) Poker, and Open (Stud) Poker

Now there is several important reasons for explaining this distinction, as the different forms are suited to different circumstances. The two types are as follows: