Cribbage - the Card Game Content from the guide to life, the universe and everything 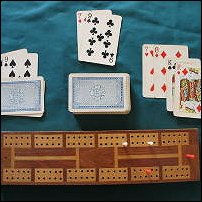 Cribbage is one of the most entertaining two player card games ever created. There are a number of variations, so some of the rules may be different from how other people play. This doesn't make a whole lot of difference really, as long as the rules are consistent.

Every crib board contains four rows of 60 holes (two rows per person), with marker lines every five holes for easy counting. The objective of cribbage is to be the first person to score 120 points.

There are three main parts to the game of cribbage: the deal, point play and hand scoring.

Starting with the non-dealing player, each player puts down a card face up and calls out the total value of all cards played so far. Aces have a value of one and Jacks, Queens and Kings all have a value of ten. A card's suit has absolutely no effect on its value.

The total is not allowed to surpass 31, so when neither player can play a card, the person who played the last card scores one point and the total is reset to zero. Other scoring opportunities are:

Runs can be in any order and with any mix of suits.

Once both players have played out all their cards, they move to the next part of the game.

Starting with the non-dealing player, each player gets a score for their hand. When scoring a hand, the 'starter' card is considered to be a part of the hand being scored. The scoring system is as follows:

Here are a couple of sample hands scored, to more fully explain the scoring system.

After each player has scored their hand, the dealer takes the crib (the four cards that were put aside earlier) and scores that as his/her hand, too. Once the crib has been scored the non-dealer becomes the dealer for the next round and it all begins again. The first player to have a total score greater than 120 wins.

1A crib board is normally used to keep score but can be replaced by almost anything; bottle caps, biscuits, money or whatever else that you would like to use. Crib boards vary in shape and size, but usually have a series of regularly-spaced holes that small pegs are placed in to keep score.