Musical Instruments Content from the guide to life, the universe and everything 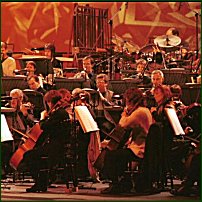 Music is a universal human phenomenon. We make music, we listen to music, we are moved by it. The earliest sort of music was undoubtedly the human voice, but for thousands of years, humankind has also made use of musical instruments. There are hundreds or even thousands of different musical instruments, but they can be classified into different types. This entry attempts to outline the main types of instrument.

The traditional way to divide up instruments, based on the instruments of the orchestra, is as follows:

The Wind category is further subdivided into two sub-categories:

Note that the names 'woodwind' and 'brass' were originally based on the material the instrument was made from, but have changed to mean the manner in which the sound is produced. Some woodwind instruments such as the saxophone are made of brass, while the alphorn, a giant horn made from wood, is technically a brass instrument.

String instruments use a vibrating string to produce a sound. The string may be plucked as in a harp or guitar, or may be stroked with a bow, as in the violin.

The main string instruments in the orchestra are the violin, viola, cello, double bass and harp. In popular music, the most common string instrument is the guitar, with a number of different types (acoustic, classical, electric, bass).

Other string instruments which are common in traditional music in various regions include the banjo, ukulele, mandolin, balalaika, the oud and the zither.

Hundreds of years ago, the viol or viola da gamba, an instrument somewhat akin to a cello with six strings and frets, was popular, and there has been a revival of viols for use when playing Renaissance and Baroque music.

In an orchestra, there are four types of brass instrument: the trumpet, the horn (or French horn), the trombone and the tuba. Brass instruments are very suitable for marching bands because they are portable, waterproof and loud. Military bands include everything from trumpets to sousaphones, but the traditional British brass band consisted of just a few families: cornets, one flugelhorn, trombones, and tenor, baritone and bass saxhorns. Nowadays euphoniums and tubas are added to or substituted for some of the saxhorns.

The prolific instrument maker Adolphe Sax invented a variation on the French horn, which was used by Wagner in his 'Ring' operas. It is now known as the Wagner Tuba.

There are two ways to change the pitch of a note in a brass instrument:

In an orchestra there are four main woodwind instruments, which were all originally made from wood: the flute, the oboe, the clarinet and the bassoon. Orchestras also often feature the cor anglais (known in America as the English horn) which is just a big oboe.

Outside of the orchestra, the most popular woodwind instrument is the saxophone, which features in marching bands, jazz and in rock and pop.

Woodwinds generally change the pitch of the note produced by opening holes along the length of the instrument to effectively shorten the length of the tube. These holes may be normally covered with the fingertips, or with pads controlled by levers known as 'keys'.

The percussion section, being 'anything that you hit', has the biggest range of instruments. Even in the orchestra there are at least twenty different types: drums, including timpani (kettledrums), bass drum and snare drum; cymbals, gong, tubular bells, xylophone, whip, wood block etc. Virtually every rock band in the world has a drum kit, featuring all sorts of different drums and cymbals, and the West Indian steel pan bands all feature percussion instruments. In the Arabic musical world, drums are very common, such as the derbakke or tabla, a narrow-waisted drum.

While the traditional classification system works well for orchestral instruments (because it was designed for them), there are also many unusual instruments such as the Australian Aboriginal bullroarer, the Jaw Harp and even the humble mouth organ1 which don't fit into the categories given above.

A more sophisticated system was developed in the early 20th Century to classify every instrument.

This system divides up instruments as follows:

This system has the advantage of using complicated Latin and Greek names for the categories so it sounds very technical and puts off the ignoramuses. It can be seen, however, that aerophones are just slightly more general wind instruments and chordophones are string instruments, so the only major differences are the division of percussion into drums and others, and the addition of electric instruments.

Of course, that's not all there is to the Hornbostel-Sachs system. There are lots of subcategories, and sub-subcategories. People who study many different musical instruments will use the Hornbostel-Sachs system to exactly characterise the important differences between them: the colour of a guitar is not important, but whether it has nylon strings or metal ones will affect the sound, so it is captured in the classification system. If you really want to exactly categorise an instrument, then this system is your man. But for the rest of us, it can be safely ignored.

One of the problems with all these ways of dividing up instruments is that keyboards are not well represented. Most people would put a piano, a harpsichord, an organ and an electronic synth into one category - they're all played much the same. But the sounds are produced respectively by striking a string, plucking a string, by air in a pipe and by the magic of electronics, so they are classed as Percussion, String, Wind and Electric respectively.

Until someone comes up with a better system, we'll just have to live with that.

1Although the mouth organ uses air to drive a vibrating reed, there is no vibrating column of air. The pitch and tone are determined entirely by the physical characteristics of the reed. This makes it entirely different from woodwind instruments.