Steel Pans - 20th Century Percussion Content from the guide to life, the universe and everything 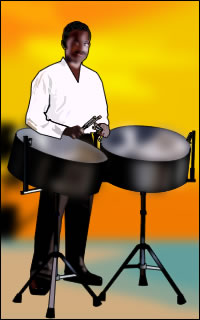 Steel drum [or steel pan] (noun): a musical instrument orig. developed in Trinidad that is played by hammering raised and tuned portions of the bottom of an oil drum1.

Everybody wondering how the steel band start
When you get to know, it will break your heart
I tell you now, it was founded by one Winston Spree
And this is how he started his first melody:
Be do be dom, tom ping, tom ping.
- Lord Kitchener2

In Trinidad in the 1930s, rhythm bands of young men paraded the streets during Carnival and other celebrations pounding hollow bamboo drums and later metal objects like garbage can lids, automobile parts, pots and pans, and biscuit tins. These became known as 'steel bands'.

Legend has it that in 1942 or 1943 Spree lent his large steel drum to a friend and when it was returned it had been beaten into a concave shape and had lost its special tone. It was while he was hammering under the surface of the drum he noticed that pounding created different pitches or notes. He went on to create four distinct notes on his drum. He could now play melody rather than percussion and the steel pan was born.

There is no disputing that Spree was one of the early pioneers of the melodic steel drum. In 1946 he went on to develop the 14-note pan using old oil drums; prior to this the drums being used were made from biscuit tins. Ellie Mannette (a friend of Spree's) used discarded 55-gallon oil drums4 with a combination of heating, trimming and hammering to perfect a drum which could play two octaves of a diatonic scale. Pans capable of chromatic scales and low-tone bass pans were later developed.

In 1951, a ten-player band calling themselves the Trinidad All Percussion Steel Orchestra (TAPSO), which included Simon and Mannette as members, represented Trinidad at the Festival of London. They played both Caribbean and classical music. The steel pan was introduced to the world! The band went on to tour through England and France and performed on BBC Radio and Television.

Pans usually start life as either 45- or 55-gallon oil drums, although some can be purpose-made. The pan-smith5 uses a large hammer to drop the flat end of the drum into a deep dish shape. The depth the drum is sunk to depends on the instrument required. Basses are relatively shallow whilst the tenor pan is deeply dished giving a shrill sound. Great care has to be taken to ensure the thin steel isn't split during this sinking process.

Templates are then used to mark out the different notes - the shapes and sizes are critical when trying to obtain a perfect note. Then the edges of the notes are scored using a punch to define the border between the vibrating note and the non-vibrating metal surrounding it. Each section/note is then hammered upwards from below.

The drums are heated and then cooled to temper the steel. Each note is then tuned to the desired note by tapping each section with a rounded hammer. This can take tremendous patience at times. It should be noted that during a pan's life-time it undergoes a lot of stress from playing and like most instruments will require occasional fine tuning. On the steel pan this process is known as 'blending'. On average, a steel pan will need to be blended twice a year, depending on how often and how hard it is played.

Today's steel bands can consist of as little as four pans or many as 300 instruments. The larger groups are often referred to as steel orchestras. The pans have varying pitches from the tenor (or tune) pan which plays the high notes and leads the melody down to the bass which can consist of as many nine drums with three notes per drum. Names are given to the different pans to indicate the range they play.

Steel bands play a wide variety of music - from calypso to classical. The music can consist of elaborate arrangements and bands often compete against each other in competitions6. Players tend to memorise their parts for these arrangements since most cannot read music, not even the arranger. So the playing and arranging is done 'by ear'. This is an incredible feat given the complex nature of some pieces - Rossini's 'William Tell Overture', for instance.

At the time of writing, steel pans range in price from approximately £350 for a painted tenor pan to £850+ for a chrome-finished bass instrument. Some players (mainly melody players) within a steel band will own their own instruments but most of the larger (and more expensive) instruments will belong to the band. Large bands tend to have corporate sponsorship to help offset the high costs.

So from humble beginnings, the steel pan was born. Now there are more than one thousand steel bands in dozens of countries including the USA (240), the United Kingdom (300), Switzerland (130) and of course Trinidad (190). Steel orchestras have played such prestigious venues as London's Royal Albert Hall and New York's Carnegie Hall. It was the only new percussion (possibly the only acoustic) instrument invented in the 20th Century.

1Definition from Merriam-Webster's Online Dictionary.2Calypsonian Lord Kitchener was a prolific writer of steel band music; the quote was taken from his 1975 Tribute to Spree Simon.3This has been strongly disputed recently with evidence being brought forward to suggest that the instrument was developed as early as the 1930s by Andrew 'Pan' De La Bastide and others.4Trinidad is an oil producer and exporter so oil barrels are readily available.5A skilled craftsman who makes and tunes steel pans.6Often as part of carnival celebrations like the Notting Hill Carnival and Trinidad and Tobago Carnival.