Balalaikas Content from the guide to life, the universe and everything 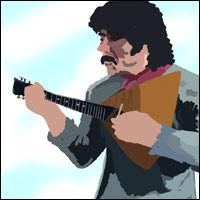 Show me round your snow-peaked mountains way down south
Take me to your daddy's farm
Let me hear your balalaikas ringing out
Come and keep your comrade warm
- 'Back in the USSR', The Beatles

The balalaika is a stringed instrument of Russian origin, fulfilling a similar role in folk music to that of the mandolin, bouzouki or lute.

The balalaika is thought to have developed from early stringed instruments used in Central Asia, such as the Turkish saz or the Persian setar. The first written mention of the balalaika as a distinct instrument is in a 17th-Century document, recording that two men were arrested and punished for playing the instrument in public. Such practices were common in Russia at that time, particularly as the Tsar, acting under orders from the church, had instituted a policy of flogging and exile for anyone caught playing any musical instrument. These laws were gradually relaxed towards the end of the 17th Century, and the balalaika enjoyed a period of popularity as the instrument of choice both for peasants and for court musicians. In the 19th Century, however, the balalaika dropped out of fashion, replaced by the newly developed harmonica among rich and poor alike. The balalaika, while not dying out completely, did become limited to the folk music only of the very poorest of peasants.

It was while it was being played by one such peasant that the distinctive sound of the balalaika was overheard by wealthy landowner Vassily Vassilievich Andreyev. Andreyev took the decision to develop the balalaika as an orchestral instrument, with standardisation of the design and tuning. He created a 'family' of balalaikas of different sizes and ranges, much like the modern violin family1, and re-popularised other traditional Russian instruments, such as the domra, another guitar-like instrument that probably had similar origins to the balalaika. Andreyev also learned to play the instrument and, in 1886, started to give public performances.

As a result of Andreyev's efforts, the popularity of the balalaika soared, and a number of orchestras were formed across Russia. The idea of an orchestra formed entirely of traditional Russian instruments was popular with Russia's last royal family, the Romanovs, and later with the Soviet authorities.

The modern balalaika, as developed by Andreyev, comes in seven different sizes. In order of increasing size, and decreasing pitch, they are:

Of these, the prima is the most common solo instrument, while the piccolo and subcontrabass are less frequently played than the other members of the family.

Similar in construction to a guitar, the balalaika has a unique triangular shape. The size of the instrument varies from the mandolin-sized piccolo to the enormous contrabass and subcontrabass, which have a leg drilled into one corner, allowing the instrument to be supported.

Although early balalaikas had varying numbers of strings, the modern Andreyev instrument has three. In the case of the prima, secunda and alto, the bottom2 two strings are tuned to the same note, with the top string a fourth3 higher. The remaining instruments of the family have three differently-tuned strings, each a fourth apart.

Balalaika orchestras remain popular across Russia, with most major towns and cities having their own orchestra, such as the one that bears Andreyev's name: The Andreyev Orchestra of St Petersburg. Over the years, many balalaika players have emigrated from Russia, taking their instruments and their music with them. As a result, orchestras can now be found as far afield as the USA and Australia. No doubt Vassily Vassilievich would be amazed at what he started the day he first borrowed a balalaika from a peasant strumming the songs of his ancestors in a quiet corner of a Russian field.

1The violin, viola, cello and double bass.2The lowest in pitch.3The interval between the first and fourth notes of a scale.