String Quartets Content from the guide to life, the universe and everything 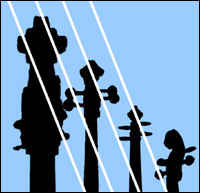 The popularity of string quartets is based on their unique combination of versatility and fullness. The quartet combines almost all of the ranges available to the full orchestra — many pieces of music arranged for the string orchestra can easily be played by a quartet with very little change. The quartet, though, allows players to play more freely and independently of each other. Each player in the quartet is effectively a soloist in their instrument. Thus, faster and more complex music can be played because the player does not need to keep in time with other members of an orchestra playing the same part as him. The player only has to worry about staying in rhythm with the other parts in the group.

Though, as was stated above, the string quartet can include any combination of four stringed instruments, the standard combination (two violins, viola and cello) will be discussed here in detail.

In traditional string quartet music, the first violin very often has the sole melody out of all four instruments. Just as in the full string orchestra, the first violin plays the highest notes and has the most fast passages and difficult bits. Though the melody is sometimes taken over by the cello, the first violin retains it for the most part and thus is usually the leader of the quartet, signalling the beginning and ending of the piece of music and any changes of speed. Since they are so often asked to take the leading role in an ensemble, first violinists are jokingly renowned among musicians for their pompous attitudes.

Traditionally, the second violin's part consists of supporting the first violin's melodies with harmonies, counter-melodies1 and rhythm sections, usually played at the lower range of the instrument. This musician may not be as proficient as the first violinist2.

The violists, due to their boring and simplistic parts, are usually the butt of the rest of the group's jokes. In early chamber music ensembles of the Baroque and Classical eras3, the viola part was given to those musicians who were not proficient enough to play the violin parts. However, this is not the case today, and the viola part in a string quartet is considered by many to be quite a good gig to snag — despite the boredom caused by the repetitive nature of the parts.

Playing in the lowest tonal range of the standard quartet, the cello generally has the second-most-interesting part in the ensemble. Due to the complete opposite characteristics between the violin and cello, the cellist's part often complements that of the first violin, doubling the melody or playing counter-melodies. Though in early chamber music (such as quartets) the cello was not given as prominent a role, playing primarily rhythm, more recent music (from the 19th Century onwards) has made use of the cello's beautiful sound to create some nice combinations with the rest of the ensemble.

The History of the String Quartet

It is possible that the very first quartets came from composers who had written music in Germany and Austria during the early 1600s. These composers wrote music evenly and thematically balanced between two violins, a viola and a cello or bass. This early form of quartet music generally consisted of folk song adaptations. Around 1620, however, the viola dropped out and a keyboard instrument such as a harpsichord was added as accompaniment. This arrangement of players and the music that they play is known as the 'trio sonata'. The trio sonata quickly became the popular musical format of the time.

Haydn has been regarded as the 'Father of the String Quartet' by almost everyone, with the exception of himself. Haydn was staying at Weinzierl at the invitation of the Baron von Fürnberg when he started playing in a string quartet with Fürnberg's steward, the village priest and a musician by the name of Albrechtsberger. It is very likely that this is the group for which Haydn wrote Opus 1, Numbers 1-6, his first string quartets.

From that point until somewhere between 1775 - 1800, Haydn was the driving force behind the string quartet. He wrote a total of 68 quartets, in addition to a longer series of quartets called The Seven Last Words of Christ on the Cross. Soon after Haydn began writing quartets, he was joined by other learned composers such as Mozart, who later had a profound impact on the styles and traditions of the string quartet.

Mozart met Haydn in Vienna during the 1780s, and was so impressed by his work with small ensembles that he was inspired to write several quartets himself. Mozart wrote 23 quartets in all, including the Vienna and Haydn series, both written in honour of his mentor.

In the late 1780s and early 1790s, Haydn served as Beethoven's teacher. This undoubtedly had a profound impact on Beethoven's composing, but it should be noted that Beethoven did not begin composing his quartets until 1798, when he composed the first (chronological) string quartet piece, Opus 18 Number 3 in D Major. This was one of his first six quartet pieces. He later went on to compose a total of 16 quartets, regarded by musicians and music experts as some of the finest quartets by any composer.

Schubert was the natural 'next step' in the progression of quartet composers, as he was taught by Salieri, Mozart's famous rival. He studied at some of the best music schools available to him, and under the tutelage of his father and his mentors (and later independently) he wrote 15 string quartets — among which Death and the Maiden and Rosamunde are perhaps the most famous.

Mendelssohn, building on the work of Mozart and Beethoven, wrote his first string quartet (a set of 15 fugues, Opus 18) at the tender age of 12. He later went on to write eight more quartets, all of which were composed in his late teens and early twenties. He founded his style largely on that of Beethoven, though expanding on it in the Romantic fashion.

Dvorak was Czech in origin, but moved to the United States to direct the National Conservatory. While in his tenure there, he wrote several quartets, among which is the American quartet — inspired, like some of his other works, by the 'New World' in which he spent a significant portion of his life. He later went back to Czechoslovakia and continued composing, turning out a total of 14 quartets by the end of his life.

Tchaikovsky only composed three string quartets: Opus 11 in D major, Opus 22 in F major and Opus 30 in e flat minor. However, he has become famous for his ballets, symphonies and other works of chamber music. In any case, the second movement of the first quartet has become a classical music 'hit' and has been recorded by several prominent ensembles.

An incredible child prodigy, Shostakovich survived the Soviet Union's Great Terror of 1936 to create a total of 15 string quartets. These were not widely recognised by the public until the last fifteen years - since then they've been recorded by various notable groups, including the Borodin and St Petersburg quartets. Many people now consider Shostakovich's quartets to be on par with those of Haydn, Mozart and Beethoven.

Modern ensembles continue to perform these works of many years ago, as well as pieces by contemporary composers. Some of them are independent ensembles, whilst others are affiliated with music schools and conservatories such as the Julliard School in New York. However, all contain truly talented musicians. You don't have to be a great star to play in a string quartet; many state schools and public chamber music workshops all over the world have fielded commendable quartets. You don't even have to play classical music: quartets that play everything from klezmer to cajun can easily be found — depending, of course, on which area of the world you live in. Some quartets have even arranged the music of contemporary rock groups such as Rush and Pink Floyd, which can provide an 'interesting' sound. However, the fact remains that quartets, perhaps through their functionality, musical perfection or just all-around good qualities, remain one of the most popular forms of chamber music.

1A counter-melody is a seemingly melodic line, but plays notes that fill out the chords and provide support to the true melody. A harmony is a part using slower notes that is (at least to the musician) not nearly as interesting.2Though, of course, top-calibre quartets always consist entirely of top-calibre musicians. It is only at the dubious school level that the second violinist is actually a poor-quality musician.3In the mid-17th to early-19th Centuries.