Guy's Tower, Warwick Castle, Warwickshire, UK Content from the guide to life, the universe and everything 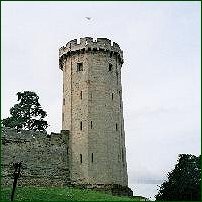 At the town of Warwick, nestled on the River Avon, is a quite remarkable castle. The seat of the Earls of Warwick since 1088, it is an impressive structure, both visually and historically. The brainchild of William the Conqueror, he ordered its construction in 1068, shortly after nicking England from Harold Godwinson at the Battle of Hastings.

Warwick Castle was built slowly over the centuries, with bits and pieces added on every few years or so: particularly towers that were important in protecting the interior. Towers, being tall, projected above and out from defensive walls, allowing defenders (mostly archers) a clear view downwards and sideways, so they could pick off approaching enemies. Or just jeer at them.

One such tower was erected at Warwick Castle during the 14th Century - Guy's Tower.

Towering Above the Rest

Guy's Tower stands on the east corner of the castle as you face its gates. An imposing structure, it rises some 148 feet (39m) with five storeys, an unusual twelve-sided defensive construction, and what is known as a machicolated crown (this just means that around the parapet are holes for defenders to drop stones or boiling oil or anything they like on would-be attackers).

The first four storeys of Guy's Tower consist of a central stone-vaulted chamber with two small side rooms – one a gardrobe (toilet), the other most likely a bedchamber. This can be assumed as there is evidence that it was used as living quarters, with floor tiles that show many heraldic patterns that can be identified with the Earls of Warwick.

The fifth storey is a hexagonal guardroom and ammunition store, due to the ease of access to the nearby battlements. In August of 1642, during the English Civil War, Sir Edward Peyto ordered the windows in the guardroom to be widened so that small hand-held cannons could be fired by soldiers from within the tower. This came in handy when the castle occupants had to defend it from Royalist troops.

The top of Guy's Tower, apart from being a really good place to stick a flag, gives defenders a 360-degree view of the castle and its grounds, and is the highest vantage point.

Guy's Tower takes its name from the 10th Earl of Warwick, Guy de Beauchamp. Born in 1272 at Elmley Castle in Worcestershire, Guy was the son of William de Beauchamp and Maud Fitzjohn. William was a celebrated military commander who served King Edward I, and it seemed that his son was to follow in his footsteps. When his father died in 1298, Guy became the Earl of Warwick and was a notable member of the king's forces at the Battle of Falkirk. Guy was a strong leader in combat, with tales of a fight with a knight called Coebrand (by all accounts a giant who could never be slain) becoming local legend.

He also had his fair share of wives. His first marriage was to Isabella de Clare in 1297, but they divorced. He then married Alice Flamstead, but this did not last either. On 12 February, 1309 he married Scottish heiress Alice de Teoni, who bore him heirs of his own. Guy was also quite a political force, and with a group of friends formed a collective known as the Ordainers. This 14th-Century gang of earls used their power and influence to try and gain some control over how King Edward II ruled the country when he came to power in 1307.

Edward II was seen as a weak and useless king, all the more so for the rumours of his affair with another man, Piers Gaveston. A Gascon knight, the first Earl of Cornwall and something of a smarmy git, Gaveston was the 'favourite' at court. When Edward was still the Prince Regent, his friend Gaveston found it funny to give the other earls nicknames. Some of them received monikers such as 'Whoreson', while Guy de Beauchamp was teased for his dark complexion, becoming 'The Black Dog of Arden'. Edward took great delight in Gaveston's wit and the ridicule of the other men at court, so much so that in 1308 when the new king left for France to marry Isabella, the daughter of King Philip IV of France and Queen Jeanne of Navarre1, he left Gaveston in charge.

This didn't go down too well with the Ordainers (especially Thomas Plantagenet, the 2nd Earl of Lancaster), and when the newly-married Edward returned from France, rumour of an unsanctimonious relationship between Piers and Edward flourished. Especially after Gaveston took to wearing royal purple robes, hung off the king's arm at the coronation and slept in his chambers that very night! For this, Gaveston was banished from court, apparently leaving Edward unconsolable.

In 1312, Gaveston attempted to return to Edward's side, having been promised his life would be safe. However, the Ordainers got a hold of him first, and Guy supposedly barked at the wayward man:

The Black Dog of Arden is come to keep his oath which he was sworn, that you should one day feel his teeth.

Under the impression that Gaveston had broken the agreement of his banishment, Thomas Plantagenet, along with Guy, made the exile their prisoner and took him to Warwick Castle on the 10 June, 1312. Here, in the Great Hall, a rather quick trial by Gaveston's peers (the Ordainers) was undertaken. Death was the sentence, and on the 19 June the knight of Gascon was promptly marched, kicking and screaming, to Blacklow Hill where he was beheaded. On hearing the news, Edward was again unconsolable, crying into his sleeves.

Guy was later pardoned in 1313 for his part in capturing Gaveston, but the damage was done. His relationship with the king was a tense one, and he also later refused to take part in the Scottish military campaigns of 1314, perhaps in consideration for his wife and respecting her heritage. On 12 August, 1315 he suddenly died. There were rumours of him being poisoned, but at the age of 43 he had fared quite well, surviving a few battles, a few wives and no doubt other countless attempts on his life over the years.

It was Guy's son Thomas (a Knight of the Garter, veteran of the battles of Crecy and Poitiers, and military advisor to Edward - the Prince of Wales) who would go on to oversee the reconstruction of Warwick Castle, and Guy's Tower, in 1345. But he died before it was finished, so his son, Thomas, ensured that the tower honouring his ancestor was completed in 1395.

Warwick Castle was sold to the Tussaud's Group in November 1978, and since then the entire site has undergone a wealth of restoration work. That wealth amounts to about £20million. Of this, £190,000 was spent on Guy's Tower from November, 1996 through to June, 1997, replacing the roof and north wall (not to mention the flag that flies atop it).

It is possible to access Guy's Tower on a visit to Warwick Castle. Remember though, to afford to pay for all the restoration work, the entrance fee is a bit steep. But, dependent on the time of year and what activities are being organised, it is well worth it. There are all manner of things to see and do, such as try on period costumes, visit the dungeon and 'Ghost' Tower or watch jousting, archery, falconry or even a trebuchet in action.

Anyway, back to Guy's Tower. If you want to climb up the tower you can do so by taking the steps up the east curtain wall and entering from there. Be warned though, the spiralling climb up the five storeys is not for the faint of heart2. It's dark, cramped, steep, and a bloody long way to the top. Especially if you have to carry a small child - as this Researcher did. However, it does add to the ambience, carefully stepping your way through the murk, following the footsteps of past residents of the castle.

If you get claustrophobic and need some air, you can exit halfway up onto the north-facing curtain wall. Bear in mind though, if you don't exit here, you are obliged to climb to the top. While there are two staircases in the tower - one is used for 'up' traffic, the other for 'down' traffic - you can't turn around and go back down the way you came up, due to the one-way system in operation! However, if you climb the full way to the summit, after lying down for a few minutes to catch your breath, you are rewarded with views of the surrounding Warwickshire countryside that will take your breath way.

1Who earned the nickname The She-wolf of France.2Or for those that suffer from chronic asthma.