The Ballista and Trebuchet - Antique Catapults Content from the guide to life, the universe and everything 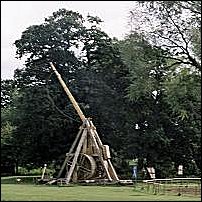 Catapults are pretty amazing pieces of machinery. They can fling large objects over great distances and cause a considerable amount of damage. Or you can make a hand-held one with a bit of elastic and a forked stick, which will enable you to shoot pebbles at the window of your object of desire/hate in the middle of the night. But where did the idea originate?

Most schools of thought say it was the Ancient Greeks who came up with the weapon, because they loved fighting, and finding wondrous new ways of killing each other. This Entry won't discuss the Greeks however; it will merely concentrate on two specific styles of antique catapult - the Roman ballista and the Medieval trebuchet.

The Romans reputedly stole the concept of the catapult from the Greeks, but went on to perfect the machine as their own weapon of mass destruction. Ballistae were torsion-powered catapults, using pairs of rope springs to propel missiles, and as such had two horizontal arms, rather like a crossbow. The smallest type, called 'catapulta' or 'scorpio', shot a bolt or arrow, and were used as anti-personnel weapons. Each legion of the Roman Army had at least one small 'catapulta' to each century (100 men), and one ballista to each cohort (300-600 men). The larger ballistae were used to great effect in sieges, able to fire large rocks and spears from a range of 900-1200 feet (275-365m) at defending walls, doing considerable damage. Josephus Flavius recalls of the siege of Jotapata (now Yodfat) in 67 AD:

One of the men standing by a wall, his head was carried away by such a stone, and his skull was flung as far as three furlongs. In the day time also, a woman with child had her belly so violently struck, as she was just come out of her house, that the infant was carried to the distance of half a furlong, so great was the force of that engine.

All varieties of ballistae were highly accurate as well, and there were reports of the operators being able to target single men or objectives. In 43 AD, a local defender of the Iron Age hill fort Maiden Castle was apparently the victim of a Roman iron arrowhead fired from a ballista, the dart found embedded in his bones during an excavation of the site. The remains can be seen at the Dorset County Museum, and are enough to send a shiver up the spine. In some sieges the ballistae projectiles could quite easily be seen by defenders though, and they would hide out of sight when a barrage was noticed. The Romans quickly remedied this by painting their missiles a darker colour, so they couldn't be seen as clearly against the background of the sky! Clever lot, those Romans.

The early ballistae were made of wood, and held together with iron plates around the frames and iron nails in the stand. The main stand had a slider on the top, into which were loaded the missiles. Attached to this, at the back, were a pair of winches and a claw, used to ratchet the bowstring back to the armed firing position. The slider passed through the frames of the weapon in which were located the rope springs (usually made from animal sinew). These were twisted around the bow arms, which in turn were attached to the bowstring. Drawing the bowstring back with the winches twisted the already taut springs, storing enough energy to fire the projectiles.

Ballistae and their like were introduced as a form of mobile artillery to the Roman Army by Julius Caesar, and used on his various campaigns to take over Gaul and Britain, and anywhere else that took his fancy. They became a mainstay of the Roman legions right up until the fall of Rome, and as such left a mark on ancient warfare - and numerous walls and bodies of Roman enemies. Proof of its use by the Roman military can be seen on Trajan's Column, which has carved reliefs of many Roman army ways of war. The ballista was a weapon that went on to be tweaked and redesigned over the ages, the medieval trebuchet becoming the ultimate in similar rock-throwing siege engines.

There's no firm indications to suggest who actually did in fact come up with the idea of this medieval catapult that used a counterweight system to hurl missiles at enemy soldiers or castles. Some evidence implies that it may have been the Chinese in the 5th Century, while it could also have been the Norse 'Vikings'. The word 'trebuchet' itself translates from the Old French - 'to throw over', and that's precisely what these siege engines did.

Trebuchets were commonly constructed at the site of a siege, and made from two giant wooden A-frames (about four metres high, some can be about four stories high) put parallel together, and then set on a large solid timber ground plate. This ground plate was as long as the trebuchet was high, thus preventing the weapon from crashing to the ground when fired. There were plans by some military commanders to add wheels so they could be wheeled into battle, but due to the logistics the idea was quickly laid to rest.

Fitted with a long throwing arm suspended from a pivot at the top of the A frame, the arm was positioned so the top two thirds (the firing end) was above the pivot point. The thicker bottom third was below the pivot point and carried the counterweight. At the longer end of this throwing arm was a long piece of rope. One end of the rope was attached to the arm, while the other end was just looped round a small hook on the arm - so it came off at the end of the throwing swing. The rope had a net, or sling, attached to it - which held a missile. When the trebuchet was fired, the arm flew up, the rope came off the hook and the missile was thrown at about the time when the arm was vertical. At the other end of the arm was a counterweight, and this is what made the arm fly up (like a see-saw).

Some counterweights were fixed firmly to the arm, but many were attached so it could swing, normally a large box filled with stone or sand that could weigh up to five tonnes. This made the trebuchet fire a heavy missile further, and the range of the machine could be anything from 600 feet (180m) to as far as 980 feet (300m). Early forms of trebuchet, sometimes referred to as 'mangonels' or 'petraries', were small portable anti-personnel weapons. Fired by two men pulling on ropes and people-powered, the operators could inflict some damage, but the drawback was that they more often than not got picked off by enemy archers. The later castle smashing versions relied on the heavy counterweight to propel missiles further and faster, thus could be erected out of range of the enemy.

What missile the trebuchet flung depended on what the attacker wanted to do. Damage was best caused by lobbing big rocks. However, if you wanted to partake in a little biological warfare you could pelt dead animals or dung at your enemy. Some favourites were dead cattle, or even people who had succumbed to various nefarious diseases (including the bubonic plague). Nasty eh?

Another method of attack might be a little chemical warfare; the use of sulphur bags that burst on impact to burn out the eyes and lungs of your intended enemy, or if you had a few horses you could go about collecting their wee and coating sharp rocks with it. A basket full of sharp stones would rain down on the siege defenders, cutting open their skin. The horse urine would then seep into the cuts and scrapes, causing infection and gangrene! Then there was psychological warfare, where the trebuchet could be used to fire back the heads, or entire bodies, of the enemy from whence they'd come. Messengers and white-flag wavers were favourites. When there wasn't a war on (not all that often, granted), trebuchets could also be used to launch flowers at ladies during tournaments. Romantic lot, those medieval chaps.

Respect for the trebuchet as a siege weapon was well documented. At the Siege of Acre in 1191, Richard the Lionheart had two trebuchets made which, in a fit of good humour, he named God's Own Catapult and Bad Neighbour. During a siege of Stirling Castle in 1304, King Edward I ordered the construction of a giant trebuchet, which he named Warwolf. And the besieged knew they were in trouble if they saw a trebuchet being built. If a trebuchet was set up too close to a castle, archers would do their best to pick off the builders or set fire to the trebuchet with fire arrows. Even catapults from within castle walls would be aimed at trebuchets in attempts to destroy them, such was the danger from these terrible machines.

However, as technologies progressed, the trebuchet soon fell out of fashion with warmongers. Not only had castle builders cottoned on to the fact that if you build higher walls and ones that were curved, trebuchet attacks would be deflected better, the introduction of gunpowder meant that the trebuchet was quickly superseded by the more accurate and deadly cannon. The last recorded military use was by the Spaniard Hernán Cortés, at the 1521 siege of the Aztec capital Tenochtitlan. By all accounts he cocked it up royally though, because the first attempt to use the trebuchet against the walls of the city resulted in its self-destruction. Apparently the rock in it simply swung back around and smashed the machine to pieces. Oops.

Missed, but not Forgotten

Today trebuchets are more for show than anything else. The largest in the world can be seen in action at Warwick Castle in England, while many are built for such tournaments as the Punkin Chunk Festival, in York, Pennsylvania. However, the mighty machine has left a lasting impression on not only a few castles in Europe, but the history of warfare in general.