The Curtain Wall: A Castle's First Line Of Defence Content from the guide to life, the universe and everything 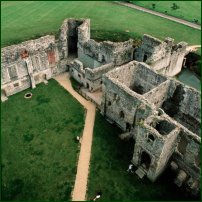 The earliest castles in England were hill forts built upon natural hills or outcrops. A castle would be reinforced with inner wooden ramparts around the flattened summit of the hill it stood upon. Ditches were then cut into the slopes of the hill surrounding the summit, providing the hill fort with a defensive system.

During the Roman occupation, in times of peace, fortifications were normally constructed in stone, but during times of expansion, civil disorder or shortage of funds, wooden fortifications were used. The marching camp was the most common of this type; the Romans built these fortified camps all over the country and there is a rebuilt example at Lunt, near Coventry.

After the Romans left Britain, castle development was slow. In post-conquest England, in order to maintain their hold on the country, the Norman invaders found it necessary to establish a defensive chain of castles as quickly as possible and they introduced a style of castle known as the motte and bailey. These were initially constructed with wooden walls, so not all of these castles survived. The ones that did, however, had their walls rebuilt in stone at some point.

The Stars In The Evolution of the Curtain Wall

The Motte And Bailey

A crucial part of the evolution of the English castle was the motte and bailey, a term used to describe a type of Norman castle built all over England just after the invasion to consolidate the expansion and establish Norman rule. Quick and easy to build1, a central mound or motte was constructed with the soil from the ditch surrounding the site. The bailey was the area at the base of the motte surrounded by a wooden wall and the hill was topped with a wooden tower. These castles developed over time into some of the most important castles in the country. The castles at Warwick, Carisbrooke, Nottingham, Lincoln, Huntingdon, Cambridge and York are examples of castles that developed from an original motte and bailey.

Concentric or multiple castles, which were the pinnacle of curtain wall design, had multiple curtain walls. The best way to describe one of these is a curtain wall within a curtain wall, and one example - the Crusader castle Krak des Chevaliers - is in Syria. Beaumaris is the best English example; work started on a new site in 1295, on the orders of King Edward I, who commissioned James of St George, a castle builder from central Europe, probably Switzerland, to build this, his last and biggest castle, in Wales. It is constructed as a high inner ring-work defended with an outer curtain wall: 35 feet high, ten feet thick and a total of 1,200 feet long.

Elements Of The Original Curtain Wall

Apart from the walls a castle has many parts, and all castles are different. The part all castles do have in common, however, is the outer wall, normally known as the curtain wall. This encircles the castle and provides the first line of defence2. This is where the builder3 puts most of his skill and effort into making the castle hard to attack.

The curtain wall is the castle's main defensive component, and several basic structural elements are necessary, though some others that have been added over the years. There are many early castles that have some or all of the defensive elements of the later castles due to successive updating and rebuilding by later generations4.

The most important thing when establishing battlements was to provide protection for the defenders on the top of the wall.

From the earliest days of castle-building, castles had crenulations (to build a castle you needed the permission of the king or another person licensed by the king to grant a permit known as a Licence to Crenellate). Crenulations are commonly called battlements. These comprised a walkway along the top of the main wall 5, whereas the main wall was reduced in thickness to create a protective wall along the outer edge. This wall has high sections, merlons6, these were to provide cover for the defenders, and low sections, crenels7, to allow the defenders to fire down at the attackers. These made direct assault upon the walls very difficult and dangerous, as any assault made on the walls inflicted heavy losses on the attacking force.

Not to be confused with a tower that was higher than the wall, a bastion was the same height as the wall it was a part of. Used from the Roman era, a bastion is a projection built to cover blind spots and to give the defenders the ability to fire on the attackers from two directions. The bastion was often used as a platform for a mangonel (a kind of catapult) or other defensive equipment.

As effective as the battlements and bastions were, even the best designed castle could have blind spots. These were at the base of the walls. The hoarding was a projecting enclosed timber gallery erected in front of the battlements, which allowed the defenders to see and fire upon the attackers. There were even apertures in the floor to allow them to fire on those beneath them.

In the late Middle Ages, the hoarding evolved into a stone-built structure, the machicolations8, this served the same purpose. This had two advantages, it was impervious to fire and it lasted longer as it did not rot away.

The Curtain Wall and Missiles

The First Stage: The Bow

As missile technology improved, it became advantageous to fire through the walls and from the interior of towers and other structures. The first of these adaptions were arrow loops, or slits. A vertical slit between one and three metres in height and 12 inches wide inside and narrowing to two inches on the outer face.

The Second Stage: The Crossbow

In time, the use of the crossbow became widespread and the vertical slit was given an additional horizontal slit9 to allow for the use of these weapons. Oilets, circular holes10 on the ends of the slits, were developed around this time.

Blackpowder weapons were now starting to become widespread, and from this time the arrow slit was replaced with a gon or gun loop. The first of these were similar to the original arrow loop, with a large circular hole at the bottom. This style, known as a keyhole gun loop, gave way in time to a horizontal gun slit from 1660 onwards.

As the cannon became more effective it changed the design of the castle: the walls became lower and were protected by earth banks which were placed in front of them to deflect the shot. This was a common modification to older castles during the English Civil War to defend them against attack. A good example is to be seen at Carisbrooke Castle on the Isle of Wight. The final stage of this development resulted in the fortifications being set within a hillside or below the level of the surrounding ground. The fortifications around Portsmouth and Gosport in the south of England are perfect examples of this later type.

On outwork protecting the gateway to the castle, the purpose of which was to force the attacking forces to expose themselves to the defenders fire. If an attacker broke in it was difficult to pass through without heavy losses.

A turret on the corner of a tower or on a wall and known as a bartizan. It was used as a sentry lookout and was one of the castle's highest points.

There are no set rules about towers, they can be round, square or even octagonal. The thing about towers is they are higher than the wall and are a multi-floored building. They serve the same purpose as bastions, but provide a higher degree of protection for the defender and provide height to fire down on the attacker. If the wall is taken they also provide a rallying point for any counter attack. The only problem with square towers was they were vulnerable to undermining by besieging forces. The round tower was harder to undermine as the structure was inherently stronger.

Towers, when taken to their extremes, formed the central keep of the Norman castle and the Scottish castles known as Tower Houses common in the Highlands.

1It is recorded that some of these castles were built in just seven days.2Not all castles had a ditch or a moat. It is worth stating the difference between the ditch and moat: water! That's it. A moat without water is a ditch.3Builders were famous men in their day, James of St George and D'Gomme were the best-known.4One of the best examples is Portchester as it has elements from the Romans to the Tudors.5Known as an allure. This walkway is accessed by a stairway of some sort from the inside of the curtain wall.6Of about two metres high and two metres wide.7Of about a metre high, and a metre in width.8Machicolations are now often called murder holes.9It has been noted that up to three horizontal slits can be found at various castles.10The holes made it easier to aim and fire several styles of weapons. Early guns in particular could be aimed at ground closer to the base of the wall.