The River Avon, Warwickshire, UK Content from the guide to life, the universe and everything 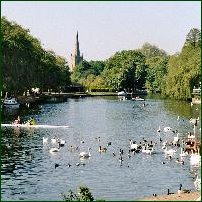 There are many rivers called Avon in Britain, and in fact the world over, but this particular River Avon is a relatively smallish and quiet one that flows for a total of 96 miles (154km) through the counties of Warwickshire and Worcestershire, dissecting the towns and villages of Stanford-on-Avon, Rugby, Newbold-on-Avon, Kenilworth, Leamington Spa, Warwick, Alveston, Stratford-upon-Avon, Welford-on-Avon, Bidford-on-Avon and Evesham, before it joins the River Severn at Tewkesbury in Gloucestershire.

You may have noticed a theme with the names of the towns on the river, and one in particular may ring a bell1. That is Stratford-upon-Avon, the birthplace of one William Shakespeare - thus the river is also known as Shakespeare's Avon or more simply, the 'Stratford Avon'. These other monikers have more than likely stuck because the river's proper name is a bit of a linguistic nightmare. The name Avon derives from the Celtic word for river, which was pronounced ah-von2 - hence the somewhat silly translation of River River...

A River for Boating

Believe me, my young friend, there is nothing - absolutely nothing - half so much worth doing as simply messing about in boats.
- Ratty, from Kenneth Grahame's The Wind in the Willows

Quiet rivers have always attracted boating of some sort. The Avon as a waterway was a trifle difficult to punt up and down, so boating along it was much of a haphazard occupation until navigation works were authorised by Charles I in 1635. The next year, Sir William Sandys (Waterway Engineer & Surveyor) was authorised to make the Avon completely navigable and he began the work of constructing 17 canal locks along the river - sections that could be closed off with specially made gates, so that vessels in transit could pass along the river by raising or lowering the water level of each section. By 1639 boats were able to navigate along the course of the river and in 1641 it was reported that the Avon was navigable to within four miles of Warwick, where the castle overlooks the river.

Later in 1751 and 1793, Navigation Acts were passed by Parliament approving boating along the length of the Avon, with both industry and leisure-time water craft becoming a common sight on the river. However as time went on, and rail and road became the favoured methods of transport, the river and locks fell into disuse. However, in the late 1950s a local campaign entitled simply 'Save the Avon' saw the formation of the Lower Avon Navigation Trust that helped fund the restoration of the locks and canals, and by 1962 boating was restored to Evesham. This spurred on more restoration, in particular that of the Stratford-upon-Avon Canal, which gave the excuse for the reinstatement of the remainder of the Avon's past canals. It was not until 1972 though that a further Navigation Act was passed to allow boats onto the Upper Avon, and the formation of the Upper Avon Navigation Trust ensured that by 1974 navigation into Stratford was fully possible.

Boating-wise, the River Avon is still split between the Upper and Lower Avon Navigation Trusts; the Lower administrating the waterways from Tewkesbury to Evesham, the Upper caring for the canals from Evesham to Stratford. If planning to travel this section of the Avon by boat it is important to remember that most of the locks are manually operated, and that you will need to apply for a boating licence from each authority. And also ensure your boat, barge, raft or other floating debris is no more than 14ft (4.2m) wide and 70ft (21.3m) long, as these are the size restrictions for all vessels navigating the Avon.

In total there is currently about 44 miles (70.8km) of navigable river from Alveston to Tewkesbury and the Severn (where the canals are then managed by British Waterways), and the trip is quite picturesque - particularly in the months of June to August when heavy willow trees dip into the calm waters and many birds and animals can be spotted, including otters if you're lucky! A well-known mooring spot along the canals though is quite probably one of England's most famous towns.

The small town of Stratford-upon-Avon is not only very popular with tourists3, but also the common starting point or destination for many who follow the course of the Avon. Near enough in the centre of the town is the Memorial Park and Royal Shakespeare Theatre, and by the banks of the river here you can hire yourself either a deckchair to sit in the sun or you can go down to the water's edge and for a small fee grab yourself a tiny rowing boat for half an hour, where you can splash about pretending you know how to use the oars.

For a more serene boating experience however, and better for those with young children or elderly relatives, a number of river cruisers operate from the same moorings. Far more comfortable (and less stressful), these 30-minute journeys up and down the river allow you to marvel at some of the riverside homes (and houseboats) or spot the elusive otter or water rat. For those feeling the need for extravagance however, there is The Countess of Evesham, a river boat that can cater for the more epicurean punter.

The Avon at Stratford also sets the scene for a number of boat races, the more adventurous from the typical rowing club ones being the Dragon Boat Races and the Annual Raft Race, both of which raise money for charitable foundations. These are fantastic to watch, and if you fancy, even take part in. Don't be afraid of getting wet though, either if you're in a boat in the race or on the banks spectating!

If this is all too much excitement for you, there are a number of places you can grab some bread (there's a couple of sandwich barges that sell 'subs', 'cobs' and 'sarnies'4) and then wander over the nearby footbridge by the canal lock, or down to the riverside to feed the many swans and other water fowl that congregate - waiting for a careless hand to drop some tasty morsel their way.

If you don't fancy chancing your fingers with the swans and would prefer to get away from the crowds, there are also a few places along the banks of the Avon where fishing is allowed, and a simple line and rod may prove fruitful if you're patient and quiet. Just don't nod off! It's all too easy to do as the gentle wash of the current and the peace and quiet of your surroundings take over...

Go With The Flow

Aside from Stratford, the other Avon towns offer similar experiences. You can quite easily meander along the banks of much of the river, and while there are limited walking trails or cycle routes along it, there are many spots to stop for a picnic, play games or even go for a quick dip. Just remember though if you're travelling through the countryside to follow the unwritten rules - or you may find yourself in all sorts of bother with a local!

Many river towns also have mooring points quite near a pub, so whether you're travelling on foot, bicycle or some sort of floating vessel, you can quite easily stop in for a quick bite and a pint if you are so inclined. The Dirty Duck (or Black Swan) in Stratford is a good example of the kind of atmosphere you can expect. It's popular with all kinds of people, from thespians to bikers and pensioners. Or there's also Cox's Yard, Stratford's only decent place to see live music and comedy. The riverbank courtyard garden area is fantastic on a long summer evening. Because of the relaxed nature of riverside life, most places like the Duck or Cox's are very family friendly too, so don't be afraid to wander into the beer garden with the kids.

The attraction of the Avon more than anything else though is perhaps the surrounding Warwickshire countryside and Cotswolds, green and luscious in the spring and summer - the ideal of picture postcard England;

And there was the vale of Evesham, the whole vale, lying at my feet like a Promised Land - a vast green plain, soft and warmly sunlit, dotted with villages that clustered around square stone towers, flecked with the lighter green where the willows traced the meanderings of the Avon.
- from Harry Hopkins's England is Rich

1Other bell ringers may include Avon ladies.2This gave us both the modern Welsh 'afon', and the Irish 'abhainn' (pronounced ah-vun), and it is also interesting to note that in the Czech Republic the river which flows through Prague is the Vltava, or literally, the 'Wild Avon'.3And for this reason, you might need to dip into your pocket more often than you'd like to pay for things.4Assorted sandwiches and fillings for a price. Sometimes a ridiculously high price, sometimes not.