The Battle of Hastings - 14 October, 1066 Content from the guide to life, the universe and everything 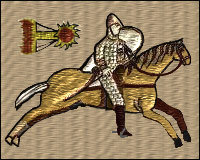 After ruling over England for 24 years, Edward the Confessor, a particularly pious King of England, died without nominating an heir. This created a significant problem, for three men claimed the throne, and only one of them was English.

Born in 1028, William was the illegitimate son of Duke Robert I of Normandy, and Herleve, the daughter of a tanner in Falaise. Known as 'William the Bastard' to his contemporaries, he inherited his father's mantle when just seven years old upon the event of his father's death in 1035. Illegitimacy normally precluded inheritance, but with the support of his great uncle, who was to be Ducal Regent during William's minority, the 15-year old William was knighted by King Henry I of France in 1043. From 1047, William personally dealt rebellions within his own Duchy, especially a number involving his own kinsmen. He also had to protect his lands from neighbouring nobles, including the King of France, who William defeated twice, first in 1054 at the Battle of Mortemer and again in a series of small skirmishes in 1057. By 1066 William was an experienced, competent and feared leader of armies.

William, furious at Harold's failure to uphold his promise, decided to press his claims by force of arms. Having gained papal approval - and marching under the banners of the House of Normandy and The Papacy4 - William embarked for Pevensey with an army of 7,000, including 2,000-3,000 of the giant Destrier cavalry, able to carry men in full chain armour at exceptional speeds. Legend has it that upon arrival, William leapt from his boat, stumbled and slipped onto the beach. The soldiers saw this to be a bad omen, yet William, grabbing a hand of the shingle proclaimed: 'See how I have already taken England, and how quickly England has taken to me!' He quickly established defences in Pevensey and Hastings in the form of a motte and bailey5 at each town.

Where Was Harold During All This?

Harold had had his own problems. King Hardrada had already invaded in the North of England, aided by Harold's brother, Tostig, Earl of Northumbria. Hardrada's army, which has been estimated at about 4,000 men had arrived on some 300 ships. They were defeated by Harold at Stamford Bridge near York, where both Tostig and King Hardrada died. The remnants of that army only needed 25 of the original 300 ships to return home. Harold then marched his army 250 miles South as quickly as possible to defend against William.

The Battle of Senlac Hill

The only proper road, and certainly the only one usable for invasion from the South East Coast to London, passed through the area known as Senlac. If Harold could hold it against William, then William would be trapped on the South Coast with no way of furthering his invasion plans. Harold, with an army made up of the levy6 and his personal guards arranged his shield wall at the top of Senlac Hill7. William was left with no choice but to prepare at the base of the hill and to attack up it, taking away the advantage of speed from his heavy cavalry. However, in William's favour, Harold's men had just endured a forced march after the battle of Stamford Bridge and were tired, worn and bloodied, while William's men were fresh.

Despite this, William's charge could not break through the shield wall, and the rumour passed that William himself had been killed. William took advantage of this, feigning death and ordering his troops to retreat. Harold's shield wall, sensing victory, broke and charged upon the retreating Normans. Harold's infantry were therefore conned into leaving their shield wall weak, so when William's army turned back to face Harold's, they were able to gain the upper hand. Harold's forces were butchered thanks to the careful deployments of William's archers. Legend holds that Harold was shot in the eye before being killed under the Norman swords.

With Harold defeated, the way to London lay open and, with no one to fight against him, William was crowned King on Christmas Day 1066. To commemorate his victory and to mark the death of a respected adversary, William had the abbey at Battle built with the altar lying upon the place of Harold's Death. William went on to pacify England, commision The Domesday Book, and start castle building in earnest, including Windsor Castle and The Tower of London. He also established the Exchequer8, the archaic name for the Treasury.9William the Conqueror's invasion of 1066 was the last successful invasion of the British mainland, nearly a millennium ago. Ever since then, the Head of State has been able to trace their lineage back to William.

1Later to become the House of Lords, the present day Upper Chamber of the British Parliament.2Properly King Harold Hardrada, but it would be too confusing to have two Harolds.3Ruled 1016-1035.4An honour accorded to few, showing that God, through the Pope, was on his side.5A man-made defensive mound with a wooden palisade fortress on top.6Local peasants who bolstered the army in return for rewards, and to fulfil oaths of service in return for protection.7Though more accurately called The Battle of Senlac Hill, it is this that is known to most people as the Battle of Hastings.8The word exchequer comes from the huge boards used for tracking the royal accounts, which looked like chequered boards.9Hence the full title Chancellor of the Exchequer. In an interesting side note, the Head of the Treasury is not the Chancellor but actually the Prime Minister, who among other titles is First Lord of the Treasury.