Hi. My name is Kaz. This has been my very own corner of h2g2 for a very long time now. I forget exactly, but I think I joined this site in about 2002 so I have been here quite a while! I thought it was about time I gave my space a proper overhaul, so here it is! I have been a fan of the Hitchhikers Guide books since I was at school. I read them all and then got into the Dirk Gently books too. I always thought Dirk Gently’s Holistic Detective Agency would make a good film or even animation. The BBC recently adapted it for radio with Harry Enfield as Dirk, and that was really good.
I often wonder what Douglas would have made of h2g2 if he was still here, as it has changed a lot, but in a good way. There is now a group of video enthusiasts on here, The h2g2 Aviators. They are putting video blogs together for us. I think that’s a great idea. I hope Douglas would have been proud of us for pushing the boundaries of h2g2. As well as the Hitchhikers Guide I am also a big fan of Doctor Who and Torchwood. 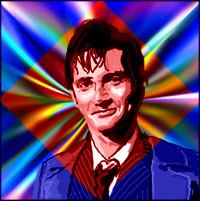 I also watched Life On Mars avidly when it was on. I still don’t know what to make of the spinoff, Ashes To Ashes.

Aside from sci fi, I am a total music lunatic. If I listed all the bands I like here I’d here all night, but let’s say anything from Keane to Queen via Crowded House , Pink Floyd and David Gilmour to Martin Simpson and James Taylor.
I like to play the guitar (and a bit of piano sometimes) and I am a member of h2g2’s Musicians Guild. They are great guys and have given me a lot of musical advice. Pop over there sometime if you like. Yeah, so music is really my main “thing” in life. I like to review gigs too. At the moment I am trying to find a job in journalism, but no luck yet.

The Campaign to rename Thursday 'Thing'.
The Myth of 42
Campaign For A *chocmuffin* Smiley! This campaign was something me and Not Panicking Yet thought up. Something for the chocolate fans. Cheers Kaz