Nik Kershaw - Singer/Songwriter Content from the guide to life, the universe and everything 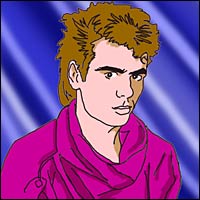 In the relatively brief period he was in the public eye, Nik Kershaw did more for what has been called 'real music' in the early eighties than many others. As punk was losing its grip on the public's imagination and the New Romantic 'movement' was peaking, he took the blandness away and made it something interesting.

Nicholas David Kershaw was, for a while, destined to hide more wallpaper in bedrooms than Adam Ant or Wham!

Born in Bristol on 1 March, 1958, Kershaw spent all his formative years in Ipswich, where he attended Northgate Grammar School. It was also here that his first foray into the music scene occurred, with the band Half Pint Hog. One hesitates to assume that the band was named because of Kershaw's diminutive 5' 4" stature. They played Deep Purple covers but the career of Half Pint Hog was short-lived; there appeared to be no impetus and they only played three gigs under that name.

Kershaw left school in 1976 and worked as a shop assistant and in the Department of Employment for several years, while playing in a jazz-funk outfit called Fusion in the evenings. They released an album and a single, on Telephone Records. The album, Til I Hear From You, contained an early rendition of 'Human Racing, which was eventually to become the title track of Nik's first album.

Fusion broke up in 1982, but Kershaw was not disheartened. He decided to go it alone, and spent six months writing songs so that he could present himself, with a full portfolio, to different music companies. He met his manager, Mickey Modern1, and before too long, he was signed to MCA and was in the studio in early 1983. With Peter Collins as his producer, Nik began laying down tracks for his debut album Human Racing.

The Music and The Man

Nik's blend of good, solid pop songs, woven with synthesiser and memorable guitar riffs, was, it seemed, just the sort of thing the music-buying public had been waiting for. But there was more subtlety to Kershaw than that. On the first album, Human Racing, the wry lyrics in 'Bogart' and 'Gone to Pieces' gave life to a deeper, more introspective writing talent. And while he obviously did not eschew the use of the technology available to him in the studio, the use of multi-tracked voice on 'Shame' on You is an eye-opener; listen out for the milk bottles on 'Bogart'.

Lyrically, Nik's second album, The Riddle grew, while keeping his musical roots firmly in the pop environment. The album went platinum in the UK and for the next year or so, the radio reverberated to Kershaw's distinctive brand of music. Nik toured extensively with his band, The Krew, who consisted of:

At this time, Kershaw was also involved in Live Aid; he played a short set at London's Wembley Stadium in 1985, where the crowd rocked to the familiar sound of 'Wouldn't It Be Good'.

It wasn't until 1986 that Nik's third album, Radio Musicola was released. It failed to have anywhere near the success of the first two, and it seemed that Kershaw's career was in decline. He faded from the public domain, but continued to write and play, most notably, in the late 1980s, when his distinctive guitar playing featured on Elton John's single, 'Nikita'.

His fourth album, The Works, was released in 1989. It made little impression on the charts, but one track in particular stood out. While revisiting some of the style of the earlier albums, the song, 'Elisabeth's Eyes' had a depth that was to signal a writing resurgence and was an indicator of what was to come: but it would be close to ten years until that particular tree bore any fruit.

After the release of The Works, Kershaw ceased to play live gigs in 1990. He worked away quietly, behind the scenes, writing and producing. It wasn't too long before he had another foray into the world of the top five; he wrote and produced the phenomenally successful Chesney Hawkes single 'The One And Only', in 19913. This song actually reached the number one slot.

In Kershaw's own words:

I was basically fed up with the touring and recording. So, the big plan was to sit at home, write songs and send them to my publisher, who'd give them to Tina Turner or whoever.

Kershaw goes on to relate that it didn't actually work out that way, and that writing for somebody else was, really and truly, a totally different kettle of fish. That said, during that time, he worked with many big names, both writing and producing, including: Jason Donovan, The Hollies and Tony Banks4.

During this period in the studio with other performers, Kershaw relates that, when he had some spare time, he would work on some of his own material. He still used the technology but, it seems, preferred to utilise the age old method of songwriting - paper, pen and acoustic guitar. Eventually the point came when he had ten or so tracks laid down and the thought occurred that he was actually writing an album.

He got a band together that included his old guitar player, Keith Airey, and gigged in Europe and showcased the new material at the Jazz Café in late 1998. The culmination of all this work was the album Fifteen Minutes, released in 1999.

And here the tree bears the fruit! The promise of the song 'Elisabeth's Eyes' was realised on an album that was intrinsically Nik Kershaw, but a more mature, self-analytical Kershaw; a man who was writing the songs that, he said, he felt unable to write during the 1980s, for fear of being labelled 'self-indulgent'.

A single was released from the album, 'Somebody Loves You', along with 'Billy', probably one of the best tracks on the album, and although not receiving a huge amount of attention across the board, it was mildly successful. Not having a major chart showing appeared not to worry Kershaw; he seemed quite happy to let things take their course and continue in the vein of writer/producer/performer.

Some would say that with Fifteen Minutes, he was jumping on the 1980s revival bandwagon, bewailing the fact that his initial success was so short-lived... and perhaps they had a point. But it is, nonetheless, good to hear him singing and playing again and bringing some of that quirky, pop charm back to music.

There have been several compilation albums released over the years, they repeat and repeat. It is probably better to go and have a look in the archive bins and get a true perspective on Nik Kershaw's past work.

Nik continues to write, and his most recent album of new material, called To Be Frank, was released in 2001, and there is word that another album is in the pipeline, likely to be released in summer 2006.

For more information and discussion on Nik Kershaw, visit his Official site

1Who also managed Nine Below Zero at the time.2His brother Don played in Rainbow.3From the film Buddy's Story.4The keyboard player with Genesis.