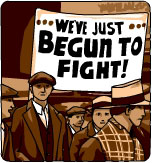 For freedom and SEP's everywhere...

##Go to the desk sergeant, give him your details, and we'll get you kitted out##

Alright you lot, listen up. Anyone can join this army so, what ya waitin' for? Go to the Signing in room and Sign up!

106 Proud Members of the Terranic Army

The Reinstatement of Field-Marshal Terran

After a prolonged period of absence as leader of the Terranic Army, Lord Admiral Field-Marshal Ignatious Tiberius Augustus Terran has resumed command. It is believed he was first sighted on a horse riding in, rumoured to have returned from fighting an army with nothing but an egg whisk, a potato peeler and his wits. But as we only have his word to go on this is open to interpretation. He has already set himself to the task of redeveloping the Terranic Army, and waking its many sleeping members.

REGIMENT OUT OF SERVICE

Welcome to the Terranic Army Base, here are the places on site:

And here is a link to the World War Battlefield

Here is a Link to our (now very out of date) Alliance Page with the Potato Army. We are also allianced with the h2g2 Knights.

Here is a Link to the Weapons Development page, run by Spook Corp.

Terrania. This is the home for the Terranic Army, and a lot of other things. Why not go there and become a citizen.