This is the bit where you get to learn all about Bluebottle, who he is, what he likes, what he's doing etc..

Actually, it is all about 10 years out of date1. One day I'll do something about that...

What is a "Bluebottle"?

I am a Beatles, Wings, Paul McCartney fan. Although I do also like Gilbert & Sullivan, John Williams, Lighthouse Family, and I am getting to like Madness, Manfred Mann, Buddy Holly, The Hollies, occasionally Wham!, Queen, and a lot of sixties music.

My favourite authors are Isaac Asimov, Arthur C. Clarke, Stephen Donaldson, Frank Herbert and of course Douglas Adams. I also am reading books by J.R.R. Tolkein, Julian May, Terry Pratchett, John Wyndham and lots of others. In fact, most sci-fi eventually. I also have read most of the Bond books - all the Ian Fleming, and most of the John Gardner. John Masefield's great too!

I enjoy being able to play the Bugle - something I learnt in the Boys' Brigade.

I also like writing. So far I have written lots of poems, and a few novels, including:

I joined the Guide on 2 June 1999, after Peregrin told me about it and seemed to spend all of his time on it. I only spent a week on board before Uni ended and I had no computer to H2G2 on. But as soon as I returned to uni in September 1999 I was back on H2G2 again, and have been a regular ever since!

I think that my biggest contribution to the Guide would have to be the Waterworks and Beach, which is still popular after all this time!

And I am also trying to build up So Long, And Thanks For Laughing - the H2G2 Joke Directory.

Check out my favourite places to go from my Links Page

Of course, the best H2G2 thing I've done so far would have to be the meet-ups, where I met many of the researchers in real life!

It's also worth Reading Demon Drawer's review of me in 45 Words or the Venerable Researchers interview. 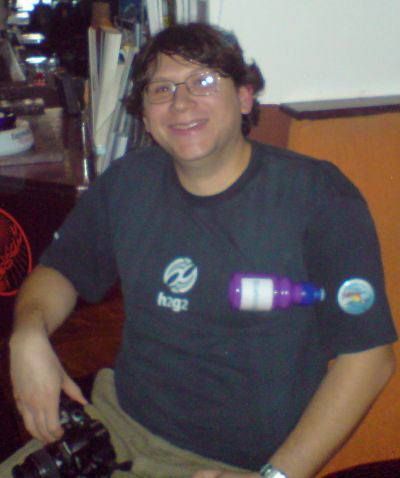 None of the below has been updated since 2000:

My real name is Matthew Lloyd Sprack, and I've lived in Sandown, on the Isle of Wight, since I was born on the 18th January 1980. My parents divorced when I was 8, and both later remarried. My father, Gareth Lloyd Sprack, lives in Ryde on the Island with Valerie his wife, and Rhiannon Elizabeth Sprack, is my half-sister, who's 10 years younger than me.

I also have a sister who is a 16 months older than me, called Rebekah Julia Sprack, who lives with my mother Julia Margaret Bent and my step-father John Charles Henry Bent in Sandown. I also have a step-sister and brother, but don't really know them.

My friends on the Isle of Wight that I remember well were Tristan, Andrew and Daniel. I also had many great times in the 1st Sandown & Lake Boys' Brigade. I used to go to both Sandown Baptist & Sandown Methodist churches.

I'm currently a history student, after being a Law student for 2 years, at Southampton University, and I rent a house in Southampton. Since being in Southampton I've made friends with Ian Ferguson, Tim Jones and Simon "Garfie" Turner. Ian is Peregrin on the guide, and Tim is Roasted Amoeba, but Garfie is not on H2G2 at all.

So, what is to say? Well, the most important thing is that I'm engaged to Sarah, who is Eccles and Fish Killer on the Guide. Another good friend on the Guide is Ben, AKA The Fish and ScifiBloke.

This is in Bad Taste

Do you feel sad? Depressed? Lonely? Do you wish you had someone to talk to? Something to do? Some activity to look forward to? Are you fed up of unpaid bills, and getting junk mail? Are you on a diet? Does your bum look big/small/medium sized in all the clothes you wear?
Then Commit Suicide! Just end your problems with a happy knife, and never be troubled by anything again. Join the Suicide Club. New members wanted.

I don't really know why I've got a counter. Is it vanity? Am I egotistical and want everyone to see I'm a well-visited page? Am I trying to copy everyone else who has a counter? Was I just trying to see if I was able to put a counter on my page? I don't know. But for some reason, I decided to have a counter, and here it is.From

SPECIAL OFFER!!!!
e-mail me before 2001, and get a free sausage!3
1The statement that it is 10 years out of date is now 5 years out of date.2He who was always deaded 40 years before Kenny of South Park. Alas, I only have 80 Goon Show episodes on tape3This e-mail address hasn't actually worked since 2002.