'Dune' - the Film Content from the guide to life, the universe and everything 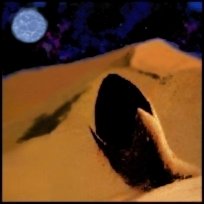 In 1965, Frank Herbert published Dune, a book which quickly became a hugely popular cult novel, a classic in the field of science fiction. It told the first story of Herbert's famous Dune universe - of how Paul Atreides of the House Atreides left his home world of Caladan with his House, to take charge of mining the all-important spice, Melange, on the planet Arrakis, also known as Dune. When he got there he found that House Atreides' rivals, the House Harkonnen, with the help of the Emperor, had prepared a trap. The plot is vastly more complex than that, and is almost impossible to summarise adequately in a few words. All that need be said about it is that it is an extremely enjoyable and worthwhile read.

Sequels to Dune were written - Dune Messiah, Children of Dune, God Emperor of Dune, Heretics of Dune and Chapter House Dune, before Frank Herbert sadly died in 1986. Since 1999, Frank Herbert's son Brian Herbert, with Kevin Anderson, has been writing a trilogy of prequels for the Dune universe - House Atreides, House Harkonnen and House Corrino.

Considering the popularity of the series, it was inevitable that a film would be made.

The Making of the Film

Making a film version of Dune had been considered before, but it was not until the early 1980s, after the success of science fiction films such as Star Wars and ET The Extra-Terrestrial, and the popularity of Battlestar Galactica on television that work on filming Dune was begun. The director chosen to make Dune was David Lynch, who had already directed Eraserhead and The Elephant Man. David Lynch was so keen to film Dune that he turned down the opportunity to direct The Return of the Jedi.

Filming began in 1983, and it was first shown in cinemas in December 1984. Although David Lynch had intended a four-hour epic, the released version was only two hours and 17 minutes long. This was because Universal, the studio behind the $50,000,000 epic, wanted the film released with a shorter, and what they considered was a more audience-friendly, running time. David Lynch was forced to edit his film and shorten it to satisfy the studio, and as a result of which Dune lost some of its comprehensibility. For example, you are not given a satisfying answer to why House Harkonnen are acting as they are, which is much better explained in the novel. Much of the story's complexity is left out.

David Lynch himself considered working on a director's cut in 1984, yet he abandoned the project in order to create Blue Velvet, one of the most original and distinctive films of the mid 1980s.

Despite being shorter than intended, the film Dune is still a must-see film. It is dark, haunting, and the score by Toto is very distinctive, overall making it as much of a science fiction classic as the book is. However, to follow the intricate story line in greater depth, and to appreciate the complexity of the story, reading the book is essential.

Who Was in Dune?

Several famous actors starred in Dune. Of particular note are Patrick Stewart, who went on to star as Captain Jean-Luc Picard in Star Trek: The Next Generation; Sting, the famous rock star; Jürgen Prochnow, who starred in Das Boot; and Max Von Sydow.

This is a list of the major actors in Dune:

It is not just the actors that made Dune the masterpiece it is. Dune also had stunning special effects - many of the creatures and animals involved such as the Guild Navigator and the all-important Worms, were made by Carlo Rambaldi, famed for creating ET.

Differences between the Book and Film

There are several differences between Frank Herbert's book and the David Lynch film. This is not surprising considering the complexity of the novel - if every scene had been filmed, the film would be several times the length. So unsurprisingly a lot of detail has been left out, as well as the novel's complexity.

Among the differences between the novel and the film are include the facts that:

Another major difference is that the film ends with rain pouring out of Arrakis' normally dry sky - something that not only does not happen in the novel, but Liet-Kynes (the Fremen leader and Imperial Ecologist) and the Fremen definitely do not want to happen.

A lot of minor details are also left out of the film, such as explanations of the Landsraad, CHOAM, the Orange Bible, the Butlerian Revolt, Lazgun/Shield reactions and the Sardaukar terror-troops. These are explained in a lot more depth in the novel.

This version, despite including over half an hour of previously unseen footage, was not liked by David Lynch, and he requested that his name be removed from the credits. This version is known as the Alan Smithee version3. Not only is David Lynch not listed as the director, the name 'Judas Booth', a reference to both Judas Iscariot, the betrayer of Jesus, and John Wilkes Booth, President Lincoln's assassin, appears instead of David Lynch as the screenwriter.

The three hour Dune has many extra lines of dialogue added which were previously removed, as well as a few extra scenes. The main new scenes are with the Fremen, the inhabitants of Dune. These include more scenes with Max Von Sydow as Liet Kynes, including one where Patrick Stewart as Gurney Halleck plays an instrument called the ballisett. The Fremen way of life is explained in greater depth, as we see Paul Atreides fight Jamis and after his death, we see his body being liquefied and Paul being awarded the water. Another scene added is seeing how the Water of Life is made from a young infant sandworm.

However, as this version was released for television only, several scenes were edited out as they were considered too gruesome for young children to watch. These include the Beast Rabban squeezing a mouse and drinking its guts; Baron Harkonnen unplugging a man's heart and watching him bleed to death; Baron Harkonnen spitting on Lady Jessica and Alia; and Lady Jessica and Reverend Mother Gaius Helen Mohiam suffering nosebleeds when Paul takes the Water of Life.

There are also disadvantages to the three hour version. Firstly, in all the new scenes of the Fremen, the Fremen's eyes are not blue-within-blue as they are for the scenes in the David Lynch version, and so you see characters such as Stilgar frequently changing eye colour. Another mistake is where, in a new prologue, the new narrator tells us the year is 10,192 at the beginning of the film, and 10,191 halfway through. The original introduction placed the year as 10,191 in both the beginning and middle. The original introduction, and all the narration, was originally done by Virginia Madsen, who played Princess Irulan. This was removed and replaced by a male voice and a ten minute long prologue giving an over-simplified explanation of what the film is about. This narrator introduces many of the characters and explains what is going on in several scenes, but overall this interferes with the story and slows it down - the narration by Princess Irulan tied in with the novel better, and was far more suitable. Princess Irulan's role in this version is reduced to that of being in the background in a scene with the Emperor.

Another disadvantage of the new version is that it splices together scenes from other parts of the film to give you the impression that you are seeing something new - the main scene in which this is done is where Reverend Mother Helen Gaius Mohiam 'travels' to Caladan. This scene was never actually filmed, and so was constructed using clips of the Harkonnen's ship, the pilots flying the ship which is carrying the kidnapped Paul and Jessica - this doesn't happen until the middle of the film, but you can just see Paul and Jessica in the back of the scene regardless - and shots of the Reverend Mother from the Box scene. Despite being able to see that it is the wrong ship, containing people who cannot possibly be on that ship, and you see the ship over the surface of Arrakis when it is supposed to be travelling from Caitain to Caladan, it was included in the film, and frankly looks ridiculous. This particular scene was one of the main reasons why David Lynch had his name removed from this version of the film.

Effect of the Film

Despite the disadvantages of both versions of the film Dune, it is still a film that can be seen and enjoyed over and over again. Both versions are available in the UK on DVD, and David Lynch's version is also available on VHS. The soundtrack is also still for sale; its dark themes are well worth listening to.

The film has had quite an impact - it is mainly on the film that the 1993 computer game Dune was based, with many of the characters, especially Paul, looking like the actors who portrayed them in the film. This influence has continued to its sequels Dune 2, the classic 1994 real time strategy game that was the basis for games such as Command and Conquer, Red Alert, and Dune 2000 etc.

Recently a six hour mini series of Dune has been made for the Sci-Fi television channel, starring William Hurt as the Duke and Alec Newman as Paul Atreides.

1Jamis is a Fremen warrior who is killed by Paul Atreides.2Princess Irulan the Emperor's daughter, who doesn't have much of a role in the film but is the narrator for David Lynch's version.3'Alan Smithee' is the Director's Guild of America pseudonym for directors who do not want their name to appear in a film's credits.