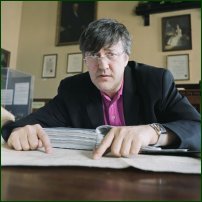 Greetings one and all, and welcome to the H2G2 "The Quite Interesting Society" site.

Created on: 29th April 2007 as a link to the BBC television series called QI - Quite Interesting, where panellists are invited to answer questions that appear to have a simple answer. If they respond with the obvious answer, they have fallen into a cunning trap set by the question-master. Some things that are accepted as common knowledge are in fact, far more complicated. The television show has a structure. Each series covers a topic covered by a letter of the alphabet. A tad optimistically perhaps, the intention is thus to have 26 series of the show. QI television show has become a huge success and so have we, and the H2G2 QI Society is celebrating the start of our fifth season of questions.

Now the programme is rather restricted by the limited amount of researchers available to the BBC. As a result, QI can only have so many programmes. But here at H2G2 we have an almost unlimited number of researchers who truly are experts in Life, the Universe and Everything. In common with the general nature of H2G2, there is no structure, no theming by letter or such Victorian mania. We have an average of 60 playing members and we welcome everyone who wishes to join.

This is an opportunity for all you experts out there to demonstrate the depth of your knowledge and the depth of ignorance within the rest of us. Set us the obvious questions and we, the insufferable mob of HooToo, can try to get the right answer.

We reward those who contribute to the game and players who make guesses which decrease general ignorance, and while we celebrate those who guess correctly, above all we prize being interesting. What is it to be Quite Interesting? - Frankly, you know it when you see it - it's that rare nugget of golden insight about something genuinely surprising - not obvious - frequently tangential but always interesting in it's own right. Accordingly there are klaxons awaiting the unwary, who reach for the most obvious answers - these will deduct points to punish obviousness - so be wary.

To set a new challenge to the combined ignorance that is HooToo, start a new conversation below. Try to give us mere mortals a reasonable amount of time to flounder around with wrong answers before you reveal the amazingness of your knowledge.
If you are using klaxons, decide these in advance, try to outwit the players, anticipate the most obvious guesses to your riddle and treat these as klaxons.

Just because we have left the BBC does not mean we will stop doing what we are doing, so join us and add to the hundreds of interesting, frustrating, stimulating and down right obscure questions that have been asked over the years. Meet other researchers, make friends and you get to see your name on the QI ScoreBoard.
The QI - 2011 Score Board is located at A79171798 and was run by Bob Stafford.
Changes to this page are the responsibility of Shagbark. ~~~ QI