'Jay and Silent Bob Reboot' - the Film Content from the guide to life, the universe and everything 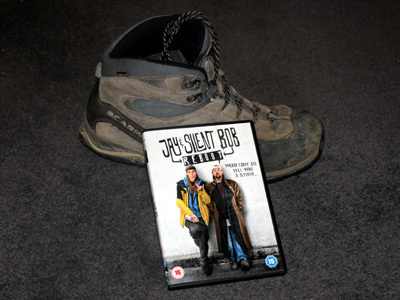 Jay and Silent Bob Reboot (2019) is the seventh and, to date, last film in the View Askewniverse. It is a film that describes the fundamental differences between a Remake, Reboot and Sequel while nevertheless managing to be all three – more on that later. It is 105 minutes long. Like Jay and Silent Bob Strike Back, it is set between Leonardo, New Jersey and Hollywood, California, via Chicago, and the plot involves a film within a film.

After stopping at a Mooby's Restaurant and watching the television they discover that the love of Jay's life, Justice, with whom he had lost touch due to a misunderstanding, has become a Chicago weather presenter. Tracking her down, Jay learns that he had fathered a child, Millennium Faulken, called 'Milly' for short. Justice is now happily married, so makes him promise not to tell his daughter that he is her father. When Milly learns that Silent Bob and Jay are travelling to Chronic-Con, she forces them to take her and her friends along, too, as they are desperate to go there. Jihad, Soapy and Shan Yu are her friends from a support group that Milly was attending because of her feelings at being abandoned by her unknown father.

Can Jay connect with his daughter? What adventures will they experience and who is secretly wearing a catsuit under their clothes? Will vegan Silent Bob be able to order anything he can eat in a Mooby's burger restaurant? Can Silent Bob disguise himself as Kevin Smith? Who else will cameo along the way?

Stan Lee had been intended to play a pivotal role at Chronic-Con, but he died before he was able to film his scenes. A poignant mid-credits scene shows both Smith and Lee discuss the role and Lee reads his first line from the script. Fittingly, this lets Lee get, if not the last laugh of film, one of the last. (The film ends by revealing who had gummed the locks up in Clerks, 25 years earlier.)

The film was distributed by Saban Films in the United States and Universal Pictures elsewhere. The courtroom scene discusses how Saban, the company behind the Bluntman and Chronic reboot, is best known for Power Rangers.

Ben Affleck returns playing Holden McNeill with Joey Lauren Adams again as Alyssa Jones in a scene written while filming was underway to replace the scenes that had been intended to feature Stan Lee. This scene, reuniting the stars of Chasing Amy, was particularly unexpected as Affleck and Smith had not spoken to each other for a decade. Different interviews given by Smith give different reasons for this. In some he said that they had simply drifted apart over the years. In others it was implied that they had a major falling out1. After reading an interview in which Affleck said he would like to appear in Smith's next film, Smith contacted him. After initially wondering what role to cast Affleck in, as every character had been cast, with the exception of Cocknocker2, Smith wrote what he felt the fans would most want to see. He later described the experience of reuniting with Affleck with the words, 'I got my best friend back again'.

A paean to fatherhood, this film is full of references to Kevin Smith's real life, mocking how he had once been thrown off a commercial airline because of his weight, his near-fatal heart-attack and subsequent conversion to veganism. One particularly self-referential moment is when Smith's real-life daughter Harley Quinn Smith's character Milly states that she hates Kevin Smith films for always featuring his daughter who she says is now supposed to be an 'actress', referring to and mocking critics who have accused Smith of nepotism, while Jason Mewes' daughter also cameos, playing Amy. Harley Quinn Smith's performance throughout more than justifies her lead role position as she is able to convincingly convey the wide range of emotions her character experiences. In the film Smith (playing himself) states that it was much easier to get celebrities to agree to cameo in his (fictional) film following his near-fatal heart attack.

In the film Brodie explains what he sees as the differences between a Remake and Reboot. He says that remakes are a new version of a classic film which take the title and nothing else from an existing film and, by purely being a cash-in, result in both a poor film and ruining the reputation of the original. A reboot, on the other hand, maintains everything that was cared for in the original – often referring to it - and adds both youth and diversity. Jay and Silent Bob Reboot, as a sequel to Jay and Silent Bob Strike Back, therefore is a reboot about a reboot. As it has exactly the same plot as the earlier film it can initially be seen as a remake, but by featuring the same actors as Jay and Silent Bob Strike Back and lots of affectionate references to it, with an additional young, diverse cast, it becomes a reboot, with a film-inside-the-film reboot also.

The film contains numerous references to other films, particularly within the View Askew series. This is fantastic for fans who have grown up with these films over the last 25 years but makes it hard to follow for first-time viewers. Obviously it contains a Star Wars moment, with Jay's daughter being named 'Millennium Faulken'. Other comic references include mention of the Marvel film series as well as Silent Bob turning into 'Iron Bob', à la Iron Man. Brian O'Halloran also cameos as himself alongside his Clerks co-stars Marilyn Ghigliotti (Veronica), Ernie O'Donnell (Rick Derris), Scott Schiaffo (Chewlies Gum Rep), and John Willyung3 for a Clerks 25th Anniversary panel at Chronic-Con, appearing in black & white. When Silent Bob and Jay enter the room of the panel they delightfully turn grainy to reflect the earlier film's aesthetic.

One way the film excels is the way in which Jay's daughter Milly is in many ways remarkably similar to her father, despite having a completely different, privileged background. Like Jay she has a silent best friend, or 'hetero-lifemate', Soapy, who is played by deaf actress Treshelle Edmond. There are numerous nods to previous films, including the very first View Askew logo of the creepy cross-dressing clown4. There are even references to films outside the View Askewniverse, with the lawyer apparently a character from Zack and Miri Make a Porno5. Bluntman v Chronic is a spoof of Batman v Superman: Dawn of Justice (2016) to such an extent that the film-within-a-film has the Bluntman character played by former Batman actor Val Kilmer. Similarly Melissa Benoist, the star of television series Supergirl (2015+), appears as the female Chronic; Smith has directed episodes of her television series.

There are references to other films Smith is fond of too, particularly How High (2001), whose stars Method Man and Redman cameo in a hallucination sequence. Another example is the film's homage to Fletch (1985) - Fletch encounters a rude, arrogant man called Ted Underhill and gets revenge by using his name and tab, just as Jay and Silent Bob encounter an obnoxious character with the same name and travel across the US by using his name and credit card. Kevin Smith has long been trying to make his own Fletch film adaptation based on the original novels. Once again Silent Bob gives a lengthy speech at a key moment - after Milly and her friends have been kidnapped by the Klu Klux Klan, he paraphrases a quote from Glengarry Glen Ross (1992) to distract the Klan members for long enough for Jay to rescue the girls.

A weak point in the film is that it never reveals quite how or why the girls were kidnapped by the Klan, especially considering that they are otherwise always shown as being more than capable of defending themselves, carrying weapons, knocking assailants out and defeating well-equipped Russian spies. Nevertheless, despite this one weak moment, by having numerous strong female characters the film easily passes the Bechdel Test.