The Ultimate Marvel Film Guide: 1998-2004 Content from the guide to life, the universe and everything 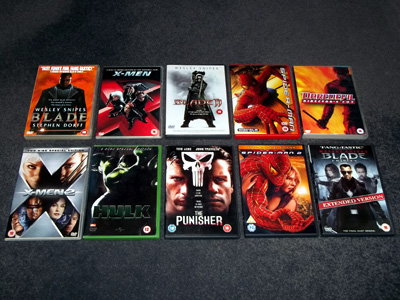 Marvel is one of America's major comic book publishers. Founded as Timely Publications in 1939, it first branched into film in 1944 when it allowed Republic Pictures to make a 15-part Captain America serial. Despite being the most expensive serial that Republic ever made, the story contains numerous changes to the established Captain America character. It is believed that the scripts had been originally intended to be a serial featuring Fawcett Comics' character Mr Scarlet, only to be hastily re-written changing Mr Scarlet to Captain America when it became apparent that Mr Scarlet wasn't popular.

In the 1960s, writer Stan Lee created The Fantastic Four for the comic, followed by Spider-Man, the Hulk, Iron Man, Thor1 and the X-Men. In recognition of this, Stan Lee would cameo in many films based on Marvel characters, including ones based on characters that he did not create.

In the late 1970s, Marvel characters appeared in two campy CBS television series. Thirteen episodes were made of The Amazing Spider-Man (1977-79), while much more successful was The Incredible Hulk (1978-82). Both included feature-length spin-offs. In 1978 a 90-minute pilot for a proposed Doctor Strange television series was also made for CBS, but following disappointing viewing figures this was not made into a series. Two TV Movies featuring Captain America had also been made in 1979.

In the 1980s a film based on a Marvel character had a big-budget adaptation, Howard the Duck (1986). Marvel's credibility was dented when this became an expensive flop2. In 1989 an Australian production of The Punisher was made, which only had a limited release in some countries. It had made numerous changes to the established characters and, like Howard the Duck, was a financial failure.

In the early years of the 1990s Marvel aggressively expanded, purchasing toy and sticker book companies, especially toy company ToyBiz. In order to keep pace with these acquisitions, the price of individual comics was increased. Yet by 1993 the recession meant that fewer of the increasingly expensive comics were being purchased. With a 70% drop in sales, Marvel faced the threat of closure and filed for bankruptcy in 1996. In an attempt to stay afloat, the film rights to many of its characters were sold off cheaply while many Marvel executives fought bitterly to decide who would actually run Marvel. The film rights contracts stipulated that the company that purchased the film rights had to make a film within a limited time period in order to retain the rights, otherwise the rights would revert back to Marvel. Marvel typically agreed to receive only 5% of any film profits back from films made by other studios using their characters. 20th Century Fox purchased the rights to X-Men and also acquired the rights to Iron Man, although Fox sold the Iron Man rights back to Marvel in 1999. Universal Studios had the Hulk and after a legal dispute following the collapse of numerous smaller film companies, Spider-Man's rights were retained by Columbia Pictures. The Fantastic Four's rights were bought by Constantin Film in 1986 and retained in 1994 when a low-budget film was made and never released. They would later co-produce three Fantastic Four films with 20th Century Fox.

After a 1990 adaptation of Captain America received only a very limited cinematic release and an unreleased version of The Fantastic Four was made purely to retain the film rights, the first real Marvel film to hit cinemas worldwide since Howard the Duck was Blade, made by New Line Cinema.

The films based on Marvel comic characters are summarised and reviewed below, with recurring characters and actors listed in bold. Also listed are cameos stating which actors and other noteworthy people, particularly Stan Lee, briefly appear in the films. The guide also says whether or not the film has a post-credit or mid-credit sequence so you know whether to turn the television off as soon as the film appears to end or whether there is an extra scene to watch as soon as the credits have finished rolling.

This was the first Marvel character to have a successful cinema release in the US, following the disaster that was Howard the Duck. Wesley Snipes signed up to make Blade when Columbia Pictures' plans for a Black Panther film in the early 1990s were abandoned. The film's inspiration includes Hong Kong action cinema and an ending straight out of Raiders of the Lost Ark (1981), but perhaps was most inspired by Batman3 (1989).

Despite the fairly modest budget and simple, straightforward plot, the film proved a great financial success, paving the way for two sequels as well as proving that not every Marvel superhero film had to be made for television or flop. This was despite the original ending having to be heavily re-written as it was originally unclear what was happening. The newer ending, in which the heroes try to prevent an Earth-threatening catastrophe, which then actually takes place with few consequences, is not much of an improvement.

Because of the terms of the story rights, Marvel only received $25,000 from the film despite it making $70 million. A scene in which Blade is born would later appear in the Blade: The Series television series (2006).

The X-Men was the first big-budget, bigger box office success featuring Marvel characters, in a film in which the characters were successfully played by well-known and respected actors. This film set the template for all those that followed and showed how to make a superhero film with multiple characters.

The most successful film in the Blade series, Blade II is very confidently directed by acclaimed Oscar-winning director Guillermo del Toro. What the plot may lack in sophisticated substance it more than makes up for in stylistic flair. Like the first film, there is a large degree of blood and violence. Damaskinos' appearance was inspired by Nosferatu (1922) and the nightclub the House of Pain is a reference to The Island of Doctor Moreau.

It is surprising that it was not until 2002 that a Spider-Man film had been made, although episodes from the television series The Amazing Spider-Man enjoyed a brief theatrical release in 1978/9. In 1985 the film rights were bought by Cannon Films, who made an agreement with Columbia Pictures for funding. When Cannon Films faced bankruptcy, the rights to Spider-Man were initially retained by 21st Century Film Corporation. When their Captain America adaptation flopped in 1990, the rights were sold to Carolco. These rights were due to revert back to Marvel in 1996, but MGM had acquired Carolco's film rights after Carolco went bankrupt in 1995. MGM felt that this transaction included the right to make Spider-Man. Remembering their 1985 contract, Columbia felt otherwise. This dispute over who owned the film rights was resolved when Columbia gave up their rights to James Bond films  Casino Royale (1967) and Thunderball material in exchange for MGM's giving up their claim to Spider-Man, enabling Columbia to go ahead with making the film.

This film had the highest opening weekend gross of all time. Unlike other comic-book films, this was very much the first in a trilogy in which each film impacts the one after, with lasting consequences. Spider-Man would later appear in two further films in 2012-14 and would join the Marvel Cinematic Universe from 2016.

Daredevil is one of the weaker Marvel adaptations, with the consensus that Ben Affleck was not really suited for the role, for which he won the Golden Raspberry Award for Worst Actor. He would later play Batman, who like Daredevil is a night-time vigilante. Jon Favreau, who plays Foggy, would later direct Iron Man and Iron Man 2, cameoing as Stark's bodyguard 'Happy Hogan'.

This wasn't the first film to feature the character, as he had also appeared in TV movie The Trial of the Incredible Hulk (1989). The Director's Cut is half an hour longer and considered to be much better. It restored a subplot in which Murdock defends a man wrongly framed for murder. A spin-off film, Elektra, was made in 2005. The rights to the character returned to Marvel in 2012 and in 2015 a Daredevil television series started.

Also known as X2, this is a confident sequel that manages to introduce a wide range of characters without confusion. Much of the story discussed in this film would influence the prequel film, X-Men Origins: Wolverine, only with a different actor playing Stryker.

Despite being a profitable film, Hulk was not as successful as Universal had intended. The film is generally seen as being slow, with too much dialogue and little action. One scene involving a helicopter flying over a desert lasts well over a minute in order for the helicopter to be seen from every conceivable angle. The film does have a stylish split-screen approach that mimics comic book panels, which usually works well, but is occasionally distracting.

Marvel would regain the film production rights to The Incredible Hulk in 2006, although Universal retained the right to film distribution.

The low-budget film is visceral and violent. A sequel was commissioned, but when Thomas Jane chose not to return after being dissatisfied with the script, it became reboot Punisher: War Zone instead.

Spider-Man 2 followed on nicely from the original, with the events of the previous film both mentioned and strongly influencing the characters in this sequel. It's basically the same plot as Superman II, in which Superman gives up his powers to be with the woman he loves. A critical and financial success, it won the 2005 Best Visual Effects Oscar. Considered to have set the benchmark for blockbuster sequels, alongside The Dark Knight (2008), it is thought to be among the very best films inspired by comics.

The final film in the series. Snipes reportedly was disappointed about Blade having a team of supporting characters, feeling side-lined and believing that the film was intended to set up a spin-off series featuring Jessica Biel and Ryan Reynolds11, and sued New Line. Snipes also fell out with the director, David S Goyer; Snipes had hoped to work with del Toro again, but he was unavailable due to filming Hellboy (2004). The perception that Snipes was difficult to work with, combined with Snipes being imprisoned for income tax fraud, resulted in his spending three years in prison and prevented any further films being made, although there was a brief television spin-off series in 2006. By 2013 the rights to make Blade films returned to Marvel.

By the end of 2004, ten films had been made based on Marvel characters, creating five film franchises; only Hulk (2003) had not spawned at least one sequel. Yet despite this success, far more ambitious plans were in motion. In the near future not only would films be made based on Marvel characters, but Marvel planned to become a fully-fledged film studio in its own right.

The Ultimate Marvel Film Guide:
1998-2004 | 2005-2009 | 2010-2014
1Loosely based on the Norse legends.2It was declared the Joint Worst Film with Under the Cherry Moon at the 1987 Golden Raspberry Awards.3The Blade series scriptwriter David S Goyer would later go on to co-write the Dark Knight Batman trilogy.4Co-produced with Marvel Studios and distributed by 20th Century Fox.5Scott Terra as young Matt.6Kevin Smith's film Mallrats (1995) features both Ben Affleck and Stan Lee.7Actually Mystique in disguise.8Rebecca Romijn had previously played Mystique in the X-Men films, under her married name Rebecca Romijn-Stamos. Following her divorce from John Stamos in 2005, she married Jerry O'Connell, of Sliders fame, in 2007.9Also known as Lions Gate Entertainment and simply Lionsgate.10Who did he play against?11Ryan Reynolds would later play Deadpool in X-Men Origins: Wolverine (2009) and Deadpool (2016).