The Ultimate Marvel Film Guide: 2005-2009 Content from the guide to life, the universe and everything 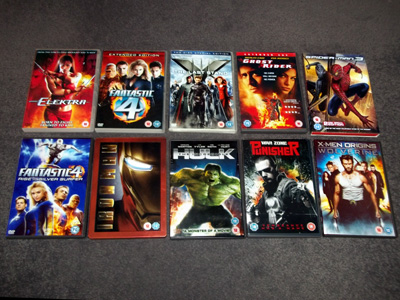 By 2005 it was apparent that with the right story and right appeal, a successful film based on Marvel comic book characters could make millions. Major film studios continued to make sequels to their earlier films, particularly 20th Century Fox's X-Men series and Columbia's Spider-Man, while new franchises were introduced, including Fantastic Four and Ghost Rider. Not every film series would succeed; the Daredevil/Elektra and Punisher series would both grind to a halt following unsuccessful films, showing that comic book adaptations did not guarantee success.

The Rise of Marvel Studios

After the success of X-Men and Spider-Man, and with a stronger financial position, in 2004 Marvel began planning to launch its own film studio and self-finance its own films. After the lengthy process of arranging a deal in which they received finance from Merrill Lynch Wealth Management in exchange for the rights to ten Marvel characters, they launched Marvel Studios. This was the first major film studio to be created since DreamWorks SKG in 1994.

Despite Jennifer Garner's best efforts, there is no denying that this film is poor and it flopped. Unfortunately it was released a year after Catwoman (2004), another dreadful film featuring a female superhero. Unfortunately film studios, rather than taking the lesson that poorly made films with particularly terrible storylines flop, instead came to the conclusion that films about superheroines flop, even though television series featuring heroines such as Xena: Warrior Princess (1995-2001) and Buffy the Vampire Slayer (1997-2003) were very successful. It would not be until Wonder Woman in 2017, 12 years later, that another film focusing on a superheroine would be made.

This was the second Fantastic Four film to be made, but the first to be released; in 1994 a film had been made cheaply purely to enable the studio to retain its rights to the characters. The film made a profit but overall was considered to be disappointingly lacklustre. An extended edition, which was 20 minutes longer, was also released. This included more scenes featuring the Human Torch, who was the least featured of the four in the original film, as well as more scenes showing Ben's relationship with Alicia. The film's main problem is that none of the characters really do a great deal; there's little heroism and apart from an occasional quiet murder, even less villainy.

As Bryan Singer, who had directed the first two X-Men films, was busy directing Superman Returns (2006), Brett Ratner was hired to direct instead. Halle Berry had not originally intended to return to appear in this film, but agreed provided she had a stronger role and different wardrobe. This was agreed to, with her character being given much of Cyclops' role. A different actress, Ellen Page, played Kitty Pryde. Moira MacTaggert would later have a more substantial role when played by Rose Byrne in X-Men: First Class and X-Men: Apocalypse. The film has been acknowledged as being the weakest of the first three X-Men films.

Another weak film, with the effects, especially of the Ghost Rider's flaming skull, alternating between the horrific and laughable. The plot, in which a contract for the souls of a bunch of random dead villagers would mean that the whole world will be turned into Hell, doesn't make a great deal of sense.

Columbia Pictures acquired the rights to Ghost Rider from Dimension Film. Donal Logue had previously played Quin in Blade (1998) and Sam Elliott had been General Ross in Hulk (2003). The film attracted predominantly negative reviews but was financially successful.

The third Spider-Man film has often been considered to have too many villains who individually have little impact. This was largely as a result of the studio insisting the character of Venom be shoe-horned in as they wished to set up a potential Venom spin-off. Although the symbiont appears at the start, it isn't until an hour later that it has any impact on the plot, and the other characters have even less chance to express themselves. There are some humorous moments with the aggressive, confident Parker who is affected by the symbiont, and Brock's role as Venom neatly compares with Parker's powers as Spider-Man. That said Sandman suffers from a lack of motivation, one minute fighting Spider-Man and the next saying how actually, he doesn't really want to after all.

The trilogy's loose ends are quite neatly tied up overall. Despite being a financial success and another sequel being expected, disagreements between Sony Pictures (who own Columbia Pictures) and director Sam Raimi meant that the expected Spider-Man 4 was never made, and nor was the projected Venom spin-off. Instead by 2012 Sony decided to create a whole new Spider-Man series from scratch, with a new cast and new director, the appropriately-named Marc Webb.

Although more actually happens in this film than the first one, it had disappointing box office takings, possibly because it was competing against Spider-Man 3. Although there had been plans for a third film in the series as well as a Silver Surfer spin-off, these were quickly dropped. 20th Century Fox tried to restart a new series in 2015 with Fantastic Four, but this also flopped.

This was the first film in the Marvel Cinematic Universe series, in which Marvel self-financed films based on their own characters. They chose Iron Man as a character as it was the most successful character they then owned the rights to that had not had a previous film adaptation. Curiously, much of the filming took place in soundstages once owned by Howard Hughes. An eccentric millionaire playboy with interests in flying, women and film, Hughes was a major inspiration for the character of Tony Stark.

Terrence Howard would be replaced by Don Cheadle in all subsequent films in the series due to a pay dispute; Howard had been the highest-paid member of the cast. The character of Phil Coulson would later get his own television spin-off series, Marvel's Agents of SHIELD (2013+).

This film gave the world the word 'requel'6, only for the world to politely ask for the receipt so it could be given back and exchanged for something else. This is generally considered to be the weakest of Marvel's films, and was certainly the least successful at the box office. There was a disagreement over the film's length - although the director had hoped to have a cut that was 20-30 minutes longer, Marvel insisted the film stay under 2 hours. A lot of footage of Banner undergoing the experiment that created Hulk was therefore trimmed into an opening montage. Although the film set up a sequel, Edward Norton would not return to play Hulk - he was replaced by Mark Ruffalo for the Avengers films. In fact to date (2018) the only direct link with other films in the Marvel Cinematic Universe, other than Stark's cameo and references to the experiments that created Captain America, is Thaddeus Ross' appearance in Captain America: Civil War (2016).

When The Punisher (2004) was in production, Artisan Entertainment was bought out by Lionsgate Entertainment who were keen to release a sequel. However Thomas Jane, disappointed by the Punisher: War Zone script, pulled out. The lead actor was recast, and the new film was considered a reboot rather than a sequel, so although Castle didn't have a murdered daughter in the first film, he does in this one. The film bombed at the box office, earning less than either Elektra (2005) or Howard the Duck (1986), although it had a much lower budget than either. No sequel was made and the rights were allowed to return to Marvel in 2015, when The Punisher became a recurring character in the Daredevil (2015+) television series.

This is generally considered to be the weakest X-Men film to date (2018) and plans for a series of X-Men Origins films, each focusing on an individual character, were quickly abandoned. Sabretooth had previously appeared in X-Men as a savage, mute mutant; here he has a far greater role as Logan's brother, something not mentioned in the earlier film. Brian Cox had played William Stryker in X-Men 2.

In 2009 the Walt Disney Company bought Marvel Entertainment for $4.24 billion, a sign of confidence that the comic book publishing company that had become a major film studio was able to successfully compete with the established players.

1Distributed by 20th Century Fox.2Not the British radio DJ and television presenter.3In the same way that some frequencies of electromagnetic radiation can pass through objects.4Hulk Voice: Lou Ferrigno.5A scene in which Ross meets Tony Stark appears immediately before the credits.6Meaning that this was both a reboot of, and sequel to, the 2003 film Hulk.