The Ultimate Marvel Film Guide: 1944-1990 Content from the guide to life, the universe and everything 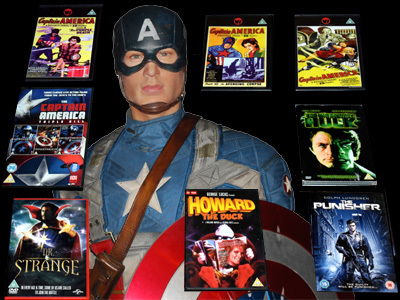 In the 21st Century, cinema has been dominated by an endless supply of superhero films made by the two superhero comic book companies, DC and Marvel, yet throughout the 20th Century characters created by major comic book company Marvel had no impact at all. Marvel, founded as Timely Comics in 1939, first branched into film in 1944 when it allowed Republic Pictures to make a 15-part Captain America serial. This was the one and only film made during the black & white era of cinema to be loosely based on a Marvel character and, while this review is written at a time when these films are being constantly released, it is hard to imagine that the original Captain America serial would be Marvel's only film release for 40 years.

Below are reviews of all the Marvel films made between 1944 and 1990. Also mentioned is whether the films pass the Bechdel Test. This can be summarised as whether the film involves two or more female characters who have a conversation together that does not focus on men in general or specific male characters.

Captain America (1944) was a film serial rather than a feature-length film:

A silly film serial made only two years after Captain America's creation. Marvel Comics – then still known as Timely Comics - allowed Republic Pictures to make it for free in the hope it would boost sales of their comic books. In common with the Flash Gordon or Buck Rogers serials of the time, it shows the hero dying at the end of each episode, and then revealing how he survived at the start of the next. So for instance, Captain America enters a room full of henchmen, shouts 'Hands up or I shoot', is jumped on, the gun is dropped, they all fight for a bit until an evil henchman picks up the gun and shoots Captain America at point-blank range, with no possibility of missing: cue end titles. The next episode begins with Captain America unharmed, explaining, 'the first bullet in my gun is always a blank so I can fire a warning shot'1.

The character of Captain America is nothing like the comic character Steve Rogers, the shield-carrying super-soldier created by a secret serum. The serial Captain America works as a District Attorney during the day, has no shield, and carries a gun instead, which he clumsily drops in any fight with henchmen, and his helmet is missing the wings on the side. This is because Republic Pictures were given the rights to use the character free by Timely Comics in order to generate publicity for the character, yet still it was the most expensive serial that Republic Pictures ever made. They did not write a new serial from scratch and made numerous changes to the Captain America storyline. It is believed that the scripts had been intended to be an adaptation of Fawcett Comics' Mr Scarlet who by day was DA Brian Butler. This was hastily re-written to be Captain America when it became apparent that Mr Scarlet wasn't popular, and explains why one episode is called 'The Scarlet Shroud' despite not mentioning the word 'scarlet' or there being anything red of note.

Gail is definitely the only woman in the city, without even dialogue-less female extras in the background being seen.

In the early 21st Century when it seems a new Marvel film is released in cinemas every week, it is difficult to believe that this was the one and only Marvel film release for 40 years. Things changed as television became increasingly popular, with animated series created featuring Marvel characters.

In the late 1970s, Marvel characters began appearing in campy television series: initially a short-lived series titled The Amazing Spider-Man (1977-79) and a more successful series inspired by The Incredible Hulk (1977-82). Both enjoyed feature-length spin-offs. A Dr Strange pilot was also made, though this did not lead to a commissioned television series. There were also two TV Movies featuring Captain America.

The feature-length television specials made during this period were:

One film based on a Marvel character, Howard the Duck (1986), had a big budget adaptation, yet after this became an expensive flop, the credibility of adapting Marvel's characters into film was seriously dented.

There are two opposing opinions when it comes to Howard the Duck. One is that it is the worst film of all time ever, while others believe it is merely the second or third worst film of all time, after Plan 9 From Outer Space (1959) and/or Santa Claus Conquers the Martians (1964). Either way, it was nominated for seven Golden Raspberry Awards, winning four2, and was a box office bomb3. Some feel it may be so bad it is good, rather than so bad it is unbelievably bad. The version of Howard the Duck originally released was marketed as suitable for children, though since 2008 an uncut Director's Cut has become wildly available and is even more explicit.

The best thing about this film is that its financial failure forced George Lucas to sell off his computer animation company to Steve Jobs, which led to the creation of animation studio Pixar.

A fairly violent film with incredibly predictable plot that is full of plot holes. For example, one instant Detective Berkowitz states categorically that he works alone and will never ever under any circumstances whatsoever work with a partner, the next he is happily partnering Sam Leary. New World Entertainment, the company that made this film, had bought Marvel Entertainment Group and the rights to Marvel characters between 1986 and 1989, before both Marvel and New World were sold on to different new owners, who were uninterested in the film made by the previous leadership. The film was made three years after the character was created, but the Punisher does not wear his famous skull logo shirt.

A film that was heavily criticised by critics and had a very limited cinema release that now is considered to be mainly a curiosity. It fails to do the story justice – not even as a miscarriage of justice. It had been made to cash in on the success of Batman (1989), however, the studio that made it had no funds to do the film justice and the film's tone is uneven, and surprisingly violent in places. Captain America was meant to be released in time for the character's 50th anniversary but languished for two years before a blink-and-you'll-miss-it very limited cinematic release and going straight-to-video.

By 1990 all the films made about Marvel characters had been lacklustre at best, certainly nowhere near as successful as the Superman or Batman films that had been made in the 1970s-1990s. In 1989 the Andrews Group purchased Marvel Entertainment Group and then went on to buy numerous other toy and entertainment companies. In 1995 the market for comic books collapsed, leading to Marvel declaring bankruptcy in 1996. At this stage Marvel were merely a comic book company, and did not become a film company as well until 2004. Urgently needing to raise enough money to keep going as a comic business, they sold off the film rights to as many of their characters as they could. These desperate deals were on extremely unfavourable terms and Marvel received little profit, regardless of how successful the films were. The film companies that purchased the rights were also able to indefinitely renew their rights provided they kept making films featuring the characters purchased within a certain timeframe - typically three or five years. So Marvel would retain the rights to their characters if no films were made in that period, but as long as a new film featuring characters a film company had purchased the rights to, such as the X-Men, was made every three years, the film company would retain the rights for another three years and be able to keep making films featuring those characters.

Marvel's box office fortune was due to change by the end of the decade with the release of Blade (1998).

1In other words, Captain America's entrance shout had actually meant, 'Hands up or I fire a warning shot!'2Worst New Star (the six guys and gals in the duck suit), Worst Visual Effects, Worst Screenplay, and joint-Worst Picture with Under the Cherry Moon (1986).3One definition is that a flop recoups its production budget but not its full marketing budget, whereas a box office bomb fails to even recoup its production budget.4Synchronised screaming does not count as conversation.