'Flash Gordon' - the 1980 Film Content from the guide to life, the universe and everything 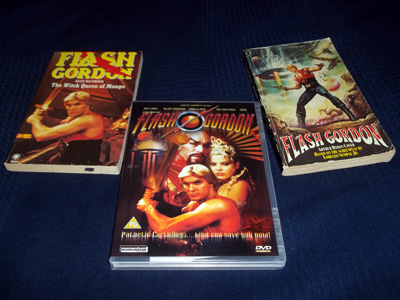 The 1980 film Flash Gordon was not considered a success after it was first released in cinemas, but thanks to its star-studded cast, camp style and soundtrack by Queen it soon became a cult sci-fi classic.

The film begins with the voice of Ming the Merciless, who is bored so amuses himself by playing with the Earth. On Earth, Flash Gordon, an American football player with the New York Jets, is setting off home after a holiday. He is joined in the small aeroplane by Dale Arden, a travel agent. The scene cuts to an observation station, where Dr Zarkov and his assistant are monitoring the skies and recording strange happenings out in space. Burning meteorites start falling, and Flash has to save himself by flying the plane - coincidentally landing in the observation station.

Dr Zarkov, a scientist who used to work for NASA, had discovered the threat from Ming the Merciless. He worked out that the Moon's orbit had been disrupted, so it was on course to crash into the Earth if nothing was done to stop it. Not wanting to fight evil by himself, the doctor tricks Flash and Dale into joining him in the rocket he built and then they blast off into space.

In Emperor Ming's palace on the planet Mongo, the trio are captured and taken to meet the Hawkmen, Treemen and other people that serve the Emperor, including Ming's daughter Princess Aura. Finally Ming the Merciless himself arrives to decide the intruders' fate. All three are spared death, as Dr Zarkov is given to the head of the secret police for indoctrination1, Ming takes a fancy to Dale and sends her to his harem, and Aura wants Flash for herself.

Soon, Flash is wearing nothing but a pair of leather shorts, Dale is dressed in skimpy clothes, and time is running out for the Earth.

As well as the substantial list of credited actors with speaking roles, there were also many other 'men' and 'girls' listed, plus ten 'dwarfs' including Kenny Baker who had played R2D2 in Star Wars.

Although Brian Blessed is a well-known actor and explorer, he has become particularly (in)famous for his role as Vultan, prince of the Hawkmen, with his booming catchphrases 'Diiive!' and 'Gordon's alive?!'. Vultan also says 'Who wants to live forever?!' during the final battle - Queen went on to record a song with that title, which featured in the soundtrack of the film Highlander in 1986.

Timothy Dalton, who would later take on the role of James Bond, starred as Barin, prince of the Treemen and fiancé of Princess Aura. Peter Wyngarde, best known for playing Jason King, author and private investigator, was Ming's masked right hand man Klytus. There were also cameos from playwright John Osborne, Richard O'Brien of Rocky Horror Show and Crystal Maze fame, and Peter Duncan, who became a Blue Peter presenter - they were all Treemen. Robbie Coltrane from TV show Cracker and the Harry Potter films featured in a 'blink and you'll miss it' role loading Flash's luggage into the aeroplane at the start of the film.

Max Von Sydow, a Swedish actor, was renowned for starring in films by director Ingmar Bergman, but he took roles in English language films in the 1970s, notably playing Father Merrin in The Exorcist films. With his menacing stance, sinister stare and expressive hand movements, he was the perfect choice for the role of Ming the Merciless.

Topol was the star of Fiddler on the Roof in 1971 and went on to secure a role in the James Bond film  For Your Eyes Only in 1981. Since Flash Gordon, he has also appeared hundreds of times in the stage version of Fiddler on the Roof. Melody Anderson had had a few parts in TV films and series in the 1970s, but Dale Arden is her most well-known role. She retired from acting in 1995 to become a counsellor.

Sam J Jones was a relatively unknown actor - he had served in the US Marines before getting into modelling and then picking up a part in the movie 10. Spotted by a member of the film's casting team when he made an appearance on the TV show Celebrity Squares, his classic 'blond hair, blue eyes' look and chiselled features made him ideal for the part of the innocent hero Flash.

Universal Studios wanted a film that could attract some of the popularity of Lucasfilm's Star Wars, which had been released in 1977. George Lucas had previously tried and failed to secure the rights to Flash Gordon, the 1930s comic strip character, but Universal Studios were able to make a better offer. An Italian production team, headed by Dino de Laurentiis, was assembled, and Mike Hodges, famous for directing the Michael Caine film Get Carter, was appointed as Director.

Location filming took place on the Isle of Skye. Sets were built in England, at Shepperton Studios, Elstree Studios, and in an industrial park in Weybridge, Surrey. Some of the sets were models, so that model spaceships could fly through them. Many scenes were filmed with 'blue screen' technology, where the actors performed in front of a blue screen and the backgrounds were added to the finished film. The swirling cloud effects in the skies around the world of Mongo were made by filming tanks filled with coloured inks.

The script was written by Lorenzo Semple Jr, who had worked on the camp and cheesy Batman TV show from the 1960s. There was a storyboard for the plot, but many bits and pieces were added by the director as he went along, such as a moving CCTV camera with a fish-eye lens that watched Flash and Dale - it made the 'Ming's palace' set look grander than it actually was.

The main plot followed storylines from the comic strip, and in particular the bright reds, greens and gold used in the comics were replicated on screen, to give the film an exotic look. Also like the comic strip, there were several cliffhanger moments when it seemed that Flash was surely doomed, only for him to be rescued in the next shot.

The final scene opened the door to a sequel, by finishing with the words 'The End?' as a hand reached out and picked up the ring that had held Ming's power. The sequel was never made, but the scene went on to be replicated in the TV series Doctor Who after the Master died in the episode 'Last of the Time Lords'.

Sam J Jones' agent had a disagreement with Dino De Laurentiis, so the actor did not return to England during post-production. As a result, Sam didn't take part in the dubbing sessions to improve the quality of his dialogue - another (unknown) actor was used instead. Sam also didn't take part in any publicity for the film, which had an effect on ticket sales when the film was first released. 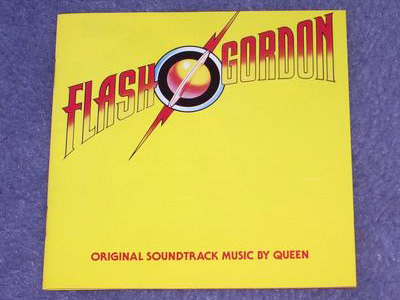 The soundtrack was composed primarily by the rock group Queen, with orchestral arrangements by Howard Blake. Each member of the group contributed something. Brian May composed most tracks. In particular, he was responsible for 'Flash's Theme' and the closing song 'The Hero' as well as a rock version of Wagner's 'Wedding March'. Roger Taylor contributed the 'Love Theme' and music for 'Escape from the Swamp', and John Deacon wrote the theme for 'Arboria, Planet of the Treemen' and 'Execution of Flash'. Freddie Mercury's contribution included 'Ming's Theme' and 'Vultan's Theme' as well as 'Football Fight'.

The music, along with snippets of dialogue from the film, was compiled into the album Flash Gordon, released in December 1980. Unlike Queen's first few albums, which proudly boasted 'No Synthesisers', the soundtrack music included the use of the electric instruments (Queen had first used synths on their album The Game, which was also released in 1980).

'Flash's Theme' was released as a single, and charted at Number 10 in the UK. It reached Number 1 in Austria, but only reached Number 42 in the US charts. The video was directed by Mike Hodges and featured Queen performing alongside a screen showing footage from the film.

Elements from the film influenced Queen's look in the 1980s, too. Freddie Mercury wore a white and red baseball t-shirt just like Flash's at Queen gigs and also in the video for the single 'Play the Game'. The video also featured microphones falling through a starry sky like meteors, and the band performed the song in front of a burning backdrop.

The character Flash Gordon first appeared in 1934 in a comic strip by Alex Raymond, which featured in a newspaper in the USA. It aimed to compete with the similar Buck Rogers cartoon strip in a rival publication. Flash then appeared in episodes on the radio in 1935, and made his silver screen debut in 1936. Cinemas showed a series of episodes, each with a perilous cliffhanger ending to encourage people to return to see how Flash, played by Larry 'Buster' Crabbe, could possibly survive. Further series followed - 1938 saw Flash Gordon's Trip to Mars and in 1940 Flash Gordon Conquers the Universe. A television series aired in 1954.

In 1979-80 a cartoon series, The New Adventures of Flash Gordon, was broadcast in the USA. The series was a spin-off from a feature-length cartoon Flash Gordon - The Greatest Adventure of All, which had been made in 1979. The feature-length cartoon was somewhat different from the series; in particular it was set during World War II rather than in the present day. It was shown on television in 1982. A further animated TV series, featuring a teenage Flash on a hoverboard, was broadcast in 1996, and a cable TV series was produced in 2007-8.

A novel based on the screenplay for the 1980 film was written by Arthur Byron Cover and published in 1981. It contained some stills from the film as well as the text. There was a Flash Gordon computer game released in 1986, and in the same year another animated TV show, Defenders of the Earth, featured Ming the Merciless fighting against Flash Gordon and other comic book heroes The Phantom and Mandrake the Magician. Sam J Jones had a cameo role as himself in the 2012 film Ted, about a man and his walking, talking, adult teddy bear - their favourite film is Flash Gordon. The comic strips by Alex Raymond were published as graphic novels and are regularly reprinted in various forms as well as inspiring other graphic novels about Flash, so the hero lives on.

The 1980 film may not be the original and best, but it nonetheless attracted a large fanbase, and was released on DVD in a 25th Anniversary Collectors' Edition in 2005 for a new generation of fans to enjoy.

1The indoctrination scene contains a flashback through Dr Zarkov's life - the effect is like flash photography and may affect people with epilepsy.