Richard O'Brien - Songwriter, Musician, Actor, and Presenter Content from the guide to life, the universe and everything 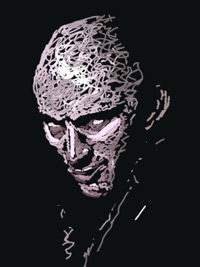 Richard Timothy Smith was born in Cheltenham, Gloucestershire, England on 25 March, 1942. A war baby, and the youngest of four children, he wasn't expected to live through his first night, and apparently his doctor was surprised to find him still alive the next morning.

Richard moved to Tauranga, New Zealand, in 1951 when his father decided he wanted to stop being an accountant and become a sheep-farmer instead. While on the farm, he spent a lot of time riding his neighbour's horse, and became a proficient rider. He also developed his love of acting through the cinema in nearby Hamilton. Richard never did very well at school, though. He was teased by his classmates about his small size, and his teachers thought he was 'a relatively intelligent boy doing badly'.

Richard left school at 15, and moved back to England in 1961 (when he was 22). He tried many jobs, from lorrydriving to hairdressing, before realising that his horse-riding skills might stand him in good stead as a stuntman. Richard landed stunt roles in Carry On Cowboy and Casino Royale among others, but his heart wasn't really in stunting and he decided to try his hand at proper acting instead. He changed his surname to O'Brien (which was his grandmother's maiden name) as there was already another actor called Richard Smith and got his first break on the touring cast of Hair in 1969. It was here that he met his first wife, Kimi Wong, with whom he had a son called Linus.

After a few more acting jobs, Richard teamed up with his wife to become Kimi and Ritz, and they released three singles in the UK ('Merry Christmas, Baby', 'Pseud's Corner' and 'I Was In Love With Danny, But The Crowd Was In Love With Dean'). Richard threw himself into songwriting, and the end result was a bizarre science-fiction/sex comedy hybrid musical called The Rocky Horror Show. The play started at the Royal Court's experimental Theatre Upstairs for an initial run of just six weeks from June 1973 but ended up lasting two years, shifting location to larger and larger venues on several occasions. In 1973 it won the London Evening Standard critics' award for best musical. Clearly and delightfully inspired by B-movie influences, The Rocky Horror Show was an immediate success and launched spin-off productions in Australia and the USA.

In 1975, a feature film adaptation of Rocky Horror was produced, with many of the original London theatre cast reprising their roles. The film version1, called The Rocky Horror Picture Show, wasn't a commercial success, and this lack of success contributed to the split (and later divorce) between Richard and Kimi. Richard then turned his attentions back towards writing and acting, though sadly no major breakthrough successes came his way.

Slowly, The Rocky Horror Picture Show became more popular, with late-night screenings of the film and the rise of 'audience participation' gradually turning the movie into the cult classic it is today. With Richard's career on the up, he began to appear in more films and TV programmes, including Robin of Sherwood (as an evil magician called Gulnar) as well as writing some songs for the film The Return of Captain Invincible.

Although he dislikes 'sexual labels' and refuses to describe himself as straight, gay, or bi, Richard married his second wife, Jane Moss, in 1983, and together they have had two children - Joshua and Amelia.

By the late 1980s, Richard was concentrating on music again and created his alter ego, Mephistopheles Smith, a devil from Club Inferno, otherwise known as Hell. The show Richard created, Disgracefully Yours, was taken on the road.

Soon afterwards, Richard landed the role of presenter on Channel Four's action-adventure game show The Crystal Maze, the role (other than The Rocky Horror Show) for which he is most commonly remembered. He played the role of genial host of The Crystal Maze for four years (from 1990 to 1993), only leaving because he was worried about getting stuck in a rut2.

Since leaving The Crystal Maze, Richard has taken on a variety of TV and film roles, including roles in SpiceWorld and Ever After: A Cinderella Story. He also released his first solo album in 1998, Absolute O'Brien, which is a mixture of jazz and swing, with a touch of rock'n'roll.

Richard O'Brien has most recently been seen on stage in London, playing the role of the child-catcher in Chitty Chitty Bang Bang, and in 2004 the City Council of Hamilton, New Zealand honoured his contribution to the arts with a statue in his likeness.

1For which O'Brien wrote the screenplay.2Richard's role as host of The Crystal Maze was taken by former lead singer of the rock band Tenpole Tudor, Ed Tudor-Pole. The series continued for two more series with Ed as presenter before being cancelled in 1995.