The Ultimate Marvel Film Guide: 2015-2016 Content from the guide to life, the universe and everything 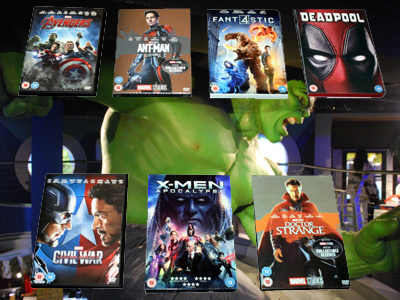 In the 1990s Marvel had sold off the film-rights to many of their titles. While most had over the years reverted to Marvel Studios, owned by Disney since 2009, there were still other studios owning the film rights to popular Marvel characters. Universal Studios held the distribution rights to films purely based on the Incredible Hulk. Columbia Pictures had the rights to Spider-Man and associated characters, but The Amazing Spider-Man 2 (2014) had shown they were struggling to turn their lucrative rights into money-making films. The biggest competitor to Marvel Studios was 20th Century Fox, who held the rights not only to Fantastic Four but also X-Men and associated characters. As long as they kept making films featuring those characters before their film rights expired, the rights were extended. This had allowed them to make a series of X-Men films followed by a recast, prequel series:

Yet by far the most successful studio making films featuring Marvel characters was, appropriately enough, Marvel Studios. The Marvel Cinematic Universe contained inter-connected characters, with each film's events impacting on the plot of the next. Marvel also conceived their films as having over-reaching story arcs and grouped their films into 'phases'. By the end of 2014 the Marvel Cinematic Universe consisted of the following films:

Listed below are all the Marvel film adaptations made in 2015 and 2016, with recurring actors and characters who appear in other films shown in Bold. Also mentioned is whether the films pass the Bechdel Test. This can be summarised as whether the film involves two or more female characters who have a conversation together that does not focus on men in general or specific male characters.

A film that had a difficult journey to the screen, with proposals to make a film based on the character regularly suggested since the success of Honey, I Shrunk the Kids (1989). Since the creation of Marvel Studios, this incarnation of the film was due to be directed by Edgar Wright, who co-wrote the first draft. However, during Wright's completion of the 'Cornetto Trilogy' with The World's End (2013) it was announced that Wright would no longer direct Ant-Man due to 'creative differences'. In the original Marvel Comics, Hank Pym created Ultron, but Avengers: Age of Ultron changed the storyline to make Tony Stark Ultron's creator.

Curiously, the villain's initials are DC, which just happens to be the name of Marvel's rival comic publishing company…

Fantastic Four, also called Fant4stic, was a huge commercial failure. The film met with negative reviews and lost at least $80 million. The film was accused of being rushed into production as, under the terms of 20th Century Fox's screen rights to the Fantastic Four characters, the rights would have reverted to Marvel if they had not made a film within seven years of the previous Fantastic Four film, Fantastic Four: Rise of the Silver Surfer (2007). None of the main cast do anything particularly fantastic and aren't known by their identities of Mr Fantastic, Human Torch, Invisible Woman and The Thing. Doctor Doom's plan to destroy the world also has little impact and provides little menace as all we see it doing is inconvenience some trees and cause a traffic jam.

By far the rudest and most offensive Marvel adaptation to date, Deadpool became the most successful R-rated film in America (Rated 15 in the UK). Reynolds had first played Deadpool in X-Men Origins: Wolverine - his role was one of that film's highlights, so fans were disappointed he did not have a much larger role. Despite its comparatively modest budget by superhero film standards, it became the most successful film in the X-Men series to date on release and was the ninth biggest film of the year, behind Captain America: Civil War, Rogue One: A Star Wars Story, Finding Dory, Zootropolis, The Jungle Book, The Secret Life of Pets, Batman v Superman: Dawn of Justice and Fantastic Beasts and Where to Find Them.

Essentially an Avengers film with 12 superheroes in total, this quickly became a huge box office success and the most successful film of 2016. This was the first film in Marvel's Phase 3.

This film was a box office success but a critical disappointment. Although this film introduces the Essex Corporation in its post-credits sequence, setting up the film for a sequel, the Essex Corporation did not feature in the next X-Men films. The only link is that Deadpool 2 involved the Essex House for Mutant Rehabilitation as an orphanage that seeks to control mutant children through torture and abuse, but that is not directly linked to the post-credit sequence.

The Marvel Cinematic Universe continued to develop and grow. With one of the films making the top ten most successful films of all time list (unadjusted for inflation), the Marvel films had consolidated their place among the annual blockbusters and looked set to complete the decade in a dominant position. Unlike the villains, Marvel's superheroes looked poised to take over the world – at least the world's box office.