'Dogma' - the Film Content from the guide to life, the universe and everything 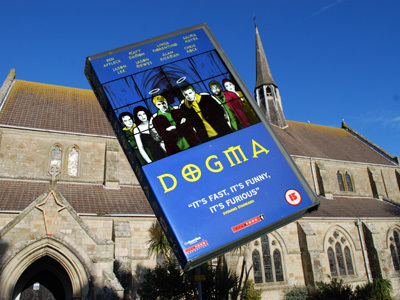 Dogma (1999) is a comedy film made by Kevin Smith that attracted a degree of controversy when it was released. The fourth film in his View Askewniverse series featuring Jay and Silent Bob, it is in many ways his most ambitious. The plot is simply a road movie with the main cast undergoing a heavenly quest as they travel from Wisconsin to New Jersey. The film deals with questions of religion and was written to be a 'modern psalm' celebration of faith and belief, but was not always seen as such. At 123 minutes long, it is the longest film in the View Askewniverse series to date.

As part of a Catholic recruitment drive that coincides with the centennial celebration of his church in New Jersey, Cardinal Glick announces that the Pope has authorised him to say that anyone who visits his cathedral on the day that it is rededicated will have all their sins forgiven. Bartleby and Loki, two fallen angels living in Wisconsin, decide to take advantage of this. They believe that if they cut off their wings to become human and pass through the cathedral's door on that day and then die, with all their sins forgiven they will be allowed back into heaven as though they had led blameless lives. They do not realise that if they have their sins forgiven and re-enter Heaven against God's will, it will overrule the word of God and prove that God is not omnipotent and therefore all creation will be destroyed. They are being manipulated by demon Azrael who would rather cease to exist and take all of creation with him than continue to dwell in Hell.

Bethany, who works in an abortion clinic and unbeknown to her is the Last Scion, the sole remaining direct descendent of Jesus' mother Mary, is tasked with going to New Jersey and preventing the angels from entering the church. She is told she will be aided in her quest by two 'prophets', who turn out to be Jay and Silent Bob, as well as Serendipity, the Muse of Inspiration, and Rufus the Thirteenth Apostle, who was written out of the Bible because he was black.

Meanwhile Bartleby and Loki decide that, if their sins are all going to be forgiven anyway, they may as well go on a bit of a killing spree on the way. Bartleby particularly seeks revenge, angry that humanity was given free will whereas angels were expected to live an eternity of service.

Can Bethany stop angels from entering a church when she has lost her own faith? Can Silent Bob defeat demons? Is Wisconsin really worse than Hell? Will God reveal that the answer to Life, the Universe and Everything really is 42?

Smith had been unable to cast his preferred choices for the film, intending Joey Lauren Adams to play Bethany. As Linda Fiorentino had starred in the highly successful big budget blockbuster Men In Black (1997), however, she was the studio's favoured choice1. Naturally Emma Thompson was considered to be God alongside Alan Rickman as the Voice of God, but she was unavailable due to pregnancy and wished to concentrate on her family.

Kevin Smith, who grew up attending a Catholic school, wrote the first draft of this film during a crisis of faith even before he had written Clerks, although for many years it was outside his budget as well as his comfort zone. Following the success of his third film, Chasing Amy, he felt mature enough to tackle the subject. Miramax funded the film, but Miramax's parent company, Disney, were unwilling to be involved in the potentially controversial film and chose not to release it. Instead the then head of Miramax, Harvey Weinstein, bought the film distribution rights himself. Britain's FilmFour distributed the film in Europe and in the US this was the first film widely distributed by Lionsgate. Smith overcame his crisis of faith and has credited God in the with thanks to section of the end credits in all his View Askewniverse films.

This film met with considerable criticism from the US Catholic League for Religious and Civil Rights, which accused the film of being blasphemous without having seen it, stating that flaky Catholics might stop believing in God if they saw it2. This group, which does not have official Catholic Church sanction, may have been using the film as a media crusade to generate publicity. Smith even received 30,000 pieces of hate mail, including death threats, from claimants asserting that the film questions Christianity, when in fact it does not. Smith wrote Dogma to be a celebration of his faith and be, in his words, a 'modern psalm'. It is certainly irreverent and definitely a tad rude, but never blasphemous.

Smith's film promotes an ecumenical approach to Christianity, arguing that organised religion often blocks faith by getting bogged down in earthly politics. The plot does hinge on two Catholic beliefs: firstly, that of Indulgence in which the forgiveness of sins can be authorised by the church on Earth, and secondly that of Papal Infallibility, which is the belief that the Pope is directly inspired by God when making statements 'ex cathedra' (with the full authority of office) so anything he says must be true. In this film's context it is interpreted to mean that though God is omnipotent He must do what the Pope says3. Other Christian denominations, both Orthodox and Protestant, do not believe in this dogma and believe that God would not in any way, shape or form be restricted by any individual's expectations irrespective of whether they have an authoritative position within any religious organisation or speak only through the office of the head of such an organisation.

In 2007 Smith made Red State, a horror film about a group of extreme right wing Christian fundamentalists who effectively become a terrorist group. He has said he was inspired by his friend Malcolm Ingram's documentary Small Town Gay Bar (2006) which featured an interview with members of a church that regularly pickets funerals of members of the local gay community, where they shout that all homosexuals are going to hell. It is not inconceivable that some of the reaction to Dogma was in his mind when making Red State.

The film passes the Bechdel Test: Bethany and Serendipity discuss faith. Dogma did attract some criticism for having a female God, and also for the fact that God never speaks for herself in this film. Being divine, She cannot talk without destroying any mortals who hear her voice as humans are psychologically and physically incapable of hearing God's actual voice and living, which is why the Metatron speaks on her behalf.

The film does have a weak, ambiguous ending. Following scenes of death, destruction and carnage, at the end God uses her powers to make the butchery vanish. Whether the traces of the massacre have gone, or whether events have changed so that they never took place is never revealed. It is revealed that Bethany is pregnant. An immaculate conception may well have led into a rumoured Dogma II. However, Smith does not own the rights to the characters introduced in Dogma as they had been bought by Harvey Weinstein. At present (2020) Dogma is unavailable to purchase as all distribution rights have lapsed; preoccupied with other matters, Harvey Weinstein is unlikely to licence new distributors in the near future4.

Overall this is another strong entry in the View Askewniverse, although one that is quite different to the others. It is the first film in the series to be a road movie. This format would be repeated in later films, although the heaven and hell theme would not. Dogma does introduce the Mooby Corporation to the View Askewniverse. The Mooby Corporation logo is a golden calf, referring to the Biblical graven image, and the company is seen as a cross between Disney, Barney the Dinosaur and McDonalds, combining fast food restaurants with children's entertainment and theme parks. As with Smith's other films there are numerous in-jokes and things to look out for. For example, a bus company is named 'Derris' after Rick Derris who appears in Clerks, and Silent Bob is seen reading USA Today, the newspaper Smith's wife was writing an article about him for when he met her.

Cardinal Glick is a particularly memorable character, despite his limited screen time. He makes a huge impact as the creator of the Buddy Christ and leader of the Catholicism Wow! Campaigns. Jay and Silent Bob are the unlikeliest couple to be described as 'prophets', but somehow it works. They had travelled across the country to live in a fictional town created by writer/director John Hughes for some of his films, only to be disappointed that the town did not actually exist. After rescuing Bethany from the Stygian Triplets they said they had wanted to earn a profit. Fans of Silent Bob and Jay expressed disappointment that they did not encounter an orangutan during this film, as the joke ending of Mallrats had implied they would.

Silent Bob says three whole words in the film. 'No Ticket' quotes Indiana Jones and the Last Crusade (1989) after he throws angels off the train in a similar way to Indiana Jones throwing Nazis off an airship. He later says 'Thanks' after Rufus says he will put in a good word with Jesus if he cleans up his language. As with all films in the series there is a reference to Star Wars: Jay compares Bethany asking him and Silent Bob to accompany her to New Jersey to Luke and Obi-Wan Kenobe asking Chewbacca and Han Solo to take them to Alderaan. A Jaws homage featuring Jay wearing the cardinal's hat was filmed, but was deleted from the finished film.

1Smith has since been criticised for calling Fiorentino 'difficult to work with' during Dogma's production.2Presumably they also believe that anyone who watches a Mickey Mouse cartoon will automatically believe in the existence of anthropomorphic mice.3This is based on the interpretation of Matthew 16:19, in which Jesus promises Peter, whom the Catholic Church consider to be the first Pope, 'Whatever you bind on Earth shall be bound in Heaven'. An interpretation is that this dogmatic law means God promises to uphold vows made by disciples on Earth, so whatever the Pope says God must adhere to.4In 2017 over 80 women accused Harvey Weinstein of using his position of authority as champion of independent and foreign films to sexually assault women in the film industry with whom he came into contact; in 2020 he was found guilty of third-degree rape - defined as 'engaging in sexual intercourse with a person who is incapable of consent, or under age 17, or who has not given consent for a reason other than the inability to consent' - and first-degree criminal sexual acts.