'Mallrats' - the Film Content from the guide to life, the universe and everything 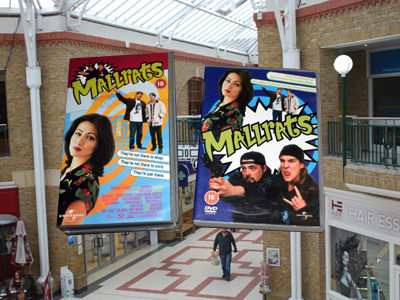 Mallrats (1995) is the second film in Kevin Smith's View Askewniverse series. It is set in a shopping centre in New Jersey, the day before the events of Clerks. This 91-minute film was aimed at a younger audience than Clerks (late teens rather than people in their early 20s. It nevertheless contains many of the key Kevin Smith trademarks, including Star Wars and Jaws references. It is also the first film in the series to show the slapstick side of Silent Bob and Jay, the juvenile delinquent drug dealers.

Ratted Out: The Plot

After TS Quint inadvertently causes the death of Julie Dwyer, who had been due to appear in the pilot for a Blind Date derivative television programme1, his girlfriend Brandi Svenning agrees to appear instead. This is because it is being developed by her father Jared Svenning, who has pinned all his hopes on impressing television executives enough for them to commission a long-running series. The pilot is taking place on the day that TS had arranged for Brandi to travel to Florida with him, where he had planned to propose on Universal Studios' Jaws ride just as the shark attacks. Rightly guessing that Svenning was using this show in the hope of auctioning his daughter off to a better boyfriend to keep them apart, TS's anger causes an argument which results in him being dumped.

Meanwhile TS's best friend Brodie is also dumped by his girlfriend Rene for a vast shopping list of reasons including lack of both ambition and libido. Brodie and TS head to the Mall to cheer themselves up, only to discover that that is where the game show is being filmed and that Stan Lee, creator of Spider-Man etc, is visiting. Brodie also learns that Shannon, the manager of Fashionable Male menswear shop, plans to take advantage of Rene while she is on the rebound and prey on her vulnerability. Brodie asks loafers Silent Bob and Jay to sabotage the game show, but their every attempt to destroy the stage ends in failure.

Can Brodie and TS regain the affections of their true loves? Will Miss Ivannah the topless fortune-teller show them what they need to see? What is more uncomfortable than the back of a Volkswagen? Can Gwen change in peace? Will Willam ever see the picture of a yacht hidden in the Magic Eye picture he has been staring at all day?

Actors and characters in Bold appear in other films in the View Askewniverse. The main characters are introduced with artworks styled as comic book covers with the titles listed in the table.

Jason Lee is the only actor to play two main recurring characters in the View Askewniverse (Brodie Bruce and Banky Edwards), and also plays other characters in both Dogma and Clerks II. Brodie is a comic book nerd who as a teen loves hanging around the Mall and as an adult in later films achieves his dream of opening his own comic book store, inspired by Kevin Smith's comic book store, Jay and Silent Bob's Secret Stash. A mischievous Marvel fan, he remains close friends with Jay and Silent Bob, advising them of events in the comic book world that will affect them while remaining flabbergasted about how out of touch they are.

Heading to the Mall: Making Mallrats

Following the success of Clerks, Smith was approached by Universal Pictures who wished to make a teenage sex comedy in the same vein as Porky's (1981). In order to make a film for the late-teens audience, Smith was instructed to have the main characters in their late teens, to include frontal female nudity and to cut out the swearing. Universal also insisted that it was impossible to make the film for less than $6 million. When Smith said that he had made Clerks for 0.46% of that budget, he was told that had Universal bought the rights to Clerks they would have reshot his debut film.

One of the changes that Universal wanted to make to Smith's initial draft was to have a bigger, more expensive opening sequence. Smith subsequently wrote a more ambitious opening involving Svenning arranging for the Governor of New Jersey (Elizabeth Ashley) to visit the school that TS and Brandi attend in the hope of getting government investment, only for the Governor to be accidentally shot by TS. Though it explained why Svenning hates TS, it didn't work as well as a simpler discussion between TS and Brandi in which they break up and so it was excised from the final cut. The governor is nevertheless mentioned a couple of times in the finished film. The Governor of New Jersey would appear in Dogma, though played by a different actress.

Universal interfered with many of the intended casting decisions. Though they considered Silent Bob a minor character and reluctantly allowed Smith to play him, they were particularly keen to replace Jason Mewes with Seth Green. Smith insisted that Jason Mewes played Jay, even though Universal refused to pay for him to attend rehearsals, to go to Minnesota where filming took place or for his accommodation there. They also insisted on the right to replace him if they were disappointed in his performance.

Smith had originally cast Joey Lauren Adams as Rene. He was forced to give her a smaller role, however, in order to cast a known actress. Shannen Doherty was the most famous person in the film, having starred in television such as Beverley Hills 90210 (1990-4). Similarly Smith had written TS with O'Halloran in mind but had been forced to recast, with the returning character of Willam also now played by someone else. Nevertheless, Mallrats helped launch the film careers of three of the cast. Ben Affleck3 became close friends with Smith but was worried that he would spend his life always being cast as the villain, leading Smith to promise to cast him as the hero in his next film. Jason Lee was a professional skateboarder who was given his first acting break and has since appeared in numerous films; his wife Carmen Lee is the girl on the posters outside the 'Popular Girl' clothes shop. Stan Lee followed his cameo appearance in this film by becoming notorious for appearing in numerous comic book adaptations. Unusually it is Stan Lee, and not Silent Bob, who delivers the words of wisdom that helps the hero realise the importance of true love, save the day and get the girl.

Although filmed in a genuine shopping centre, the Eden Prairie Center in Minneapolis, the shops used for filming were created by repurposing vacant shops within the centre. When hiding from La Fours in the bookshop, Bob puts book Spike, Mike, Slackers and Dykes: A Guided Tour Across a Decade of American Independent Cinema by John Pierson in front of his face. Pierson had been instrumental in getting Clerks seen, submitting it to the Sundance Film Festival. Brodie's home is entirely decorated with posters of Marvel comics in honour of Stan Lee and posters of Universal films, including Tremors (1990). Numerous references to Smith's first film abound, including TS picking up a Clerks hat at the flea market. Brian O'Halloran cameos as Gill Hicks, Dante's cousin. Tricia Jones is the sister of Heather Jones, a minor character in Clerks. Gwen Turner confesses to having had sex with Rick Derris, another character from the earlier film.

Brodie, Bruce and Quint are names in Jaws4. Sadly, Universal Studios' Jaws attraction has long since closed and been replaced. Rene Mosier was loosely inspired by Scott Mosier's younger sister Kristen, whom Smith briefly dated and who briefly appears as a waitress in Chasing Amy. Writer/director/actress Guinevere Turner inspired the character name 'Gwen Turner'. Kevin Smith and producer Scott Mosier had befriended her at the 1994 Sundance Festival where she was promoting her independent film Go Fish, which she had starred in and co-written with her then partner Rose Troche. When Mallrats was in post-production Smith and Adams began a relationship. He has since said that the momentary glimpse in the film of Adams topless is one of his greatest regrets as a filmmaker; however, he had been contracted to include female nudity.

The film had its premiere at ComicCon, following which several comic artists who had enjoyed Clerks asked if they could provide artwork for the film. This led to the comic book-themed opening sequence. The film's end sequence included a number of 'what happened next' scenes, with one jokingly showing Jay, Silent Bob and an orangutan named Suzanne walking off into the distance together. In every subsequent film Kevin Smith made, fans asked whether Suzanne would appear - this was finally paid off in Jay and Silent Bob Strike Back.

The film was distributed by Gramercy Pictures, a company jointly owned by PolyGram and Universal Pictures. Their lacklustre and all-but invisible marketing campaign did not quite seem to know who to target the film to. Mallrats flopped at the cinemas, but successfully found its audience in the home video market.

Though a film aimed at a younger audience than Clerks, this film shows Kevin Smith's talents on a larger scale. Jay and Silent Bob have settled into their roles. Instead of merely leaning against a wall while interacting aggressively with passers-by, they become lovable juvenile-delinquents, which rather suits them. Silent Bob's slapstick facial expressions fully emerge for the first time in this film, ensuring that he steals every scene he is in without needing to say a word.

The film has a strong comic book ambience that pervades throughout, from the very appropriate opening credits onwards. Numerous comic characters are discussed in the film, particularly by Brodie, while Jay and Silent Bob undertake their sabotaging mission with hare-brained schemes right out of comic books. Bob dresses with a Batman-like helmet and winged cloak, carrying utility devices to help ascend buildings, while Jay utters a catchphrase 'Snoochie Boochies!' It is no wonder that in the next film in the series, Chasing Amy, these two characters have a comic book series loosely based on them.

While there are several strong female characters, the film fails the Bechdel Test; when the female characters talk among themselves they discuss either Brodie or TS. Of the characters introduced in this film, only Brodie Bruce would go on to play more than a cameo role in later films in the View Askewniverse. Although the film ends implying that he would go on to enjoy a television career, in later films he is seen running his own comic book shop in this very Mall.

Once again there are several jokes in the background for the eagle-eyed to spot; for example, the Mall contains shops labelled Burning Flesh Tanning and Rug Munchers Carpets. As with other films in the series, a highlight is when Silent Bob speaks. Having spent the whole film trying to develop Jedi powers, he appears to be rewarded for his patience at a key moment, and quotes Yoda: 'Adventure, excitement, a Jedi craves not these things'.

1When he learnt that she was appearing on a television programme, TS remarked that the camera adds ten pounds. This led Julie to rush to the swimming pool in the hope of losing weight through exercise and she died of an embolism on her 698th lap. Hers is the funeral that Dante attends in Clerks.2What 'TS' actually stands for is never revealed in the film.3Affleck is portrayed as 'Buttman' in the opening credits and would later play Batman in the DC Expanded Universe (2016+) having already been Daredevil (2003).4Brodie and Quint are characters while Spielberg nicknamed the mechanical shark prop 'Bruce' after his lawyer.