'Jay and Silent Bob Strike Back' - the Film Content from the guide to life, the universe and everything 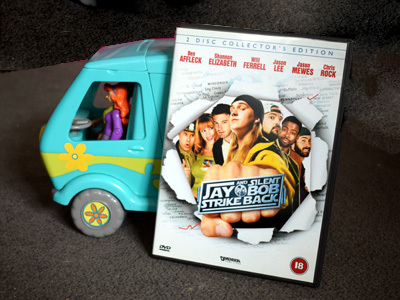 Jay and Silent Bob Strike Back (2001) is the fifth film in Kevin Smith's View Askewniverse film series, each of which features characters Jay and Silent Bob. This bromantic duo consists of dirty-talking sex-obsessed drug dealer Jay, and Silent Bob, who rarely speaks but predominantly communicates through facial expressions. The 100-minute-long film is set over the course of a road trip between New Jersey and Hollywood in the United States at the turn of the 21st Century. This film was intended to be the final instalment of the View Askewniverse and so it features more cameos and references to previous films than Smith's earlier work, yet it is far more than a Greatest Hits compilation of Smith's previous films.

After Randal obtains a restraining order to stop them hanging around outside the Quick Stop selling dope, Jay and Silent Bob hang out at Brodie's comic book store. There they learn that, as all comic book characters are having film adaptations, Miramax are making a film featuring the comic book characters inspired by them. These characters, also called Silent Bob and Jay, turn into heroes Bluntman and Chronic. The real Silent Bob and Jay would therefore be entitled to royalties. After visiting comic artist Holden, who co-created the Bluntman and Chronic comic, they learn that he had sold his rights to his former business partner Banky, who was the one who authorised the film. He shows them the internet, informing them that it was not only created for pornography purposes but also to allow people to slate and criticise films they haven't actually seen, as well as to illegally download and share film scripts and spoil the plots for others. Angry that numerous people are bad-mouthing the fictional Jay and Silent Bob, and taking it personally, Jay and Silent Bob decide to travel across America to Hollywood to stop the film from being made.

On the way, at a Mooby's restaurant, they encounter Justice, a woman that Jay instantly falls head-over heels in love with. She says that she and her friends Sissy, Chrissy and Missy are animal rights protestors and asks Jay and Silent Bob to steal an orang-utan for her from an animal testing laboratory. Really, Jay and Silent Bob are being used as a distraction while the girls rob the neighbouring jewellery depository. Soon Jay, Silent Bob and Suzanne the orang-utan are being hunted by Federal Wildlife Marshal Willenholly, who believes they are the most dangerous fugitives in the country.

Can Jay and Silent Bob stop Hollywood from making a film about them, or at least stop the constant ignorant internet criticism? Will they follow the Hitchhiker's 'guide to the road' to get to Los Angeles? Even if they get there, will they be able to find the right studio, or instead blunder through every other film set in use? When will registered members of the International Fellowship of Marijuana Distributors, Crack-Cocaine Wholesalers, Artists and Allied Crafts of the United States and Canada in New Jersey get dental? Is the reason that Jay's love is reciprocated because Justice is blind? How many cameo appearances can be crammed into one film? And in the Bluntman and Chronic movie, will Dame Judi Dench play Dante?

Struck Out: Making Jay and Silent Bob Strike Back

As Jay and Silent Bob Strike Back was intended to be the final film in the series, many of the characters and actors from previous films make an appearance. Also the 'what happened next' cliff-hanger from Mallrats, showing the characters with an orang-utan, is finally resolved. The list of cameo appearances is too long to mention. There are numerous references to previous films, as well as in-jokes. The Buddy Christ from Dogma appears as a figure on the Nun's dashboard. Holden tells Silent Bob that he can see how he wants to do more with his life than just hang around Jay and hear rude jokes. When discussing their careers, Affleck and Damon admit that sometimes they have to appear in a film because they owe the director a favour. Affleck also asks Silent Bob and Jay, 'Who would pay to see a Jay and Silent Bob movie?' before all three look at the camera and break the fourth wall.

Brodie's Secret Stash was inspired by Kevin Smith's real comic book store, Jay and Silent Bob's Secret Stash. On the Miramax lot they encounter a man dressed as Daredevil, a character who in 2003 would be played by Ben Affleck in a film that Smith cameos in having written for the comic book series. Both his wife Jennifer Schwalbach Smith and daughter Harley Quinn Smith appear in the film. There is a post-credit sequence in which Alanis Morissette as God closes the book of the View Askewniverse2, whose last page reads 'The End'. Unlike the previous films, which ended with the credit 'Jay and Silent Bob will Return In...', this film ends with 'Jay and Silent Bob have Left the Building'.

The film was distributed by Dimension Films, then a division of Miramax releasing independent films aimed at late teen and young adult audiences. It cost $20 million, making it the most expensive film in the View Askewniverse yet, although it was still cheaper than Kevin Smith's next film, Jersey Girl (2004). Several cast members from this film would appear in Jersey Girl, including Ben Affleck, George Carlin, Jason Biggs, Jason Lee, Matt Damon and Harley Quinn Smith. In the DVD commentary track, Smith notes his battles with the MPAA to get the R rating approved: while the film contains almost-constant sexual references, the MPAA was far more censuring of homosexual sex references than the comparative heterosexual sex references. Smith had aimed to normalise all equally.

GLAAD Rags to a Bull?

Smith had been concerned that the characters of Jay and Silent Bob were essentially comic relief and would be unable to support a whole film, particularly as Jason Mewes was battling his own drug addiction at the time. Smith wrote and recorded numerous other scenes intended to prop the film up if the Jay and Silent Bob scenes fell flat. He also hoped that by making a film dedicated to sex and fart jokes he would be free from the death threats and constant criticism that had followed Dogma.

Sadly the film proved more controversial than he had hoped. The film had a considerably longer runtime than was common in comedy films. Test audiences loved the sequences featuring Jay and Silent Bob, but often lost interest in the scenes in which they did not appear so many of these were cut from the finished film. They included a lot of material featuring Will Ferrell, as well as a subplot in which Chrissy, Missy and Sissy were lesbian international jewel thieves that was all but completely excised from the final film. The exception was one line in which Justice tells Sissy – originally her ex-girlfriend, only for this fact not to make the finished film - that she is 'so gay'. Taken out of the originally-intended context, this line resulted in the film being fined for derogatory use by GLAAD (Gay & Lesbian Alliance Against Defamation).

The character of Justice would reappear in Jay and Silent Bob Reboot with a wife named Reggie Faulken.

Another hit film in the series, and one that would have made a fitting finale. There are several funny sequences in the film, including references to other films. The best and most elaborate is a short sequence spoofing The Planet of the Apes in which Jay supposes that the animal testing laboratory is creating a race of superior monkeys that will take over the planet. He describes this as, 'Instead of man spanking the monkey, the monkey will spank man'3. This involved a brief scene filmed on the same beach as the original Planet of the Apes film. The twosome also encounter a spoof of Scooby Doo and recreate a key scene from E.T. The Extra-Terrestrial. On arriving at Hollywood they blunder through various film sets, including one where a Scream sequel is being filmed, referencing how they cameoed on Scream 3. When they finally find the Bluntcave set, it is a fantastic recreation of the 1960s Batman Batcave.

Of course it wouldn't be Kevin Smith without a Star Wars Moment or two. The film title not only references The Empire Strikes Back, it also has an opening caption that reads 'A long time ago in a convenience store far, far away'. To top it off Carrie Fisher makes a cameo appearance and Silent Bob and Jay have a climactic 'lightsabre duel' against Mark Hamill who plays the fictional comic villain.

Of course the highlight of every film in the series is when Silent Bob speaks. In this film he generously gives two speeches. The first shows him losing his temper for the first time in the series, shouting at Jay after his numerous attempts to point out the blatantly-obvious sign that was right in front of them fail. He is also the last character you would expect to start spouting legal jargon.

1Jay has a pet name for her, but it cannot be written here due to being offensive language.2Although it is not the final page of the book of the View Askewniverse and she leaves a bookmark in.3This is a phrase used in the United States that has more than one sexual meaning.