'Clerks' - the Film Content from the guide to life, the universe and everything 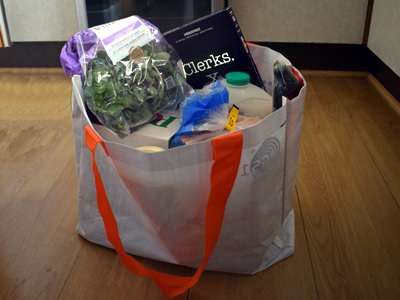 Clerks1 (1994) is an independent black and white film written and directed by Kevin Smith, and the first in his View Askewniverse film series. Smith is a comic-loving film fan who in the mid-1990s successfully broke into the film industry by making this 88-minute feature on a shoestring budget with money raised by selling off his comic collection and pushing all the credit cards he could apply for to the limit. After Clerks became a largely unprecedented surprise hit, it was followed by sequels that had some of the same characters, and all of which featured Smith's rude but witty wordplay.

The film is set over the course of a day at a Quick Stop convenience store and neighbouring video rental shop in Leonardo, New Jersey. Despite it being 20-year-old Dante's day off, he is called in to cover for the ill manager of the Quick Stop. There he finds the shutters over the windows are jammed shut with gum in the locks, there are drug dealers hanging around outside and the customers just won't stop complaining. All of which leads him to repeatedly protest that he wasn't even supposed to be here today.

He also has to put up with Randal, his irresponsible best friend. Despite Randal supposedly managing the video store next door, he longs to sneak off to go to a bigger video store. Dante tries to play a game of street hockey while watching the shop and he and Randal also attend the funeral of an ex-girlfriend. All the while he is trying to decide whether to leave Veronica, his current girlfriend of seven months, who has had more prior sexual experience than he feels comfortable with, for Caitlin Bree. Caitlin was his high school sweetheart and they had a five year relationship, during which she constantly cheated on him. During his shift, Dante learns that she has just become engaged to someone else.

Actors or characters in Bold appear in other films in the ViewAskewniverse.

This film introduces two bromantic couples to the View Askewniverse:

A pair of stoner drug dealers – though they emphasise they only sell what can be smoked. Silent Bob says very little, but on the occasions he does it is either a film quote or something actually worth listening to. His 'hetero-lifemate' Jay is in many ways the opposite, never stopping talking and virtually everything he says is an offensive profanity, sex or drugs related. Jay and Silent Bob long to do little more than hang around each other, leaning against their favourite wall in the world, which is outside the Quick Stop Convenience Store, while selling dope.

Jay and Silent Bob are the only characters to appear in every film in the View Askewniverse. In this film series Jason Mewes has only ever played Jay, while Kevin Smith has also played Kevin Smith in a mocking meta moment.

Dante Hicks is an indecisive but likeable guy whose lack of action means he never lives up to his full potential. His best-friend is Randal, a guy who doesn't care a jot about what others think as long as he can spend time with his best friend Dante, although he normally makes Dante's life a mess in the process. While superficially it appears Randal is a bad influence on Dante, he also spurs Dante on to occasionally actually take action.

Brian O'Halloran has also played various cousins and other members of the Hicks family, including Gill Hicks in Mallrats, Jim Hicks in Chasing Amy, and Grant Hicks in Dogma and Jay and Silent Bob Reboot. Jeff Anderson, a school friend of Smith's who never intended to be an actor, is usually the last person to agree to appear in any film Kevin Smith wishes to make and has reportedly repeatedly refused to appear in a proposed Clerks III. He has played one other character in the View Askewniverse, cameoing as a gun store clerk in Dogma.

Self-Service: The Making of Clerks

Writer/director Kevin Smith made this black and white dark comedy on 16mm film for just $27,575 at the shop where he had worked off and on for four years. To put it another way, the money he spent making all of Clerks would not have paid for a whole second of Titanic (1997) - even after Miramax spent an additional $100,000 on the soundtrack. Filming took place during the night after the shop had closed - to explain why the shop is only lit by internal lights, the shop's shutters were said to be closed due to gum in the locks. As he was working shifts in the shop during the day and filming there from 10.00pm to 5.30am every night, during the three weeks of filming Smith never had more than an hour of sleep a day.

The film concentrates on witty and/or rude dialogue full of film culture references, particularly Star Wars and Jaws. Although almost every customer in the store, from age four upwards, wants to buy cigarettes, when customers purchase anything else the items they are buying always reflect the conversation that Dante and Randal are having. Dante himself was named after 14th-Century author Dante Alighieri, the author of The Divine Comedy (1320); Dante's day in the convenience store is effectively his journey through hell.

When writing the film, Kevin Smith planned to play the character of Randal, who had been given the best lines. When it came to production, however, Smith decided that he needed to concentrate on being the director. Still wanting to appear in the film, he decided to play Silent Bob instead, as he only had one line in the entire film. Producer Scott Mosier plays Willam, also known as 'Snowball', the spaced-out man credited as 'idiot manchild', as well as other roles. Kimberly Loughran was Smith's high school sweetheart2. His mother appears as the milkmaid while his sister plays the woman who proudly, and crudely, boasts that her job involves animal artificial insemination (it should be emphasised that the most disturbing animal imagery in the film is a cat using a litter tray3). One scene in the script, set at Julie Dwyer's wake, proved too costly and was omitted; the tenth anniversary edition of the film recreated this scene in animation. The film's original ending involved Dante being shot and killed during a robbery; this scene was later deleted to finish on a more upbeat note.

Lisa Spoonauer and Jeff Anderson started dating during the making of the film, and later were married for a year. The character of Jay was based on Jason Mewes when he was 16. Mewes was very self-conscious; though he would often dance spontaneously, he was unprepared to dance on demand. His dance in the film was done by leaving the camera running and having everyone except Kevin Smith leave the area. Mewes also was supposed to have Silent Bob's line but, unable to nail it, the line was changed to be the only sentence said by Silent Bob. Smith has since said that the characters of Dante and Randal were reflections of himself, with carefree Randal how he would like to be and the more uptight Dante how he really is.

The film was submitted and accepted by the Independent Feature Film Market. Although the initial screening had been practically ignored, a number of key, influential producers and reviewers gradually saw the film, which allowed it to be included at the 1994 Sundance Film Festival. Sundance is the largest independent film festival in the United States and films that do well there regularly attract interest from the major distributors. Clerks attracted the interest of Miramax4, who agreed to distribute it once the ending changed to remove Dante's death.

Clanks and Clinks: The Sound of Clerks

After Miramax bought the rights to the film and the soundtrack was added, Clerks became the first film in history in which the soundtrack cost more than making the film. As the film became a cult hit5, Sony decided to release a soundtrack album. To promote this they offered Smith a budget of $30,000 to film a three minute music video for Soul Asylum's song 'Can't Even Tell (Theme from 'Clerks')'. Feeling strongly that the music video should not be made for more than the film, Smith shot it for closer to $10,000, featuring Dante and Randal on the Quick Stop's roof playing street hockey against the band, while Silent Bob and Jay lean against the wall underneath. This footage is all in colour.

Clerks inspired a generation of filmmakers by showing that it was possible for anyone – even a lowly shop assistant - to make a film. All that was needed was a good script, plot and acting. The fact the film was made in grainy black and white is part of the appeal – how the film looks and sounds is less important than the fact it was made and succeeded, and is genuinely funny.

The film's key sequence is the Star Wars moment in which Dante and Randal discuss the deaths of independent contractors working on the second Death Star at the time of its destruction. There is also a brief Jaws recreation using only a Dorito crisp in a jar of salsa. This shows that the characters have similar interests and frames of reference to the intended audience.

In many ways the film is a buddy movie. The film's main weakness is that, as the film follows the friendship between Dante and Randal, it doesn't quite feel like it really gets going until Randal arrives almost 20 minutes in. Silent Bob is also far less expressive than he would be in later films, having not yet perfected the elastic slapstick face that can speak volumes without ever saying a word, while Jay is similarly only seen in an aggressive light. In short, the pair are pests rather than the comic relief characters they would grow into.

The film fails the Bechdel Test; although there are three named women as well as other strong women in important jobs, including coroner, they never really interact with each other.

Kevin Smith's mother Grace would reprise her role as 'milk maid' - someone who gets all the milk bottles out of the shop's fridge looking for a bottle with a best before date that is far ahead of all the others, with the aim of buying a milk that will never expire - in the very last frame of Clerks II.

There's a million fine-looking women in the world, but they don't all bring you lasagne. Most of them just cheat on you.

Jay and Silent Bob Will Return in 'Dogma'

Although Smith had had the initial idea in the back of his mind for Dogma while making this, he would take another two films before feeling experienced enough to bring his idea to the screen.

1It should be noted that 'Clerks' in this context is the American usage meaning lowly shop assistants, pronounced to rhyme with 'shirks', rather than the British usage meaning record-keepers eg in a bank or office and pronounced to rhyme with 'sharks'.2She left him when she went to college and started dating an 'Asian Design Major', just like Caitlin's fiancé in the film.3At the start of the film Dante's dog drinks water out of the toilet, but this is barely visible.4A film company founded by the infamous Harvey and Bob Weinstein in 1979 that had been sold to Disney in 1993, although the Weinsteins retained some executive power. When he was first shown Clerks, Harvey Weinstein walked out within ten minutes.5Gaining the dubious honour of being the most stolen VHS cassette from US video stores in the late 1990s.