'Clerks II' - the Film Content from the guide to life, the universe and everything 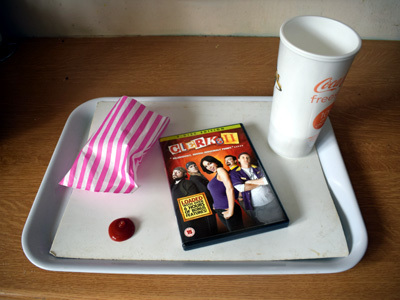 Clerks II (2006) is the sixth film in the View Askewniverse comedy series written and directed by Kevin Smith. These films feature the same characters and actors, particularly Jay and Silent Bob who act as loud-mouthed comic relief throughout. Clerks II is a direct sequel to the first film in the series, showing how the two main characters from Clerks are still, ten years on, in dead-end jobs. The film is 93 minutes long and is initially set at the Quick Stop convenience store seen in the first film but predominantly takes place at a nearby Mooby's Restaurant in Leonardo, New Jersey.

A year after the Quick Stop burnt down, Dante and Randal are 'funployees' making burgers and taking abuse from customers at a Mooby's Restaurant, selling fast food. It is Dante's last day there as he is about to move to Florida with his fiancée Emma. While his best friend Randal decides to secretly arrange a leaving party, booking an 'interspecies erotica' act to perform there that evening, Dante must come to terms with how he truly feels about his manager, Becky. Meanwhile, as they can no longer hang out outside the Quick Stop, 'reformed' drug dealers Jay and Silent Bob are constantly hanging outside the restaurant, leaning against the wall. Having found their faith they are no longer taking drugs, but are still selling them as it is the only way they know to make a living.

Who does Dante love? Can a racial slur be reclaimed? Which is the best Return of the film, Jedi or King? Who or what is Pillow-Pants? How will Dante react having faced his inferno? Will any wall be as comforting to lean against as the one outside the Quick Stop? Has Silent Bob finally run out of things to say?

Clerks in the Works: Making of

After the box office failure of Jersey Girl (2004), a film that cost $35 million to make (including £10 million for Ben Affleck and £4 million for Jennifer Lopez) but only made $36 million at the box office1, failing to recoup its production and marketing budget, Smith once more returned to the View Askewniverse.

This was a difficult decision for Smith to make as he had been offered the chance to direct big-budget superhero film The Green Hornet for Miramax. A lifelong comic book fan, Smith was sorely tempted to agree while his wife and friends advised him that making a small, low-budget film was a backward step compared to progressing to major blockbusters. In the end he decided that working on big budget films he would be answerable to those providing the finance, which would result in him losing control. He had also been disillusioned with making films featuring stars, and the intense media pressure that came with it, particularly the media's obsession with the stars' love lives to the point of having no interest whatsoever in the film itself.

Smith instead opted to make a low-budget comedy, surrounded by family and friends. He had initially hoped to make something on the scale of Chasing Amy, which had been made for only $250,000. His producer Scott Mosier, however, persuaded him that for full justice to be given to the film's aims, a budget of $5 million would be more realistic - bigger than that of Chasing Amy but smaller than Jay and Silent Bob Strike Back.

Clerks II was one of the first projects financed by film company TWC (The Weinstein Company)2. Weinstein felt the film should have been called Clerks II: The Passion of the Clerks3. It should be emphasised that though TWC financed the film, they were not otherwise involved in its production4.

Smith enjoyed reuniting with many of his close friends and colleagues that he had previously worked with. Even his mother and daughter make cameo appearances. The role of Becky had originally been written with his wife Jennifer Schwalbach Smith in mind. After Weinstein insisted on casting an A-list actress so that the film would have at least one star and to ensure someone would be invited onto chat shows to promote the film (all the lead male roles were played by relative unknowns), Jennifer was instead given the smaller role of Emma. It is now difficult to imagine anyone other than Rosario Dawson in the role of Becky, a part she enthusiastically makes her own. Jason Lee and Ben Affleck also briefly appear; Affleck was only supposed to have a silent cameo but improvised a short sentence. Lee filmed all his scenes during a Saturday off from making his television comedy series My Name Is Earl (2005-9).

The film begins and ends in black and white, recreating the spirit and look of Clerks. It was also deliberately filmed with a desaturated colour quality to ensure it was in keeping with the original film's cheap, worn aesthetic. The film is set in a Mooby's Restaurant, the franchise that had first appeared in Dogma, while Jay wears first a Buddy Christ T-Shirt and later a jacket labelled 'Justice TLF' (True Love Forever), referencing his girlfriend Justice who had appeared in the previous film.

Following the death of his mother in 2002, Jason Mewes battled various forms of substance abuse. Smith had promised Mewes that if he were able to get clean he could appear in his next film (Smith had replaced him on Jersey Girl). Mewes underwent a six month rehab course and stayed sober not only during filming but for the following three years until a short relapse in 2009 following surgery. Once again, like Smith's previous three View Askewniverse films Chasing Amy, Dogma and Jay and Silent Bob Strike Back, the film gathered a huge internet backlash before its release, this time from fans who felt that Clerks II would devalue and detract from the original. After its release, fans felt that actually it was a poignant film that built on the characters, showing them coming to terms with being in their 30s rather than their younger selves faced with life in their 20s.

Filming took place in New Jersey as well as California. The New Jersey sequences were those bookending the film at the Quick Stop, with Kevin Smith's childhood home used as the location for Randal's house. The most difficult part of production was finding an empty fast food restaurant in America where they could film the fictional Mooby's. They eventually found a disused Burger King in California; this building was due to be demolished as the restaurant was being relocated to new, larger premises closer to a major road. The set designers did such a convincing job of recreating the look of a fast food restaurant that throughout the production members of the public kept assuming it was a newly-opened burger joint. As the restaurant was located next to a hotel the hotel effectively became the production office as well as a place the cast and crew could stay.

One of the strongest films in the series; following the previous two road movies, this has a grown-up coherent plot of a day in the life of people flipping burgers. By having a smaller cast again, everyone has their moment to shine and a chance for their character to develop. Once more, numerous films are referred to and spoofed, including a memorable The Silence of the Lambs reference. A highlight has to be the argument over which film trilogy is better, Star Wars or The Lord of the Rings in general and more specifically Return of the Jedi versus Return of the King. The film even changes mood to include an uplifting dance sequence, which is even more impressive than the Silent Bob speaking moment.

Though the film concentrates on the bromance and potential break-up between Dante and Randal as well as Jay and Silent Bob, the film nevertheless passes the Bechdel Test. The one criticism is that we never really get to see Dante's fiancée Emma, or see her point of view, particularly regarding what drove her to want to marry him in the first place. The strong bond between Dante and Randal, and how they are both dealing with the prospect of no longer being with each other every day, dominates the film.

The film's credits end with:

Jay and Silent Bob may return. As for now, they're taking it easy.

1This film was made at a time when 'Bennifer' - Ben Affleck's relationship with his then girlfriend Jennifer Lopez - was being constantly broadcast everywhere by the media. After their film Gigli (2003) bombed (it cost $77 million to produce and recouped only $7 million), it was apparent that audiences did not want to see a film starring them. Jersey Girl's test screenings confirmed this, so most scenes with Lopez were removed from the final version of the film in order to persuade audiences to see it.2In 2005, Harvey Weinstein had fallen out with the Walt Disney Company over their control of Miramax, with disputes including claims that the Weinsteins were not paying their staff overtime and were not keeping proper company accounts. As a result, Harvey and Bob Weinstein co-founded TWC.3Though Dogma ended with the credit that Jay and Silent Bob would return in Clerks II: Hardly Clerkin', the film that Smith had in mind then became Jay and Silent Bob Strike Back.4In 2017 it was revealed that Harvey Weinstein was a sexual predator who had used his position of power to abuse and rape over 100 women. TWC declared bankruptcy soon after.