'The Lord of the Rings: The Return of the King' (2003) - Film Review Content from the guide to life, the universe and everything 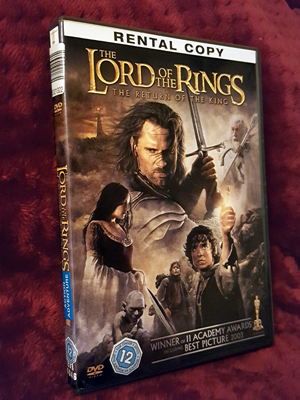 Tolkien's The Lord of the Rings is one of the most popular books of the 20th Century. Not only did it become a best-seller, making millions for its author1, but it has also been voted the best novel of the 20th Century by many different groups of readers. It is that rare occurrence, a best-seller that is also a work of literature.

The book is a large one, usually published in three volumes. Any film version is bound to be epic in proportions too. New Zealand director Peter Jackson decided to film the book as three films, and this trilogy has become one of the most successful sets of movies of all time. The first film, The Fellowship of the Ring was released in 2001. The second, The Two Towers, came out in 2002. Both were very successful.

The third and final film was released in December 2003 by New Line Cinema, with the rather cumbersome title of The Lord of the Rings: The Return of the King. It broke all sorts of box office records, was critically acclaimed, and was a spectacular and fitting conclusion to the trilogy.

The film is mainly based on the third volume of The Lord of the Rings, although it incorporates some material from the second volume.

Much of the film is taken up by the exciting and spectacular Battle of the Pelennor Fields. We had already encountered Jackson's skills in directing battle scenes in The Two Towers; here he takes it to the limit with the battle to end all battles. The forces of Mordor, led by the Lord of the Nazgûl, include orcs, trolls, and men from the East and South. The latter ride on Mumakil, giant elephants reminiscent of mammoths. The Forces of the West include the men of Gondor and the Riders of Rohan, with a sudden appearance of an army of ghosts as well. There is plenty of scope for special effects, action and general well-orchestrated mayhem. Highlights of the battle include Orlando Bloom as Legolas showing off the immense skill of the Elves, single-handedly attacking and killing one of the giant war-elephants, and the killing of the Lord of the Nazgûl by the shield-maiden Éowyn.

Frodo and Sam's encounter with the spider-monster Shelob has been moved from the second volume of the book to provide some dramatic action for the two hobbits. Jackson decided to create a Shelob that looks just like a giant tarantula - for those frightened by spiders, this one is terrifying. For the rest of us, Shelob is rather elegant, very different from the hideous, bloated, many-eyed creature of the book.

Once the Ring has been destroyed, the film takes a long time to end. At 201 minutes, it is a long film and is made to feel even longer by the constant impression in the last 20 minutes or so that it is just about to end.

Costing $94 million to make, the film took in $1.1 billion at the box office so it was certainly a success. This was only the second film ever to top $1 billion in takings, although this figure has been exceeded a few times since.

The Return of the King won 11 Academy Awards (Oscars) - only three films have ever done this, the others being Titanic (1997) and Ben Hur (1959). The awards received were:

The film did not win any awards for acting, possibly because there was no lead role in the film. The story follows a large number of different characters, giving each very little time for characterisation.

There was some good acting, nevertheless. Sean Astin as Sam really came into his own as the reluctant hero, and Ian McKellen as Gandalf was as good as he always is. Viggo Mortensen as Aragorn managed both to look cool while slaying orcs and to scrub up nicely for his own coronation, even getting to sing a small song.

On the other hand, Elijah Wood as Frodo had very little to do except look pained and wide-eyed. Some opportunities for good acting, such as Éowyn's frustration as she is unable to join the attack on Mordor due to injuries, and Saruman's mesmerising speech from the tower of Orthanc2, were omitted to keep the action moving briskly along and get it finished within three and a half hours.

For much of the film, acting took second place to special effects. 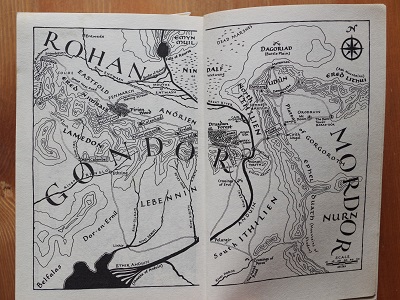 The plot of the film is more-or-less that of the third volume of the book, with a little bit from the end of the second volume.

Frodo the hobbit has been entrusted with the mission of destroying the One Ring, the master weapon of the Dark Lord Sauron before he retrieves it and conquers the world. The only place it can be destroyed is Mount Doom, the volcano right next to the Dark Lord's fortress in the land of Mordor.

Having defeated the forces of the wizard Saruman at the Battle of Helm's Deep, Gandalf and King Théoden confront Saruman in his fortress of Orthanc, and get the palantír, a magical communication device, from him. Pippin looks into the palantír and meets Sauron, the Lord of the Rings himself, face-to-face. Sauron assumes that this is the hobbit with the One Ring and that the Ring is now available to be used as a weapon by the Forces of the West. Gandalf deduces that Sauron will change his tactics and go for an immediate all-out attack on the West. The first point of attack will be Minas Tirith, the capital of Gondor and the only military power preventing him from conquering the world. There is no time to lose, so Gandalf takes Pippin directly to Minas Tirith to warn the people there. Aragorn goes by a different route, and Merry is left behind with the Riders of Rohan.

Meanwhile, Sam and Frodo pass Minas Morgul, the city of the Nazgûl, where they see Sauron's forces setting out to conquer the West, led by the dread Lord of the Nazgûl. The hobbits cross the mountains into Mordor. Their route takes them through the lair of a giant spider, Shelob. Frodo is stung by the spider, but Sam saves the day, rescuing Frodo and the Ring from both the spider and a group of orcs who capture him. The two hobbits escape and proceed in disguise through Mordor towards Mount Doom.

Denethor, the Lord of Minas Tirith, has lost all hope of defending his city and the West from the forces of evil. Gandalf takes things into his own hands. The forces of Rohan are summoned. The armies of Mordor arrive and surround the city, but the armies of Rohan arrive at daybreak and there is an enormous battle on the Pelennor Fields in front of the city. Aragorn arrives in the nick of time with an army of the dead, ghosts of faithless oath-breakers who had betrayed a previous king. They follow Aragorn to redeem themselves, seeing him as the King Returned. The battle is won and the forces of Mordor are repelled for a while.

Now the Forces of the West must keep up the pretence that they are using the One Ring. They want to distract Sauron and give Frodo a chance to reach Mount Doom. They travel to the gates of Mordor and order Sauron to surrender. There is another battle, the details of which are glossed over in both the book and the film, as the more important action is happening elsewhere.

Frodo reaches Mount Doom, but is overpowered by desire for the Ring - at the last moment he refuses to destroy it, but instead puts it on. Gollum appears out of nowhere and gets back the Ring by biting off Frodo's finger. In the confusion, Gollum slips and falls with the Ring into the volcano's lava. The Ring is destroyed and Sauron and his Dark Tower with it. The forces of Mordor, without the leadership of Sauron's immense will, are easily defeated.

The world has been saved. People celebrate. Aragorn is crowned King of Gondor and marries Arwen. The hobbits go home and find that nothing has changed. Back in the Shire they are just ordinary people. But Frodo's spirit has been broken by the effort of carrying the enemy's Ring for so long. He travels across the sea to the undying lands, along with Gandalf, Elrond, Galadriel and the now immensely old and decrepit Bilbo.

Changes from the Book

The DVD and the Extended Edition

The film was released on DVD in May 2004, and in December 2004 an Extended Edition of the DVD was released with 50 minutes of extra footage. Despite being nearly an hour longer, this contained only a few extra scenes - most of the additional material was small changes to the original film. To the disappointment of some hard-core fans, the Scouring of the Shire section of the book was still not included.

Jackson has always insisted that the Extended Editions of his films are not 'Director's Cuts'. He was happy with the version of the film released in cinemas, but wanted to show Tolkien-lovers all the little extra bits that he filmed but was not able to include in the cinema version.

A triumph of special effects and fabulous New Zealand scenery, this film is a spectacular and fitting conclusion to the trilogy.

1Because the publisher didn't know whether the book would sell, he offered Tolkien half shares in the profits.2This scene, with Christopher Lee as Saruman, was included in the Extended Edition DVD.