'Melody Time' - the Disney Animated Classic Content from the guide to life, the universe and everything 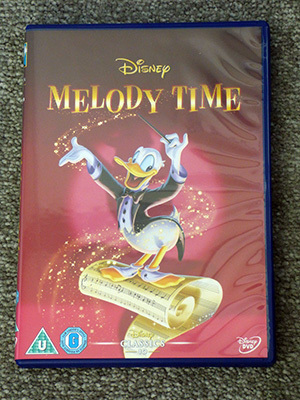 Melody Time is an animated musical anthology film by Walt Disney Productions. In traditional Disney style it features a blend of humour and poignancy.

Walt Disney Productions (now known as Walt Disney Animation Studios) is a pioneering animation studio. It first synchronised sound with animation in the Mickey Mouse cartoon Steamboat Willie in 1928, and first created animations to accompany music in the 'Silly Symphonies' cartoons (1929-1939). In 1940 Fantasia was released in cinemas - it features animations inspired by pieces of classical music, plus scenes combining animation and live action. Although it failed to make a profit when it first appeared in cinemas, Fantasia has become known as the third Disney Classic.

Melody Time, the tenth Disney Classic, again features animations inspired by pieces of music. Released in cinemas in 1948, it could be considered to be seven Silly Symphonies stuck together. Cheaper to make than Fantasia, but not as cheap as its predecessor Make Mine Music had been, it failed to make a profit on first release. No further compilation films of this type were made for 50 years - until the release of Fantasia 2000.

A variety of different types of music and styles of animation were used, creating an eclectic mix of scenes in the film. Some are funny while some are sad and others are more artistic.

Melody Time was released on DVD in 2014 with three short cartoon special features. The first is Casey Bats Again (1954), the sequel to 'Casey at the Bat', which was a segment from Make Mine Music4, featuring an overconfident baseball player. In this animation, the next generation of Caseys takes to the field5. The second short is Donald Applecore (1952) - in contrast to 'Johnny Appleseed', Donald fights the chipmunks (Chip 'n' Dale6) to protect his crop, using weapons like insecticide and even an 'atomic pill'. Lastly, there is Lambert the Sheepish Lion (1952) - in contrast to 'Pecos Bill', a lion is raised by a sheep. At first the other sheep mock him for being different but, when a wolf threatens the flock, Lambert saves the day.

1The rabbit from Disney's 1942 film Bambi.2Figuratively and literally.3Who made his first appearance in The Three Caballeros (1944).4Which begs the question: why was 'Casey Bats Again' not included on the Make Mine Music DVD?!5Casey also learns an important lesson - at first he was pleased that his baby was brilliant with a baseball mitt, but when he found out the baby was a girl he dismissed her talent - fortunately there was a women's baseball league, so all was not lost as he had thought.6Who first appeared in the 1943 short Private Pluto.