'Make Mine Music' - the Disney Animated Classic Content from the guide to life, the universe and everything 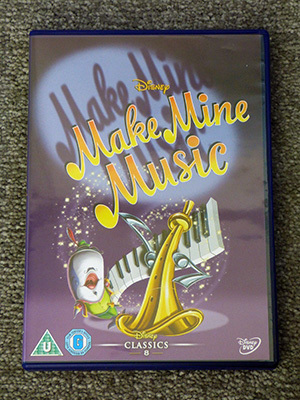 Make Mine Music is a 1946 animated musical anthology film by Walt Disney Productions. In traditional Disney style it features a blend of humour and poignancy.

Walt Disney Productions (now known as Walt Disney Animation Studios) is a pioneering animation studio. It first synchronised sound with animation in the Mickey Mouse cartoon Steamboat Willie in 1928, and first created animations to accompany music in the 'Silly Symphonies' cartoons (1929-1939). In 1940 Fantasia was released in cinemas - it features animations inspired by pieces of classical music, plus scenes combining animation and live action. Although it failed to make a profit when it first appeared in cinemas, Fantasia has become known as the third Disney Classic.

Make Mine Music, the eighth Disney Classic, again features animations inspired by pieces of music. Released in cinemas in 1946, it is essentially ten Silly Symphonies stuck together. Cheaper to make than Fantasia, it made a profit on first release, leading to another compilation film Melody Time1, the tenth Disney Classic, being released in 1948.

A variety of different types of music and styles of animation were used, creating an eclectic mix of scenes in the film. Some are funny while some are sad and others are more artistic.

Make Mine Music was released on DVD in 2013 with three short cartoon special features. The first is a Mickey Mouse short called Symphony Hour (1942) featuring Mickey and friends in an orchestra. Goofy has a mishap so the instruments are damaged, but the orchestra plays on regardless. Mickey struggles to hold everyone together, even resorting to threatening Donald Duck with a gun at one point, but 'the show must go on' and the audience enjoy the results. The second short is Band Concert (1935) - again Mickey is a conductor and his friends are the orchestra, playing Rossini's 'William Tell Overture' in a park. There are various distractions, including Donald playing a different tune and a storm springing up, but the band carries on. Lastly, there is Farmyard Symphony (1938), a Silly Symphony featuring the sounds made by farm animals when it is feeding time one morning.

1Melody Time was more expensive to make, and did not make a profit on first release.2The sequel cartoon 'Casey Bats Again', in which the next generation of Caseys take to the field, appears on the DVD of Melody Time rather than the DVD of this film, presumably to encourage people to buy both.3Prokofiev had met Walt Disney in 1938.