'Saludos Amigos' - the Film Content from the guide to life, the universe and everything 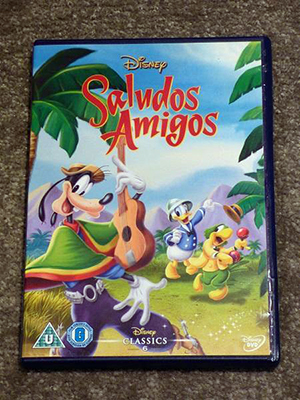 Saludos Amigos is a Disney film made predominantly for the South American market in 1943. It intersperses short animated scenes with clips from a live-action documentary. At just 42 minutes long, it is the shortest feature-length film made by Walt Disney Productions. This was a film made quickly and cheaply, in many ways simply in order to keep the studio going at a time of chaos and crisis. However, unlike more prestigious Disney films made in the 1940s such as Pinocchio, Fantasia and Bambi, Saludos Amigos made a modest profit.

Saludos Amigos is known as the sixth Disney Animated Classic film, despite featuring live action as well as animation. This was Disney's third feature-length film to combine both live action and animation, following Fantasia (1940) and The Reluctant Dragon1 (1941).

'Saludos Amigos' means 'Hello Friends' and this film aimed to introduce audiences to the culture of South American countries, including Brazil and Argentina, and thus encourage good relations between the USA and South America during the Second World War.

The film begins with Walt Disney and his team making a journey to South America. The first stop is Lake Titicaca in Bolivia. There the Disney artists sketch people and scenes. Donald Duck is then introduced in an animated segment. Donald plays the role of a tourist - first he discovers the effects of altitude sickness by the mountain lake and then he takes a 'balsa' boat to the marketplace where he tries on a native costume2 and plays with a llama.

Meanwhile, the animators travel to Chile where they draw a cartoon based on the Mail Plane that crosses the Andes (the mountains between Chile and Argentina). Pedro the baby plane goes to school to learn the route over the Andes and then one day when his parents are ill it is his turn to transport the mail. At first Pedro doesn't take the mission seriously, but when a storm arrives he finds his inner strength.

Next the artists go to Buenos Aires in Argentina but leave the big city to meet the Gauchos (like cowboys) and watch the Argentine country dances (like North American square dances). Goofy is then introduced in an animated segment. He plays a cowboy from the Texan Prairie who visits the Argentine Pampas. There he puts on a Gaucho costume, learns to saddle a horse, hunts an ostrich and dances with the horse. He is then wafted back to Texas on the breeze.

Finally the team travels to Brazil, and Rio de Janeiro. They see the statue of Christ the Redeemer and study the mosaic sidewalks (pavements) before sketching birds, plants, people and scenery. The 'Old Papagaio' bird of Brazilian legends inspires the creation of a new Disney character: José Carioca. 'Joe' Carioca meets Donald Duck and takes him on a tour of the town. Donald tries chilli sauce and learns to dance the Samba - the pair follow the mosaic waves on the sidewalk to various nightclubs and then dance the night away.

The film is narrated by Fred Shields. He describes the events depicted in Walt Disney's silent 16mm holiday film footage as well as narrating the short animated films. Some scenes in which music appears were later dubbed with the appropriate instruments. Among the Disney artists in South America were Lee Blair, an Olympic Gold Medal-winning artist3 and his wife Mary Blair. Mary was one of Disney's most talented and influential artists and Imagineers. She not only developed concept art for Disney films made in the 1940s and 1950s, but also created the look of the It's a Small World After All ride in Disneyland.

Other team members included Norman Ferguson, an animator most famous for creating the look of Pluto, and Frank Thomas, one of 'The Nine Old Men' animators at the core of Disney. Thomas was the Directing Animator on many Disney films made from 1940 to 1959. As a tribute to his work, he was asked to provide the voices for cameo characters in The Iron Giant (1999) and The Incredibles (2004).

Donald Duck made his first appearance in 1934 and is one of Disney's most popular characters. In fact, he has appeared more often than any other character, including Mickey Mouse. When Mickey Mouse became a cultural icon and was considered a role model by many, Donald was created in order to be Mickey's naughty comic foil who is led into trouble by his short temper. As well as appearing in 150 short films, including the Oscar-winning Der Fuehrer's Face (1942), Donald has appeared in numerous full-length films. These include Disney Classics such as The Three Cabelleros (1944), Fun and Fancy Free (1947), Melody Time (1948) and Fantasia 2000 (1999). He has also appeared in other Disney films such as The Reluctant Dragon (1941), and performed opposite Daffy Duck in Who Framed Roger Rabbit (1988). Donald was first voiced by Clarence Nash in 1934; Nash last played Donald in 1984, 50 years later.

Goofy is a dog first created in 1932 under the name 'Dippy Dawg' but was renamed 'Goofy' in the same year. Appearing in numerous short films, both on his own and also with Mickey Mouse and Donald Duck, he was one of the most popular Walt Disney characters. He was voiced by Pinto Colvig, who also voiced Munchkins in The Wizard of Oz and Sleepy and Grumpy in Snow White and the Seven Dwarfs. In 1938 Colvig left Disney Studios; in the 1940s Goofy appeared in a series of How To short films in which his actions were described by a narrator to avoid the need for him to have dialogue. Goofy had his own television series, Goof Troop (1992-3), about his relationship with his son Max. This led to films A Goofy Movie (1995) and An Extremely Goofy Movie (2000). He last appeared in a short film How to Hook Up Your Home Theater, in 2007, to test a new animation technique that combined hand-drawn and digital animation - the technique went on to be used in The Princess and the Frog (2009).

José Carioca is a dapper Brazilian parrot who made his first appearance in this film. A green bird with a yellow beak, he usually carries an umbrella and cigar and wears a bow tie and hat. He went on to appear in The Three Caballeros (1944) and 'Blame it on the Samba' in Melody Time (1948), as well as briefly appearing in Who Framed Roger Rabbit. José Oliveira was the multi-lingual voice artist who voiced José Carioca and also dubbed many Disney films into Spanish, Portuguese and Italian.

The short animated films featuring Donald, Pedro, Goofy and José had originally been produced separately, following the 1942 documentary South of the Border with Disney. The 30-minute programme shadowed Walt Disney and 18 of his artists, writers and musicians as they went on a tour of South America to gather inspiration. Some of the footage from the documentary was then used to link the animated segments together into Saludos Amigos.

In addition to the scenes incorporated into the film, the documentary also showed the temporary animation studio in Rio. The team watched an Independence Day Parade, saw 30,000 children singing in a stadium conducted by renowned composer Heitor Villa Lobos, went to Sugarloaf Mountain, visited the Botanic Garden and went to the zoo.

They also visited Montevideo in Uruguay, Tito in Ecuador, and Bogota in Colombia. On the way back to Hollywood, they stopped in Nicaragua, El Salvador, Honduras, Guatemala and Mexico - these visits would go on to inspire the seventh Disney Classic The Three Caballeros.

In 1941, the studio had begun working for the Co-ordinator of Inter-American Affairs, the US State Department body designed to strengthen ties between the United States and Latin America. This was headed by Nelson Rockefeller4. The studio was to be paid $150,000 to make short films about South America to be shown there, in order to counteract the Axis propaganda the countries were being exposed to and to bolster US/South American relations during the Second World War.

Saludos Amigos was not the only film in progress at the time, with the government also commissioning Disney to make a series of educational films for the South American audience. These included The Winged Scourge, in which the Seven Dwarfs combat the malaria-carrying Anopheles Mosquito by spraying oil on water to kill mosquito larvae, using arsenic-based Paris Green pesticide throughout their house, and burying rubbish in their garden. Later films were part of the 'Health for the Americas' series, and included titles such as Cleanliness brings Health, The Unseen Enemy and Planning for Good Eating. These emphasised the importance of keeping clean, not using cornfields as latrines, preventing the spread of germs, and eating a balanced diet. The experience also inspired Pluto and the Armadillo (1943), a short film more in Disney's traditional style.

Saludos Amigos was assembled in July 1942 and shown to Rockefeller and President Roosevelt, who heartily approved. It was then released to a huge success in South America.

Saludos Amigos was made with three aims:

As a historical record, Saludos Amigos is a fascinating look at US perceptions of South America in the mid-1940s. As a film it is less coherent; there is no denying that it is a compilation consisting of four short films essentially held together by Walt Disney's home movie of his holiday in South America.

1The Reluctant Dragon is not officially considered a Disney Animated Classic.2Or rather makes off with a boy's clothes.3For painting 'Rodeo' at the 1932 Olympic Games in Los Angeles. The Olympics awarded medals for art as athletics between 1912 and 1948.4Nelson Rockefeller later became American Vice President under Gerald R Ford (1974-1977). He should not be confused right about now with Fatboy Slim's song 'The Rockafeller Skank'.