Llamas Content from the guide to life, the universe and everything

The llama is a domesticated herbivorous shaggy quadruped. A native of South America, it lives mainly in the high country of Peru, Bolivia, Ecuador, Chile and Argentina.

Llamas are generally white, but they can be solid black, solid brown or white with black or brown patches. The llama has quite a slender body, thin legs and a long neck with a camel-like head and long ears like a donkey. But the body is so covered in shaggy fur that llamas can look very fat. A llama is about 120cm (48") high at the shoulder and weighs about 110kg (250lb).

The llama has rubbery lips, all the better to gather up a really juicy mouthful of spit, a bendy neck for maximum accuracy when aiming at unsuspecting tourists, and long eyelashes, all the better to flutter its lids innocently at the next unwary victim who dares to say 'Gee, what an enormous goat, Elmer!'

Llamas also have low-slung backs, suitable for carrying huge basketloads of firewood, camping equipment, potatoes, tacky souvenirs or anything else you think you might need when halfway up the Andes. Some people think they have to load each item onto the llama one at a time, stepping back slowly and carefully, then letting their friends have a turn - but they are probably confusing real life with the game 'Buckaroo', and shouldn't be encouraged.

The word llama1 means 'flame' in Spanish, but how anyone thought that nomenclature should applied to this particular creature is a bit of a mystery. It's doubtful that the conquistadors arrived in South America and were immediately confronted with the sight of herds of blazing llamas sweeping majestically across the pampas. Nor are there any ancient Inca myths about a sacred llama being reborn from some flames (like a phoenix) and llamas can't survive the raging fires of Hell, like a salamander, to account for the name. A more promising line of enquiry might be an early Inca barbecuing disaster, or, perhaps more credibly, the burning sensation caused by the acidic nature of the creature's spittle. Whatever the etymology, setting fire to any llamas you may come across to see how combustible they are is not recommended.

Llamas should not be confused with those wise old Buddhist men that sit on hilltops seeking enlightenment. They are lamas, with just the one 'l'. Anyone accosting a llama on a mountainside and hoping for a few words of mystical wisdom is likely to get a faceful of spit. Frustrated lamas with one 'l' who were hoping to get a bit of peace and quiet without being pestered by naive Backpackers every ten minutes are advised to take up the same approach.

Llamas belong to a family called 'lamoids' that includes the alpaca, the vicuña and the guanaco. While guanacos and vicuñas live in the wild, all llamas and alpacas are domesticated.

Llamas and all the other lamoids are related to camels, who also are famous for spitting. The first camel-type animals lived in North America many million years ago. Some of these went south and became lamoids. Others went across the land-bridge to Asia and became camels. The ones in North America died out as recently as 10,000 years ago, in the last Ice Age. Llamas and the other lamoids lack the camel's fat-storing hump, but like camels they are good at surviving on very little water.

The scientific species name of the llama is Lama Glama, with only one 'l' to confuse the Buddhists. Most scientists treat the other lamoids as separate species, although they can interbreed. Of these, the vicuña is the most different from the other three; llamas, alpaca and guanacos are similar enough to each other that it is thought that llamas and alpacas were bred from guanacos thousands of years ago.

Llamas eat mainly grass, although they will eat just about any plant. They are generally intelligent, friendly and placid, but if you make them cross, they will hiss, kick and (did we mention?) spit. Spitting is the normal way that llamas express negative feelings towards other llamas. If they like each other, they will hum.

Llamas generally produce young in the late summer and autumn. The female llama gives birth to a single baby which is known as a 'cria'. Llamas live for about 15 to 20 years. 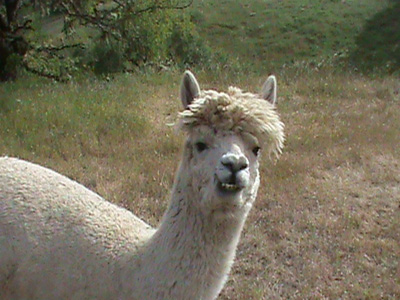 Llamas' shaggy coats can be used for making wool: the farmers generally shear the llamas every two years. The wools isn't as good quality as the wool of the alpaca, but is useful nevertheless. Llamas can also be used as food, but they are more commonly used as beasts of burden, carrying loads of up to 60kg on their backs. In fact, before horses and donkeys were introduced into South America, they were the only pack animal available. They can also pull small carts, but this is not done in South America because mountain tracks are not suitable for wheels.

Llamas are no longer confined to South America. There is a growing industry of llama farming in North America as well.

North American sheep and cattle farmers have the problem of wild dogs, coyotes or even mountain lions attacking their animals. Many use guard dogs, who live in the pastures and drive off any intruders. These guard dogs do not help to herd the sheep or cattle in any way; they are purely for protection.

It has been found that llamas can serve the same function. A llama introduced to a field of sheep or cattle will watch out for intruders and drive them off. Llamas particularly dislike dogs, so they will guard the flock well against wild dogs and coyotes. Llamas are most effective in fields smaller than 300 acres - if the field is bigger than this, a guard dog should be used instead. If the llama is a male, it is recommended that a gelded male is used, to prevent him being distracted from his duties by particularly good looking ewes.

Another use of llamas which is on the increase is wilderness trekking. Hikers use llamas to carry their luggage, tents and camping equipment, enabling them to trek comfortably, covering distances of 13 or 14km (8 or 9 miles) a day. Since a llama can go more or less any where a human can walk, they are the ideal pack animal. It is recommended that the llama's load is not more than about 40kg (90 pounds), unless the animal is in very good condition.

1The name 'llama' is usually pronounced 'lama' in English, but in Spanish the double l introduces a sort of y sound like the ll in million. So the correct pronunciation is more like 'lee-ama'.