Backpackers Content from the guide to life, the universe and everything 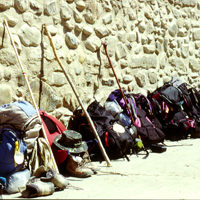 The Backpacker is a strange variant of human traveller. So called because they carry the majority of their needs1 in a custom-designed pack upon their shoulders, the backpacker is often found hunched over in the pouring rain on the side of a motorway, or seated precariously on their charge at a bus, train or airport terminal. The name can be applied to anyone who carries a pack on their back, and there are two distinct variations on the same theme, the first being the traditional backpacker that straps on a pack for the purposes of 'rambling' or hiking (or even cycling) around the countryside. The second is the more common 'globetrotters', who are (usually) young, bright-eyed, a bit short on 'dosh'2 and eager to explore the world (or in most cases Europe), hoping to find that special place during their journey. Or perhaps look inside themselves, if they have a bit of yearning for that kind of thing. This Entry will concentrate on the latter.

Backpackers of the travelling kind vary, dependent on where they originated:

All types of backpacker can be anything from the incredibly excitable, who will rattle off explicit details of the mountain pass to the tiny village they found in the foothills of the Andes only because they hitched a ride on the back of a rusty old truck full of hay and pigs that they didn't really know where it was going, but that doesn't matter does it because it's great and you just have to see it, it's simply marvellous! - to the exhausted grunter who has stood in line with their weighty pack on for the entire morning simply to be able to put it in a locker for a few hours so they can see the sights on offer.

Backpackers are, to cut to the chase, tourists. As such they often carry with them phrasebooks to help them speak with the indigenous peoples of the countries they are visiting, but any type of fiction book is the norm, especially a nice thin well-worn paperback. A book helps them no end when they are sitting waiting for a ride, or trying to pass the time until the next shower becomes free. Backpackers make good use of the BookCrossing principle too, and love to trade books, so will appreciate anyone who offers them something new to peruse.

Backpackers also festoon their packs with all manner of markings to assist in recognition, many applying a cloth patch of the flag of their own nation, so when meeting other backpackers will be able to identify countrymen. A Youth Hostel patch is also common, but more important are cultural or political markings such as the peace symbol, 'no nukes', or images representing popular musicians/bands.

Some can be very serious in their endeavours, and will be wearing the most expensive and up-to-date backpacking equipment, including sturdy hiking boots, slimline waterproofs, fully adjustable packs and will rattle like a tinker with all and sundry hanging off them. Others will perhaps not be quite so prepared, but still enjoy their adventures, while there are some who will simply wear canvas shoes, shorts, t-shirt, sunglasses and carry their pack with an air of confidence and arrogance that will sustain them for their entire journey. And a credit card.

Where can you find backpackers? Youth Hostels or, funnily enough, Backpacker Hostels. In fact, any cheap and affordable accommodation is a must for the backpacker. Some have been known to carry tents with them and will pitch these in a camping site for a nominal fee, or in the middle of nowhere (so they think) to be woken rudely in the morning by either:

As mentioned, backpackers will also be found at any transport terminal, waiting to cram themselves onto the type of transport going to their chosen destination. Their often large backpacks make it nigh-on impossible for them to see anything behind them, effectively creating a blind-spot, so forget it if you need to pass one in an aisle, or indeed sit comfortably anywhere in the vicinity. This is especially evident in any major city with a train system such as London's Underground, where a general ignorance to any etiquette is an every day occurrence.

The other places you will undoubtedly find backpackers, somewhat annoyingly, are the most magnificent places in the world. From hard to find beaches in Sri Lanka, to the tops of mountains in Africa where the clouds stray around feet and waterfalls rumble, to areas of the Amazonian rainforests that are rich with wildlife, to the quiet peaceful hillside in Scotland that looks out over the fens. It is these places that inspire many to don a backpack and trek off into uncertainty, and perhaps find that little piece of Heaven on Earth5. Lucky so-and-so's.

Backpackers generally travel as individuals, or in mating pairs, with a spirit of independence and adventure coursing through their veins. While the majority of backpackers you'll find in the street are young and keen would-be Bill Bryson's looking for the next free meal, many are actually hardened adventurers rather than travellers out to see the sights, and put their packs on to trek up into the back of beyond and white-water raft down some rapids, or base-jump off a cliff. Be wary of these 'wilderness' backpackers, if they get their claws into you, you never know where you might be whisked off to, and what you might be thrown into, off of, up, or at. And once bitten...

Unfortunately, being pack animals in the truest sense of the word, mobs of young backpackers have sometimes been known to swarm onto public transport making loud noises in their native tongue, pointing at maps, and generally making life miserable for the other transport users, so if possible it's wise to give them a wide berth6. The backpacker will, on occasion, also have quite an offensive aroma, a mix of stale sweat, muesli and dirty linen. It is not known if this is a defensive ploy to ensure they are not approached by other humans, or simply because they couldn't find somewhere to wash themselves or their clothing at their most recent sleeping spot.

Despite travelling in numbers and their sometimes disgusting smell, backpackers have also been the prey of other humans in the past7, and many parents become increasingly concerned when their offspring express a desire to go backpacking. This has led to many backpackers being given a 'phonecard' - a small plastic card that enables them to telephone home from anywhere in the world, so they can check in to their parents. And ask for more money.

Backpackers usually have limited funds, so high class restaurants are not on the menu as such. Many like to pay their way by working as they travel, and orchards of various sorts will hire seasonal help to pick produce - be it olive, tomato, apple, chestnut, orange, berries or grapes. The bonus for the backpacker is they either get money to pay for lodging or food, or get free food and lodging in return for their hard work. This aspect of backpacking is something that appeals to the many as they get to make new friends, work for a living, but are not tied down. Some backpackers will also offer themselves to other types of work, and a holiday camp or kibbutz are popular amongst their kind.

For general everyday food though, market stalls, cheap take-away or pubs offering soup and bread are much more likely to provide the necessary nourishment for the backpacker on the move. However, some will carry their own food with them, and method of cooking and eating. This is often a mix of canned and dried goods, full of vitamins and healthy goodness, but with no flavour whatsoever. Others will include in their rations 'energy' bars or chocolate, while others carry items with them for trade purposes such as cigarettes, hotel soaps/shampoos, or unwanted currency like the euro.

Backpackers are generally pretty harmless. There have been instances of other people being injured when a backpacker swings themselves about wildly, their heavy backpack crashing into poor unfortunates and knocking them to the ground. In general though, you can keep any backpacker happy by showing them the way, offering them a lift or a little food. Language difficulties are common, but often overcome with the use of basic sign language, or a card game. This Researcher's advice if you happen to come across a backpacker? Don't show them fear, but equally don't treat them as if they are inferior. All they need in most cases is a little understanding, maybe an ear to bend, and a hot meal. And probably a bath.

1Clothes, towel, food, bedroll, sleeping bag and other assorted belongings.2Cash, money, trading beans.3Time off between finishing secondary school and beginning tertiary education.4It is not unknown for some backpackers to buy a cheap car, like a Volkswagon 'Kombi' to help them tour a country, especially Australia.5Which, if they tell someone, will become in short time a tourist mecca. This can be viewed as either a good thing, or a very bad thing.6Both physically and metaphorically.7Being victims of serial killers, rapists and murderers in a variety of countries.