The Koan in Zen Buddhism Content from the guide to life, the universe and everything 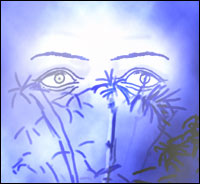 Towards the end of the T'ang Dynasty in China the term ko-an was used to mean a public document or authoritative statute. Within the discipline of Zen Buddhism, however, a koan came to refer to a statement used by a Zen master to bring about a state of realisation (or satori) in a novice under his guidance. A koan consists either of an anecdote involving one of Zen's ancient masters, a dialogue between a master and monk, or a phrase or question put forward by a master for his1 student to contemplate and understand, so opening up his mind to Zen.

If the koan is an integral part of Zen, this raises the question: 'what is Zen?' This is very difficult to answer within the limitations of this entry, so, to keep within the tradition of Zen, perhaps it is best not to answer it directly since one of the requirements for studying Zen is an inquiring, searching mind. Although the matter is mostly in the hands of those who wish to grasp Zen, it is also in the nature of Zen to unfold itself with guidance, so maybe the links here will assist those who wish to search deeper. A good introduction to Zen would be the work of DT Suzukiand Alan Watts, who are principle figures in the introduction of Zen Buddhism into Western culture.

How the Koan System Arose

Zen managed to survive for many years without the need for a system of koans. Students would present the master with a question relating to Zen, which enabled him to gauge the mind of the student and give the student the necessary guidance towards satori. Since the question was the outcome of intense mental effort on behalf of the student and therefore represented a crisis of mind, it was often the case that the master would need to wait some considerable time for the student to bring his question forward. Just to ask the question meant the crisis had been reached and the mind was ready to leave it behind. The skillful master knew how to lead the student past this necessary crisis and help him attain satori.

Through this process many of the questions and answers exchanged between students and masters were recorded in Zen literature. This led to the problem of Zen practitioners intellectualising these questions and answers - pushing them outside of Zen experience - so it became necessary to develop a way to avoid this. A system arose of selecting some statements relating to Zen (which are now known as koans) and presenting them to the novice for him to contemplate and understand. The Zen master, through the novice's interpretation of the koan, could then observe the workings of his mind and guide it to Zen consciousness.

The Koan's Place within Zen

In order for Buddhists to master the intricacies of Buddhist metaphysics and to keep their 'passions' under control they are required to observe three principles2:

Originating in India and spreading across the East, zazen means to sit cross-legged in silent contemplation. Followers of Zen still strictly observe this; zazen is used as the means to search for the solution to a koan. Zazen and the koan are therefore the two fundamental tools of Zen.

The Aim of the Koan

To those who first encounter the koan it can have the appearance of little more than a riddle or a puzzling remark, but to try to understand it from this perspective would be to miss the point of Zen. The first intention of the koan is to arouse doubt and push that doubt to the furthest limit. A few koan examples may (or may not) be helpful here3:

The Sixth Patriarch was asked by a monk named Myo what Zen was. He replied:
'When your mind is not dwelling on the dualism of good and evil, what is your original face before you were born?'

A monk asked Chao-chou (a Zen master), 'What is the meaning of the First Patriarch's4 visit to China?'
Chao-chou answered, 'The cypress tree in the courtyard.'

It is evident from these statements that the koan is not logical; it represents the expression of a certain mental state resulting from Zen discipline. The student will consider the koan and in time present his interpretation to the Zen master through an interview (called a san-zen). The master, in his exchange with the student, will exhaust all possible rational or metaphysical interpretation of the koan until the student feels he has reached an impasse. No student can study Zen without reaching this point, and it is only now he will truly begin to study Zen.

From this it is apparent that the exercise of contemplating the koan is meant to compel the student to go beyond the limits of the intellect; to open up the mind so he can question what has so far been his accepted view of the world. The aim of the koan is therefore to encourage the student to inquire and to search deeper, nurturing that part of the mind where no logical analysis can reach; to transcend the duality of the senses and the relativity of all things so the student can view the world as a whole. When the student is attuned to this part of the mind the koan will reveal itself.

How the Koan Reveals Itself

Numerous practitioners of Zen have recorded their progress towards enlightenment or satori and from this it is possible to summarise the general process of how the koan reveals itself. The novice will spend a great deal of time contemplating the koan, trying to pass its illogical surface. The struggle to pass this barrier seems impossible and there is only a great sense of frustration and agitation. When this point is reached, the student, with renewed effort, will throw all his energy and his entire being into reaching a solution until, completely immersed in this struggle, the koan will slowly and unexpectedly reveal a region of his mind - that part which reaches beyond logical dualism and awakens an inner realisation of the actual workings of the world.

For the first time, the meaning of the koan will become clear and the value of Zen understood, revealing to the student there is something more than the rational world or mind that had previously been closed to him. Once the koan has been comprehended and the obstructions of the mind cleared away, the student returns to everyday rationality, and Zen becomes the most ordinary thing in the world.

The koan has been described as a piece of brick used to knock at the gate, so when the gate is opened the brick can be discarded. It is only useful when the gate is closed, and when satori has been achieved the koan can be forgotten. Satori is the whole of Zen and without it there is no Zen. Zen masters describe satori as: 'the state of consciousness in which Noble Wisdom realises its own inner nature.' And this is ultimately what the koan will lead to.

Open Your Own Treasure House

1Throughout this entry, the terms 'him', 'he', etc have been used. Unfortunately, Buddhist literature mainly refers to male followers of Zen, so this entry follows that example for simplicity. It does not imply that all followers of Zen were, or are, male.2The Guide Entry, Siddhartha - The Man Who Became Buddha, gives a more informative overview.3See the NoZen website for more koans.4Buddha was the First Patriarch.